The Daily Northwestern • May 10, 2015 • https://dailynorthwestern.com/2015/05/10/campus/students-turn-out-for-ao-dm-benefit-concert-despite-indoor-venue/ 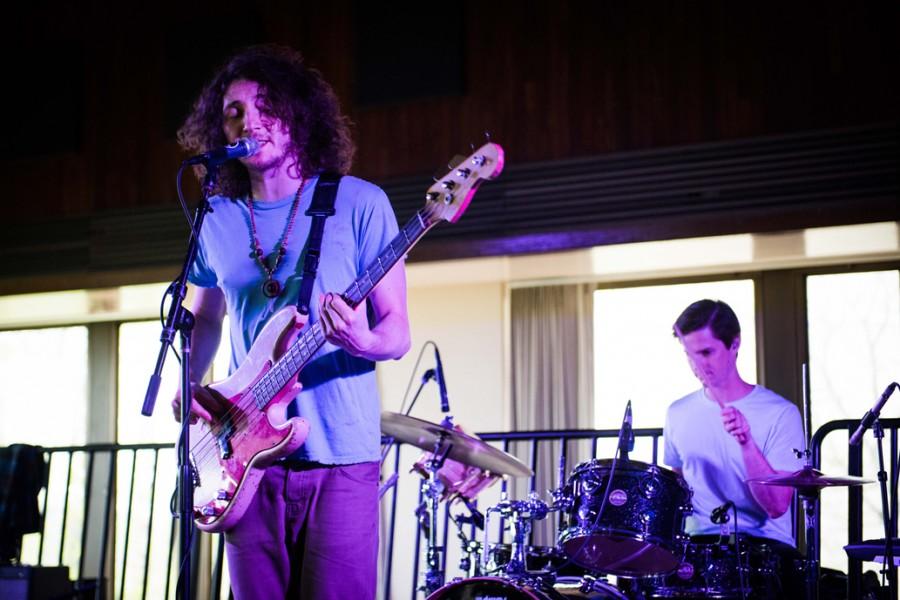 Students gathered Saturday afternoon inside Norris University Center to listen to alternative-pop and soul music and to raise money for next year’s Dance Marathon beneficiaries.

A&O Productions and DM’s annual Benefit concert featured Vacationer and The O’My’s. Due to bad weather forecasts, it was held inside the Louis Room. The concert is usually held on the Norris East Lawn.

The O’My’s, a Chicago-based band, kicked off the event with soul music. The crowd grew throughout the band’s set, swelling to about 100 by the time Vacationer, the concert’s headliner, took the stage. An alternative-pop band, Vacationer had students dancing throughout the performance.

“Making music is the best thing in the world, and we get to do it for a living,” Kenny Vasoli, the band’s lead singer, told the crowd. “Shows like this really help us going on the road.”

Morgan Hecht, A&O’s concerts director, said the concert was a success despite the indoor venue. A&O also had to hold the concert indoors three years ago due to rain.

“Both of the bands have enough of a stage presence that it worked for people all the way in the back playing the games or people in the front,” the Communication senior said.

A&O’s outgoing chairwoman Tracy Kopulsky added that the concert helped expose students to new music, which is one of A&O’s goals.

“A student said to me how each of these bands just gained a new fan today,” the Communication senior said. “That’s something we love to hear — that we are exposing students to new music that they didn’t know before, that they can go home and listen to and love.”

Entry to the concert was free, but attendees were encouraged to give a $5 donation.

DM spokeswoman Kalli Koukounas said Benefit is a great way for the organization to kick off its fundraising efforts for next year.

“It’s a fun, first introductory event,” the Weinberg sophomore said. “People seemed to have a lot of fun. I really liked the bands. It’s kind of a bummer that it wasn’t outside, but I think people still had fun.

DM also organized games of water pong and corn hole to raise money for the beneficiaries, one of which will be the Evanston Community Foundation. The group has partnered with ECF since 1997. The primary beneficiary has not yet been announced.

Koukounas said DM had not yet counted how much money was raised at the event.

“Students were super generous. I saw tons of kids giving dollars whenever they could and buying posters,” said A&O spokeswoman Abiola Aderonmu, a Communication senior. “That’s what it’s really all about. It’s a fundraiser for DM so we were super excited to be able to give them a head start into 2016.”