The Daily Northwestern • May 8, 2015 • https://dailynorthwestern.com/2015/05/08/city/atlantic-contributor-speaks-on-human-rights-violations-american-jewish-role-in-israeli-policy/ 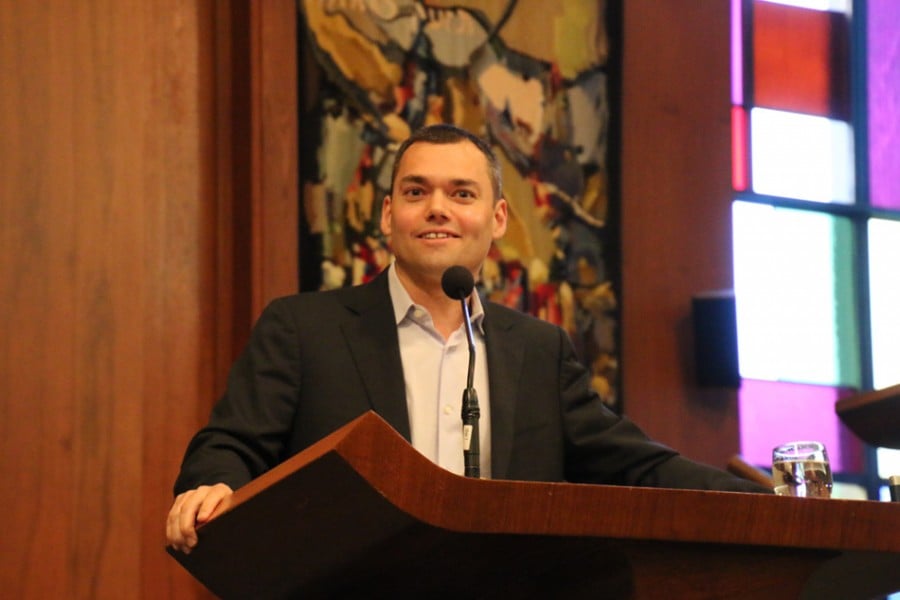 Peter Beinart spoke to a crowd of about 100 at the Beth Emet synagogue Thursday evening. He primarily discussed the role of American Jews in the future of the Israeli-Palestinian conflict.

Peter Beinart, a contributing editor at The Atlantic, called on American Jews on Thursday to take an active role in defining Israel’s future as a Jewish democratic state.

American Jews influence the direction Israel will take in its treatment of Palestinians and are obligated to ensure the Israeli government does not violate democratic ideals, Beinart said in a lecture at the Beth Emet Synagogue, 1224 Dempster St.

Beinart highlighted several areas in which he thinks the Israeli government violates the rights of its Palestinian citizens. His main focus, however, was on settlements in the West Bank. Beinart, a prominent voice in the liberal Zionist community, said settlements endanger the future of a Palestinian state, as well the future of Israel itself.

“Zionism, at its core, is about giving Jews the power to control their own destiny,” Beinart said. “Settlement growth threatens the core of the Zionist movement because it takes that power out of Jewish hands.”

Beinart said he believes in the importance of a Jewish state, but also that we must criticize violations of human rights that threaten Israel’s existence as both a Jewish and democratic state.

Settlements in the West Bank are subsidized by the Israeli government and have been called illegal under international law.

Beinart also said the recent elections in the Israeli parliament, the Knesset, created a coalition government likely to further erode democratic practices in Israel, such as free speech on campuses and the rights of Arab-Israelis.

“This is a government that may act to erode the democratic character of the state,” Beinart said. “This is not a government that will allow (Israeli Prime Minister Benjamin) Netanyahu to negotiate for a two-state solution.”

Beinart questioned the silence of American Jewish leaders, criticizing claims that American leaders do not have a place in discussing Israeli politics and government because they are not in Israel. However, American leaders frequently criticize Palestinian actions in Israel, as well as political attitudes toward Israel in Europe, he said.

“When American Jews are willing to speak up and say, ‘We have a profound problem with what you are doing,’ the Israeli government will listen,” Beinart said.

Rabbi Andrea London, who organized the event for Beth Emet, said Beinart is an important voice in the debate over Israel and she was glad he spoke to her congregation. London said Beinart is challenging the increasingly negative perception of Zionism.

“(Beinart) is providing the best challenge to groups who use (Netanyahu) to attack Zionism and the two-state solution,” London said. “He really is the biggest problem for these groups because he is showing an alternative to the status quo.”

This was the second time Iszy Licht, a Weinberg senior, has heard Beinart speak on the problems Zionism faces. Licht belongs to the Northwestern chapter of J Street U, an organization that bills itself as a liberal “pro-Israel, pro-peace” advocacy group, and first heard Beinart when he spoke at the J Street national conference in D.C. this March.

Licht said that the human rights violations in Israel cannot continue, but he supports a Jewish state. He also agreed with Beinart that there is hope for Israel’s future.

“Knowing that there are other people like me, people who hold what I hold dear gives me hope for a Jewish state that respects the rights and dignity of all people,” Licht said.