The Daily Northwestern • May 7, 2015 • https://dailynorthwestern.com/2015/05/07/sports/softball-wildcats-focus-on-fundamentals-heading-into-big-ten-tournament/ 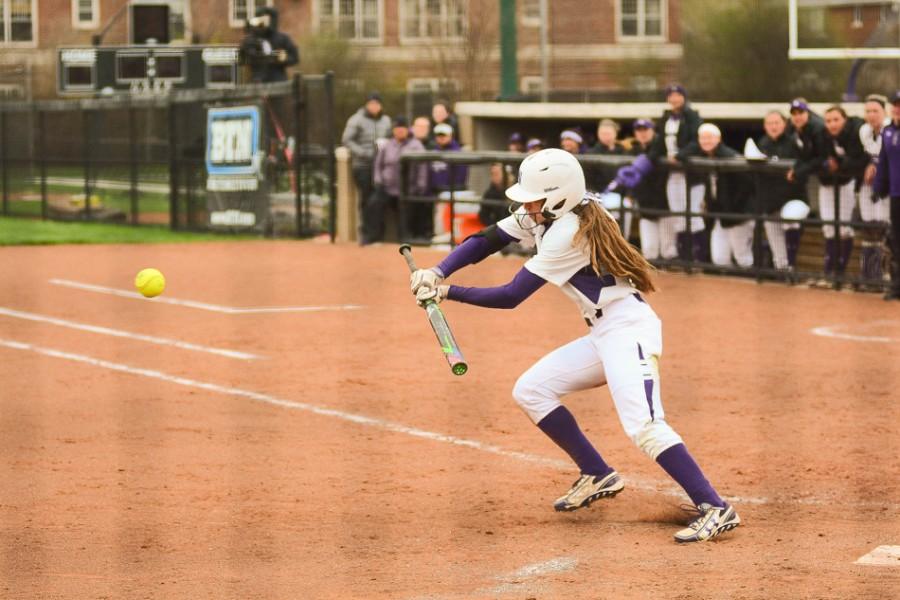 Centerfielder Sabrina Rabin slaps the ball. The Big Ten Freshman of the Year will be a key part of Northwestern’s lineup when it opens up Big Ten Tournament play Friday against Purdue.

In a conference dominated by softball powerhouse Michigan, Northwestern softball will head to Columbus this weekend with one goal: Play spoiler and win the Big Ten Tournament.

But to achieve that goal, the Wildcats (27-20, 14-8 Big Ten) must remain consistent and composed as they face opponents from what is becoming one of the toughest softball conferences in the country.

The Cats’ first game of the tournament will take place Friday against 12th-seeded Purdue and its ace pitcher Lilly Fecho. Earlier this season, NU swept Purdue in a bullpen battle that pitted Fecho against juniors Kristen Wood and Amy Letourneau. Wood, who has been stellar for the Cats this season, enters Friday’s game with a 15-9 record and a 4.26 ERA.

Regardless of Wood’s success against Purdue earlier in the season, there’s one thing NU coach Kate Drohan wants her team to remember this weekend: They need to take things one pitch at a time, both offensively and defensively.

“What I’ve seen out of our hitters, not only have they made great adjustments at bat to at bat, but pitch to pitch,” Drohan said. “If we can continue to focus on our adjustments, I think we’ll be a fun team to watch.”

Centerfielder Sabrina Rabin, who was named Big Ten Freshman of the Year on Wednesday, echoed her coach’s sentiments.

“It’s really about playing how we know how to play and taking each pitch one at a time,” she said.

Rabin has been a crucial part of the Cats’ offensive production this season, finishing the regular season hitting .411 with 49 runs scored, 67 hits and 27 stolen bases from the leadoff position. Drohan noted that Rabin has exceeded expectations as a freshman with the best offense she’s ever coached at NU.

“Sabrina has been outstanding for us as our table setter for our offense,” Drohan said. “We’ve seen a lot of different defensive sets against her because she’s got a great combination of speed and she can also drive the ball.”

Rabin came into her freshman season with high expectations for herself, but she has surpassed even her own goals.

“I definitely have high goals for myself, but I just wanted to contribute to the team,” Rabin said. “It’s all paying off, especially with the hard work I put in the fall.”

The question is if those pieces will come together this weekend in Columbus against perennially powerful Big Ten opponents. Drohan has faith NU will capitalize on its strengths and bring home the crown.

“Regardless of who you play in this tournament, you have to play your best,” she said. “We’ll show up at 12 o’clock on Friday and we’ll be ready to go.”