The Daily Northwestern • May 7, 2015 • https://dailynorthwestern.com/2015/05/07/campus/northwestern-community-celebrates-20th-anniversary-of-hunger-strike/ 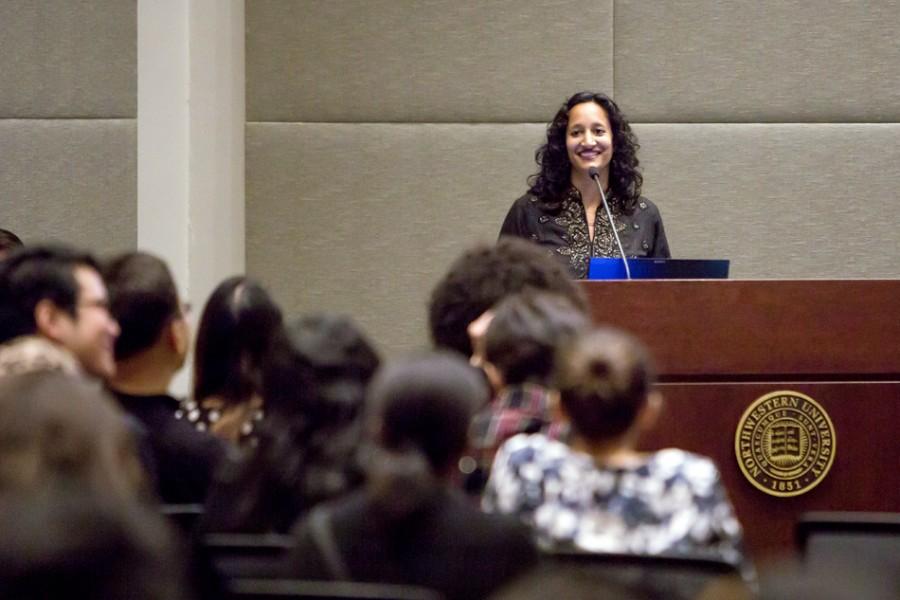 Sumun L. Pendakur (Weinberg ‘98) speaks during the celebration of the 20th anniversary of the student hunger strike that led to the creation of Northwestern’s Asian American Studies Program. Pendakur, who participated in the strike as a freshman at NU, said her activism as a student influenced her life and career.

Northwestern community members gathered Wednesday night to celebrate the 20th anniversary of the 1995 student hunger strikes that led to the formation of the Asian American Studies Program at Northwestern.

In front of a packed audience in Hardin Hall on Wednesday night, sociology prof. Aldon Morris was among various NU community members who spoke at the event and called for the creation of an Asian American Studies major. The AASP faculty plan to submit a proposal for the major by the end of the calendar year.

Sumun Pendakur (Weinberg ’98), who participated in the hunger strike as a freshman, spoke about her role in the Asian American Advisory Board, the movement that pushed for the creation of the AASP.

Pendakur said she participated in the hunger strike for three days and helped plan and execute the movement. She said although the strike ultimately led to the formation of the program, it took the NU administration four years to officially establish it.

“The strike led to a lot of sympathy and public outcry nationally and internationally,” she said. “But, at the same time, at the end of those 23 days, we had no new promises from the administration. We had nothing in writing that would say that anything was ever going to happen.”

She said she continued fighting for the creation of the program throughout her time at Northwestern, rising to the chair of AAAB.

Now the associate dean for institutional diversity at Harvey Mudd College, Pendakur said being involved in the movement influenced her life and career even after leaving NU.

“You just never know what you’ve done as a freshman, how it is going to come back to impact the rest of your life,” she said. “Being involved in this struggle and movement and all the organizing … shaped the next 20 years.”

Weinberg senior Tiffany Chang, one of the event organizers, said although she feels a lot of Asian-American students’ drive for activism on campus has diminished, she hopes this event, along with the activism that has emerged on campus this year, can help inspire students who haven’t spoken out to do so.

“I’m graduating next year, so I won’t directly be on this campus to fight, but I will be in touch with the program and any way I can help I will,” she told The Daily.

She said Pendakur’s story shows student activists can continue their work and even make a career out of their activism after graduation.

“She has opened my eyes, and I hope she opens the eyes of others in realizing that activism isn’t a dead-end path,” Chang said. “if you continue to pursue it and continue to grow your knowledge and your basis, you can really establish yourself in the field of activism.”

Morris, the first AASP director, said the program has become an important part of NU.

“It would be shortsighted to assume Asian American Studies has always enjoyed an institutional presence at Northwestern,” Morris said. “It would also be a mistake to believe Northwestern’s leaders welcomed the creation of the (program) and were willing to provide the necessary resources for it to take room and to grow.”

He emphasized the importance of social movements, such as protests, that give a voice to the powerless and allow them to create change.

Morris said the students, by putting “their very lives on the line” in pursuit of the AASP, threatened NU’s reputation as a “forward-looking and enlightening” university. The negative attention drawn to the University prompted administrators to listen to the students’ demands.

“There remain challenges the program and University leaders must address,” Morris said. “Northwestern administrators should seriously consider creating a major in Asian-American studies, even if the enrollment is (lower) than other programs. … In this case, intellectual need rather than numbers should drag the decision regarding the major.”

History Prof. Ji-Yeon Yuh told The Daily that she and Asian American Studies Prof. Jinah Kim drafted a proposal for the major a few years ago, but decided to hold off on submitting it because they were told it wasn’t going to be approved.

“We’ve had a succession of students come to us to help prepare proposals for ad hoc majors in Asian American Studies,” she told The Daily. “I feel like its important for all the ethnic studies fields to be present on campus in a really strong and vibrant way.”

The event was hosted by the AASP, the Office of the President, the Office of the Provost and the Weinberg College of Arts and Sciences. It featured not only speeches by key figures of the movement to create AASP, but also performances from students, including a capella group Treblemakers, hip-hop dance crew Refresh and Still Hungry, a spoken word performance by three students.