The Daily Northwestern • May 6, 2015 • https://dailynorthwestern.com/2015/05/06/sports/baseball-northwestern-collapses-in-final-game-of-series-against-kansas/

Baseball: Northwestern collapses in final game of series against Kansas 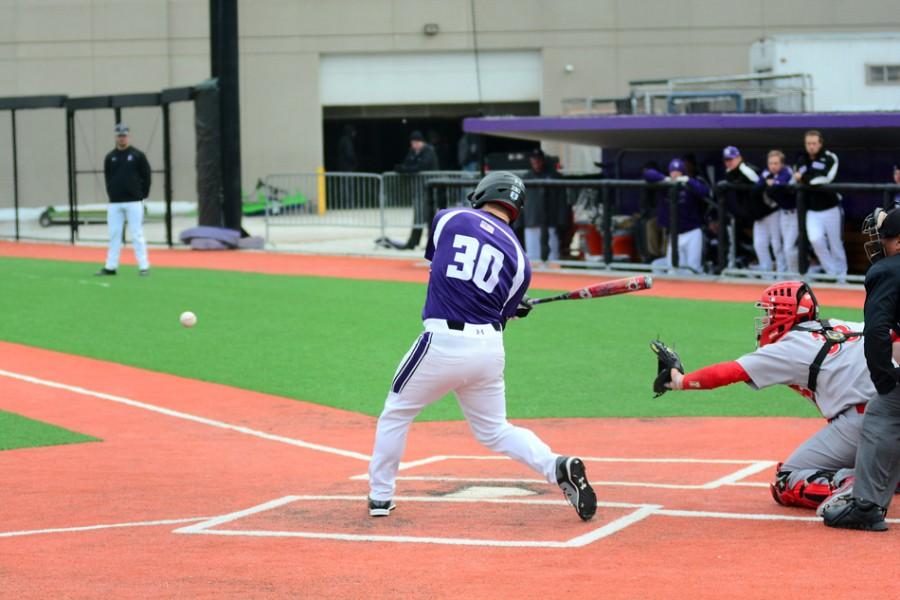 Joe Hoscheit swings at an incoming pitch. The sophomore made an appearance on the mound late in the game Wednesday but failed to close out the contest for Northwestern.

In a season filled with far more losses than wins, Northwestern entered a two-game series with Kansas (22-28, 7-11 Big 12) looking to build some momentum entering the final stretch of its Big Ten slate.

After leaving nine men on base in a 6-2 loss Tuesday, the Wildcats (15-33, 5-13 Big Ten) led 6-4 Wednesday entering the ninth inning. The Cats were swinging the bats well, playing error-free in the field and keeping the dugout loose with constant chatter.

Then the wheels fell off.

NU brought a run across the plate in the bottom of the ninth, but didn’t rally for more. Junior second baseman Antonio Freschet grounded into a game-ending fielder’s choice as the Cats sulked off the field with a 10-7 defeat.

“(Hoscheit) gave it everything he could,” senior catcher Scott Heelan said. “There’s really nothing more to say. We’ve just got to be ready to bounce back this weekend.”

Though the veteran Heelan said the loss was disappointing, he found plenty of positives, particularly in NU’s offensive performance.

The Cats teed off for 13 hits, including home runs by Heelan and senior Luke Dauch. Although they left 10 men on base, Heelan said he thought the team’s situational hitting was better.

“We swung the bats really well as a team today,” the catcher said. “Everyone feeds off each other really well.”

Heelan had four hits in five at bats, and sophomore center fielder RJ Watters continued his hot stretch with a pair of hits.

Watters, who is filling in for injured star senior Kyle Ruchim, sliced a go-ahead, 2-run single to right field in the seventh inning. The sophomore is now hitting .375 this season.

“Obviously you can never replace a player like Kyle Ruchim,” Heelan said. “What RJ has been able to do just shows kind of his work ethic and his positive attitude. He’s always one of the first guys in, last guys to leave. He works every day.”

NU returns to Big Ten play this weekend with a three-game series at Michigan. The Cats possess little room for error, as they trail eighth-place Nebraska by three games for the final spot in the conference tournament with six games remaining.

“Big series ahead, we’ve got a lot of pride to play for,” Heelan said. “We’ve got each other, the coaches, our families, ourselves. So it will be a fun weekend.”