The Daily Northwestern • May 5, 2015 • https://dailynorthwestern.com/2015/05/05/sports/womens-tennis-wildcats-prepare-for-ncaa-tournament-opener-out-west/ 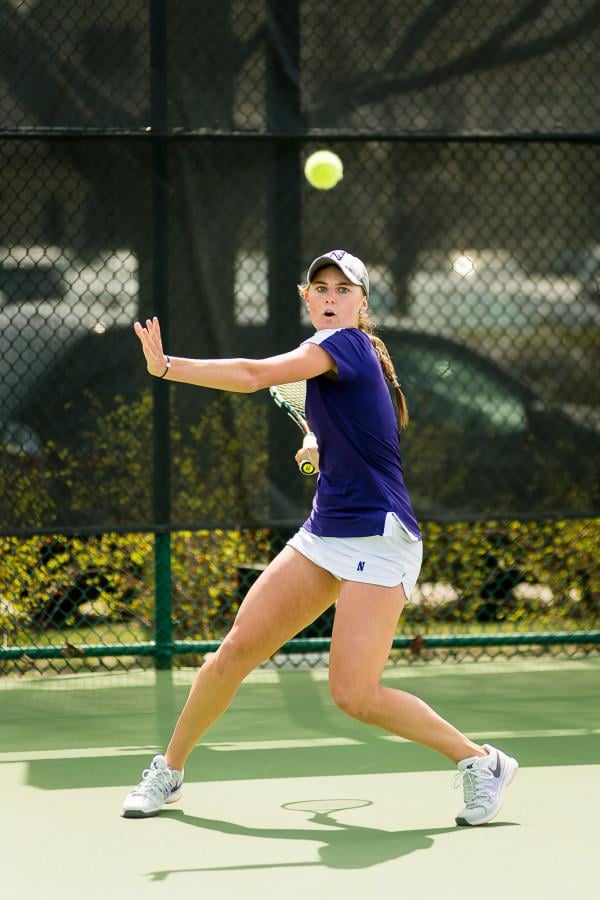 Brooke Rischbieth sets up for a big return. Playing at No. 6 singles, the sophomore will be critical for Northwestern in a close match.

Just as it’s warming up in Evanston, the Wildcats are taking a trip to California.

No. 26 Northwestern faces No. 37 St. Mary’s (California) this Friday in Los Angeles in the first round of the NCAA Tournament. The winner takes on the victor of Idaho and host school No. 7 UCLA in round two.

“We were all excited to go to the West Coast,” freshman Erin Larner said. “We’ll see a fresh perspective seeing new teams.”

The Cats are ready for new blood after losing their second Big Ten Tournament in 17 years last weekend — the first time since 1999 they didn’t win either the conference tournament or regular season.

Still, this marks the 17th-straight year the team qualified for the NCAA Tournament.

After its semifinals loss to Ohio State in the Big Ten Tournament, NU watched video footage of the match and each player has worked to fix individual mistakes.

“The video was very helpful for the girls to see,” coach Claire Pollard said. “The things that we needed to fix were very apparent. You can’t hide from it when it’s facing you right there.”

And overall, the Cats have handled the defeat well.

“We’re over it,” Pollard said, “Deep down, the girls know that they’ve done a great job representing Northwestern. They know they’ve put in their work. Sometimes it just doesn’t always go your way.”

All season long, things never seemed to click for NU. The Cats dealt with injuries and struggled for much of the early season with luck never seeming to go their way.

“Although we’re disappointed and wish we could go back and do a couple of things differently,” junior Alicia Barnett said, “I don’t know whether that would have changed anything. We did all we could, but they were better than us on that day. Next time we play them, we’ll get revenge.”

NU has gotten good news since the loss, though. Barnett and Larner were selected to the All-Big Ten team and Larner was named the conference’s Freshman of the Year.

Barnett, who moved up from playing No. 3 to No. 1 singles, said she didn’t expect to make the team after a 6-5 conference record but was grateful for the honor.

“It’s tough playing No. 1,” Pollard said. “There’s no break. I was really pleased (Barnett) got rewarded. With Erin, I’m thrilled we have a Big Ten Player of the Year. In a difficult season, it speaks volumes.”

“They’re an outdoor team and they’re playing pretty close to home,” she said, “so it’s important that we play our best match of the year so far.”

Larner, meanwhile, said she’s played a few of the girls before from growing up on the West Coast.

But for most of the team, Los Angeles is a new setting. Sophomore Manon Peri is from the City of Angels, but she’s missed the entire spring season with an injury.

Still, Peri will lead the Cats off the court, Barnett and Larner said, planning activities for the team in her home city.

But on the court, the weather will definitely be a change of pace. The team plays most of its season indoors.

“Even when we play outdoors, it can be freezing cold,” Barnett said. “Playing tennis outside in the warmth is so different from playing indoors.”

The winner will likely take on UCLA, the reigning NCAA Champion. If NU advances, it will head to Baylor for the final three rounds from May 14-19.

But for the time being, the Cats are just taking it one match at a time. They’re ready to prove what they’re made of.

“It’s been a year full of disappointments, but now we’re just trying to be a better team,” Pollard said. “We’ve got one more chance to play our best tennis of the year and hopefully be a better version of what we’ve been.”

“Plus we get to ship out to California,” she added, “so it’s pretty exciting.”