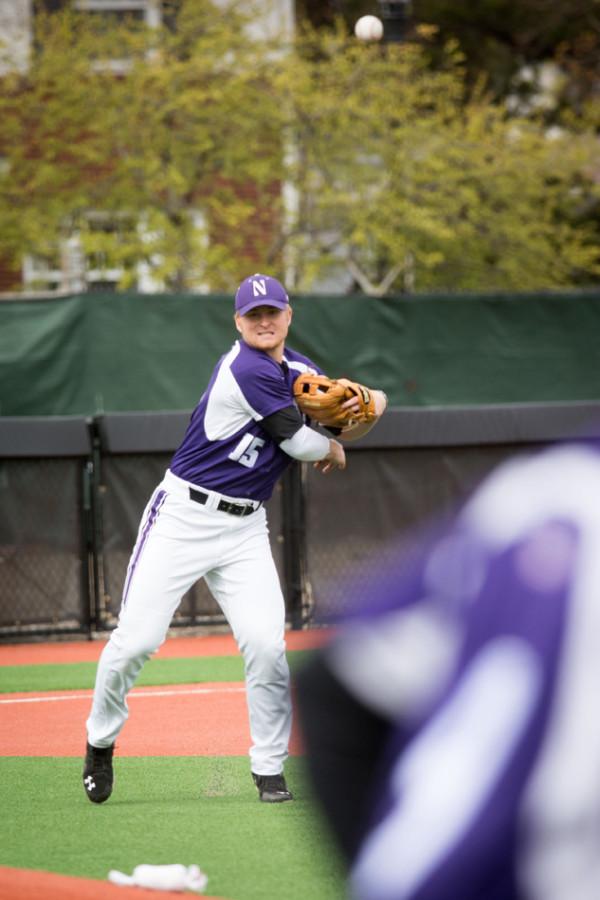 Zach Jones lost out on his day’s rest, but all ended well for the junior first baseman Wednesday.

Jones was called upon in the bottom of the 10th inning with Northwestern and Chicago State tied, and the game-winning run on third base. The lefty poked a 2-2 pitch into left field, scoring senior Luke Dauch for a 5-4, walk-off victory at Rocky Miller Park.

“I was just looking to hit the ball hard somewhere,” Jones said. “I put a good swing on it, and it worked out.”

With the win, the Cats have defeated Chicago State 13 straight times dating back to 2002.

NU (14-29, 4-11 Big Ten) earned its opportunity in extra innings thanks to a stellar relief performance from junior Jake Stolley, who picked up his second win of the season.

The left-hander cleaned up freshman Tommy Bordignon’s bases loaded mess in the eighth inning to preserve a 4-4 tie. After working in and out of trouble in a scoreless ninth, he set Chicago State (11-32-1, 4-12-1 WAC) down 1-2-3 in the 10th.

“Stolley’s been solid for us all year,” coach Paul Stevens said. “You talk about Iron Mike on the hill, that’s him.”

Sophomore Joe Hoscheit began NU’s 10th-inning rally with a stand-up double to deep left field. Dauch pinch ran for Hoscheit and, following a walk and sacrifice bunt, the Wildcats had men on second and third base with one out.

Despite facing a two-strike count, sophomore RJ Watters laid down a perfect bunt to advance the runners.

“When people are charging that hard, you don’t even know how difficult it is,” Stevens said. “I thought he did an unbelievable job, and I told him that.”

Dauch stayed put at third, but junior Antonio Freschet took off from second. Freschet beat the throw back to the second, but his frenzied slide carried him past the bag, where he was tagged out.

With two outs, the Cougars opted to pitch to Jones, who had the benefit of 2-0 count.

“That’s definitely new to me, starting off with two intentional walk pitches,” Jones said. “Once (Freschet) got picked off, I knew they’d probably pitch to me.”

Kostalek worked the count back to 2-2, but Jones needed to make contact just once to start the celebration.

“I guess nine innings (of rest) was enough,” Stevens said of Jones. “He just decided to fly in and save the day.”

That time, junior Jack Mitchell was the pinch-hit hero, sending a game-winning single to left field to cap a ninth-inning rally.

“(The Cougars) are probably starting to get a little frustrated with the way things are going, but it’s been working out for us,” Jones said of the dramatic finishes. “It’s always fun winning walk off.”