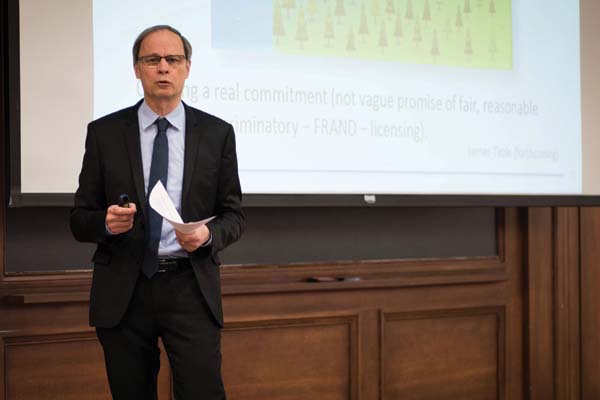 Markets are often not as simple as one buyer and one seller, he said, and regulators need to be careful or they may impose sanctions over “justified” market advantages often earned by research investment. Government policy needs a mix of unbiased academic insights and applied professional experience, he told The Daily after the event.

Tirole also won the Erwin Plein Nemmers Prize in Economics last year — a $200,000 stipend awarded every two years by Northwestern — and was in Evanston for academic commitments associated with the prize. Seven out of the 11 Nemmers winners, a prize you can’t win after a Nobel, have gone on to become Nobel laureates.

The Undergraduate Economics Society, which hosted the event, said the opportunity to host a winner of the Nobel Prize in economics while he was visiting from France was too great to pass up.

Tirole spoke about “two-sided platforms” — such as credit cards — which serve as a medium for transactions between two parties. He said regulations in these complex markets often hurt more than they help.

“Price coherence” requires that these transactions cost the same with or without the medium. Usually, buying without the platform — like with cash instead of credit card — allows for a lower price, but following coherence hurts consumers, he said, by forcing the discounted price to rise toward the full price.

He also discussed multi-company “bundles” – modernly seen through technology patent pools – which he said can limit competition. Prices will only stay down, he said, if companies can sell their contribution outside of their pools or bundles. Policy will work best when the price of each part of the bundle is clear and regulators fully understand the industry, he said.

Tirole emphasized his success was made possible by his colleagues and by economists who came before him. There are many issues, like net neutrality, that are far from decided, he said, and he expressed hope they will be solved by economists who will come after him.