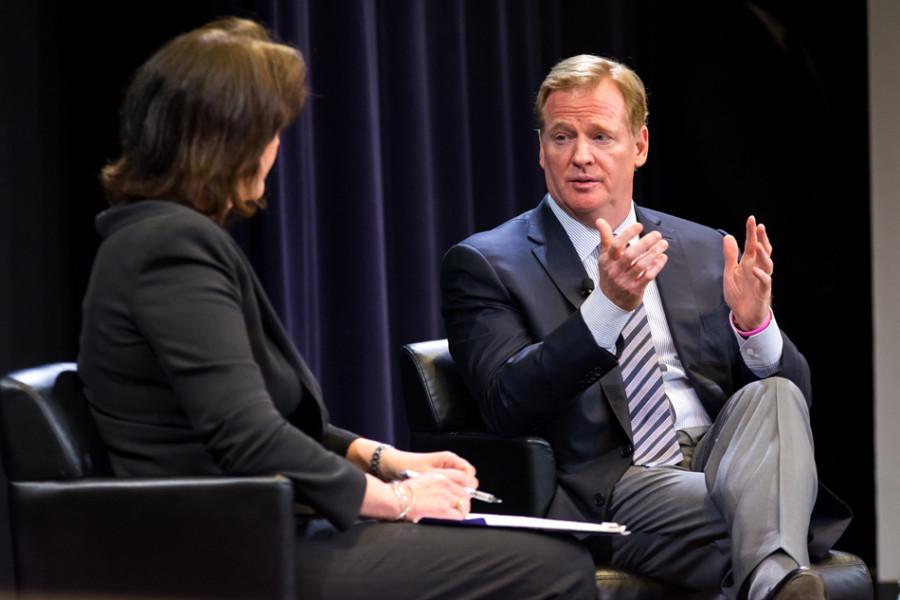 NFL Commissioner Roger Goodell answers a question from Medill alumna Christine Brennan at Northwestern on Wednesday evening. Goodell, who is in Chicago for the NFL draft, fielded questions from students on topics ranging from the NFL’s role in fighting sexual assault to plans to grow the game domestically and abroad.

“It’s fitting in our stature as arguably the best journalism school in the world,” Schapiro told The Daily. “You’d expect nothing less.”

The Q&A with Goodell, who is in Chicago for the NFL draft, was closed to the general public but was attended by a limited number of Medill students and guests of Schapiro, who hosted a dinner with Goodell at his home after the event. The draft, which will be held at the Auditorium Theatre in Chicago, runs Thursday through Saturday.

Goodell told the audience he wanted to speak with Medill students because of the important role the media plays in the NFL.

“I enjoy the opportunity to have these kinds of exchanges. … It was something we thought would be a great opportunity for us to be able to share our perspective,” he said. “Journalism is very important to our business. We want the facts out there.”

Brennan told The Daily before the event that the NFL reached out to her asking to schedule an interview at Medill. She said beyond that she left the event planning to Medill and the NFL.

Brennan opened the event with questions about Ray Rice, the former Baltimore Ravens running back who punched his fiancee, knocking her unconscious, in February 2014.

Goodell said the league has taken steps to educate all NFL employees about domestic violence. He spoke about personally visiting four shelters for victims of domestic violence in the past few months and educating himself on the issue.

At the end of last year, the NFL adopted a new personal conduct policy that regulates players’ off-field conduct, including instances of domestic violence. Goodell said the new policy allows the NFL to punish players beyond the penalties determined by the legal system.

Goodell said the NFL’s new policy is one of the most progressive.

In response to questions from Medill students and Brennan, Goodell said he doesn’t consider the Washington NFL team’s name to be a racial slur.

“It’s the name of a football team,” he said. “I grew up as a Washington Redskins fan. I always looked at that as something we were proud of. In that context, it’s not being used as a racial slur.”

Medill junior Samantha Sterling, who worked as a public relations intern for the team this summer, said she was surprised by Goodell’s comments.

“As someone that worked for the organization, I do understand how they value the tradition of the name,” she said.  “It was interesting to see his candid perspective rather than a formulated answer.”

Goodell declined to give his opinion on NU football players’ attempt to form a union, but said the NCAA should evaluate the challenges college athletes face.

“There’s nothing worse than somebody who doesn’t understand all the issues passing judgment, so I’m not going to do that,” he said.