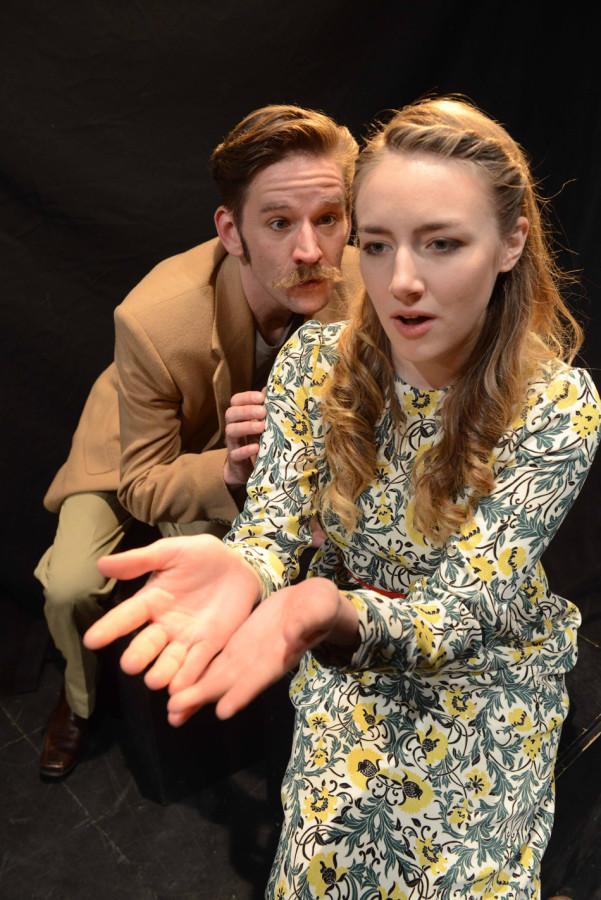 Ryan Lanning (Lorenzo) and Stephanie Stockstill (Tilly) perform in “Melancholy Play: a chamber musical.” The show, which was originally a play, has been adapted to include musical components.

This weekend, Evanston’s Piven Theatre Workshop will premiere “Melancholy Play: a chamber musical.” Written by Tony-nominated playwright Sarah Ruhl and directed by Evanston native Polly Noonan, the play tells the lighthearted story of a woman’s melancholy. A bank teller, Tilly’s extreme sadness turns sexy when every stranger she meets falls in love with her.

The production will run April 30 through June 7 at 927 Noyes St., with the official press opening on May 2.

Noonan starred in the show herself over a decade ago and has returned to develop “Melancholy Play” as a new chamber musical with five actors and five musicians. She described the story as improvisational, eccentric and full of poetry and humor.

“It’s about something quite concrete but in a hilarious way,” Noonan said. “It asks questions about the nature of our emotional lives, because it’s about one woman who is so melancholy and so in depression that she’s so alive in her emotional life that person after person falls in love with her.”

Noonan described her experience starring as Tilly in 2002 as a culture shock that broke her acting hiatus and challenged her.

“A play appears very simple on the page, but in order for it to come up, it demands a great deal from the actor,” she said. “It demands that you be in transformation and alive and connected to your emotions every step of the game.”

Noonan said she decided to direct “Melancholy Play” because she’s always been curious about directing. She said she saw a production of the show in New York was “beguiled” by the music.

“It made me think it would be a wonderful idea to produce it at (Piven Theatre Workshop),” she said.

Actor Ryan Lanning, who studied vocal performance at the University of Michigan, plays Lorenzo, Tilly’s therapist, in the show. He described his time at Piven as a new experience because the show, originally a play, has been adapted to include a major musical component.

“It’s the moments that are set to music that enhance the atmosphere of the play and really deepen the feeling,” Lanning said. “Sometimes you feel emotion so strongly that spoken word just doesn’t do it, so you have to sing it.”

Lanning said working with Noonan has been encouraging for him as an actor. He said she veers away from mechanical, step-by-step direction and chooses to make her direction collaborative.

“She lets us show what we are feeling,” he said. “She takes what we give and creates the ultimate finished product by expressing ideas that inspire you to move in a certain direction.”

Ruhl teamed up with composer Todd Almond to feature a string quartet and pianist to complement the play.

Noonan said the experience working as director is wildly different because of the addition of music director Aaron Benham.

“It’s a very different world,” she said. “The music is really challenging and quite beautiful. It’s exquisite. He has made it appear effortless.”

Noonan said the prospect of working within the city’s vibrant art community is an added bonus.

“My friends and I like to say there was something in the water in Evanston during the 70s because there were so many creative people growing up,” she said. “Evanston has been the wellspring through which all good things have come into my life.”

She said the production represents a chance to revisit a past chapter in her life.

“It’s a pleasure to remember your earlier life, your earlier self,” she said. “It was a good collaboration those many years ago. And I’m happy to be immersed in it again.”