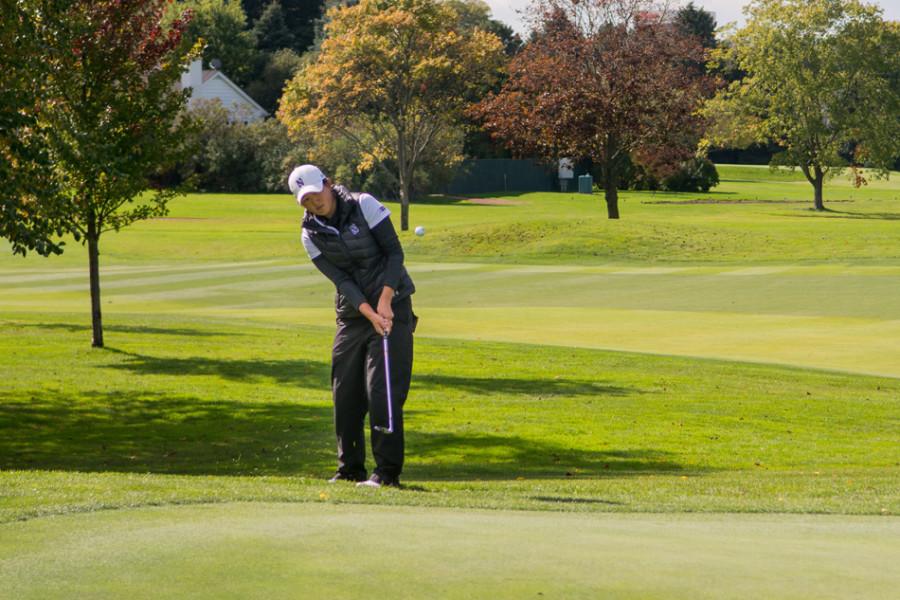 Kaitlin Park chips onto the green. The junior shot a team-best 70 in the opening round of the Big Ten Championships.

Heading into the final round of Big Ten Championships 6 shots behind, the Wildcats took on a fighting spirit and it paid massive dividends.

NU captured its second Big Ten title in three seasons Sunday, slowly gnawing at the deficit to Ohio State and erasing it entirely by the end, as the No. 15 Cats and the No. 40 Buckeyes were crowned co-champions at The Fort Golf Resort in Indianapolis.

The sharing didn’t extend to individual honors. Freshman Sarah Cho produced a 3-under total in Indianapolis for the individual title, piecing together nine birdies over the final 36 holes to win by 1 shot.

Although Cho had the credentials for the victory as the No. 4 recruit of the 2014 class, the newcomer was left on the bench for team competition the entire fall and had lackluster showings of tied-for-53rd and tied-for-39th and zero subpar rounds in her two previous spring starts.

She even admitted in the aftermath she didn’t see this performance coming. Still, it appeared her slow immersion into the lineup held a large role in her performance this week.

“For the whole year, it was a motivating factor to get my game down and figure it all out,” Cho said. “My coaches and teammates were supportive of me throughout the year, even though I was struggling. This performance was kind of unexpected but definitely something I was really working hard to get.”

As for the team title, that was a pretty sweet deal, too.

“It was one of the best days of my life,” junior Suchaya Tangkamolprasert said. “We love each other so much, so to have another victory with these people is a great feeling.”

The No. 15 Cats entered the field as the highest-ranked squad, and were naturally the favorites to win, but the triumph was satisfying for several reasons.

NU already had two victories on the year coming in, but had produced less-than-inspiring performances in its previous two events. The Cats failed to win Big Tens from the same top-ranked position last year.

The Cats learned from their 2014 mistakes and jumped out fast Friday, sitting in second place and 3 back after 18 holes. Stormier, windier conditions in Saturday’s second round didn’t seem to bother NU much as the team remained in virtually the same position before a rain delay halted actions for two hours in the afternoon.

Coming out of the break, though, NU dropped shots in a hurry and fell 6 behind and into third place.

“We really gave away 3 to 4 shots on the par-3 17th,” coach Emily Fletcher said. “The tee was up, the hole was playing shorter and we just made so many bogeys coming in on that hole.”

The Cats actually counted themselves lucky to be just 6 shots behind with one round to go as Fletcher noted the team had been sloppy with silly three-putts and bogeys on par-5s over the first 36 holes.

The coach challenged her team Saturday night to step up and have all six starters ready to make noise early the next day. Apparently, her players were already prepared.

“All along, Saturday night and Sunday morning, our mindset was that we should be more aggressive because we’re not the leaders,” Tangkamolprasert said. “So we were actually really pumped up going into today, and we just encouraged each other to go for it and score.”

The Cats did come out firing, with four players shooting par or better on the opening nine holes. By the back nine, NU had caught and surpassed the Buckeyes for the lead.

The fast start was precipitated by that well of energy the team was waiting to unleash.

“I knew right from the beginning, our kids brought an energy and intensity Sunday morning that was palpable,” Fletcher said. “The intensity and determination they had, when they hit a poor shot and then a decent pitch, they willed themselves to make the putt. They were like bulldogs out there, and they weren’t going to let go of this.”

The fighting spirit remained throughout the day as a small cadre of Cats fans cheered on the squad. Sophomore Kacie Komoto parlayed three early birdies into a 2-under 70 that left her in a tie for 16th, Tangkamolprasert shot 71 to tie for ninth with freshman Hannah Kim, who threw away her recent struggles and fired a final-round 72.

Junior Kaitlin Park and senior Hana Lee, the veterans of the squad, finished tied for 25th and didn’t have counting scores on the final day, but Fletcher noted that their late birdies proved a key positive visual to keep the others motivated.

Cho bogeyed her last two holes but it was still enough for the win. Her surprising performance was keyed in by her putter. She also had assistant coach Beth Miller walking with her the entire round and most of the first two days. Fletcher said her colleague was instrumental in Cho’s course management and keeping the freshman the right mix of relaxed and focused.

The Cats will next compete at the NCAA Raleigh Regional, where the team is the No. 4 seed. The top six finishers there advance to NCAA Championships. Ahead of heightened competition, it’s a good thing NU has found its footings.

“It was that little spark that we had been missing,” Fletcher said. “We talked about it after the round, and the girls said the energy was different Sunday morning, and that is what we have to bring. This will give us a nice little shot of adrenaline.”