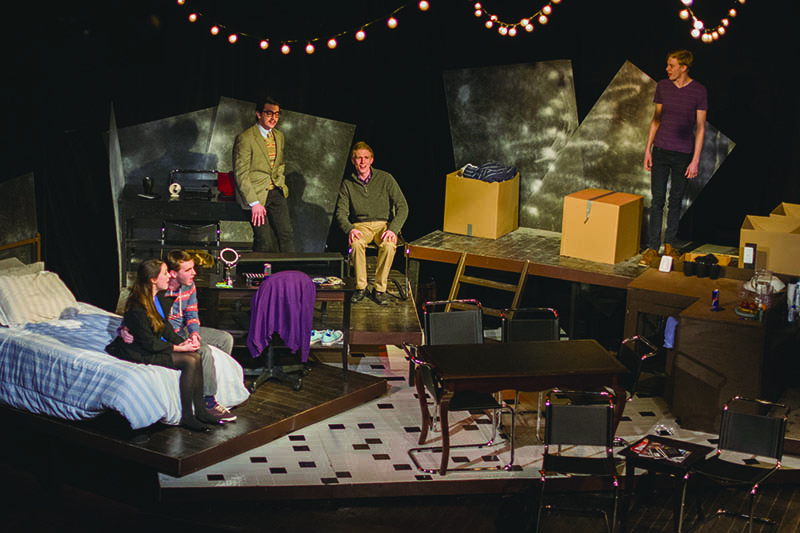 The cast of “Next to Normal” performs in the Louis Room in winter 2014. The Student Theatre Coalition will have fewer performance slots in Norris University Center next year.

The Northwestern Student Theatre Coalition will again receive fewer performance spaces at Norris University Center next year. The number of spaces has been decreasing since 2013.

For the 2015-2016 academic year, StuCo will receive eight week-long Norris reservations. Five reservations are for McCormick Auditorium and three are for the Louis Room. This year, the group had 11 reservations and 14 the year before, said StuCo co-chair A.J. Roy, a Communication senior.

Roy said the 10 different theater and dance groups that make up StuCo each have different space requirements and Norris is often the ideal space for performances. He said McCormick Auditorium is the only space that can support both the set and the size of the audience for shows such as Mee-Ow.

Next year will be the first time Mee-Ow will have both its shows in Shanley Pavilion, said StuCo co-chair Olivia Probetts, a Communication senior. In the past, the group has held one show in McCormick and one in Shanley.

“Our options are a little limited as to where our alternate spaces are, and even this year, we filled Shanley to the brim with StuCo shows.” Roy said. “It is difficult to continue to move shows to Shanley.”

The fewer Norris spaces allocated for StuCo are due to the increase in other groups requesting Norris space, said Amy White, director of Norris event management.

White said Norris has increased its transparency in reserving space, inviting anyone who needed space to apply for it. In the past, the reservation process was often dominated by the same student groups that held events in Norris each year. Since the application process has become more public, the number of organizations requesting the space has tripled, she said.

“It’s important to understand that we are trying to accommodate particular groups’ needs in context with the whole community,” said Kelly Schaefer, Norris executive director. “So when we are a whole community, how do we make sure that we’re balanced … because we want to make sure that everyone can come in and have space at Norris.”

White said Norris does not have the facilities to accommodate all of StuCo’s needs demonstrated over the past few years.

“It’s a shame when people are limited to only designing, directing or working in such a small, confined space, and there won’t be opportunity to use the bigger spaces that Norris provides,” Probetts said.