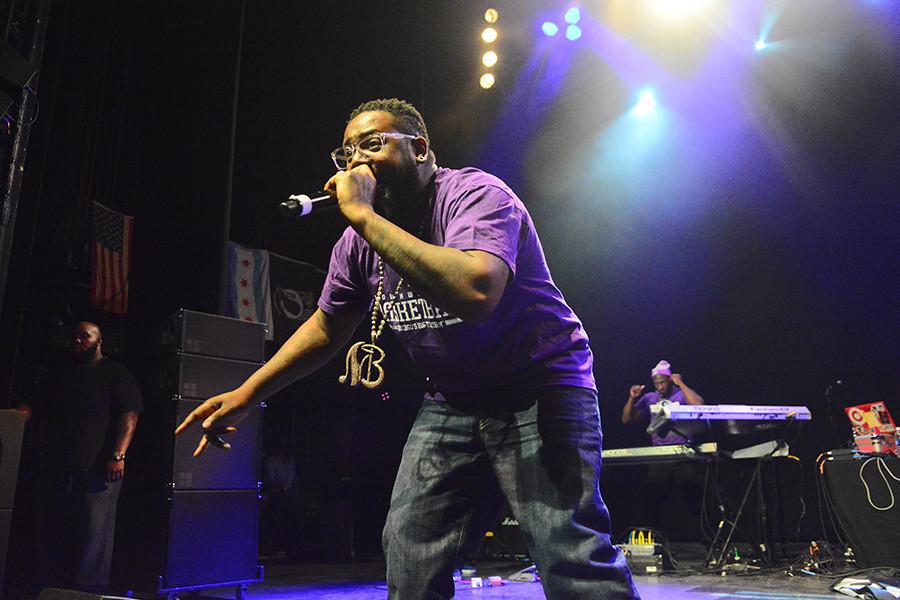 Wearing Northwestern apparel, T-Pain performs at A&O Ball on Friday in front of a full crowd. T-Pain headlined the concert with British electronic group AlunaGeorge opening the event at the Riviera Theatre.

Throwbacks and new remixes energized the Riviera Theatre on Friday night as T-Pain and AlunaGeorge performed at A&O Ball.

Rapper T-Pain headlined this year’s concert with AlunaGeorge, a British electronic pop group, who opened the evening by performing songs off of its first studio album, “Body Music.”

Under blue spotlights and clad in a Northwestern basketball T-shirt, T-Pain came out on stage singing “Cyclone.” Throughout his set, T-Pain mixed some of his well-known songs, such as “Bartender” and “Low,” with works from other artists.

His covers included “Black and Yellow” by Wiz Khalifa, “Make It Rain” by Travis Porter and even “Royals” by Lorde, which he customized the lyrics and sang without Auto-Tune.

T-Pain and his ensemble danced across the stage and encouraged the crowd to wave their hands, particularly as he performed “All I Do Is Win.” Throughout the concert, T-Pain engaged the audience, thanking everyone for coming.

“Imma tell you this is by far the best crowd I’ve ever had in Chicago,” he said. “We’ve been here a bunch of times, and this is the most pumped set of motherf—ers.”

Visibly exhausted, T-Pain had to take breaks and eventually began to perform while seated. He still managed to entertain the crowd.

“This is the most f—ed up way to find out you’re out of shape,” T-Pain said. “I just realized how f—ing fat I am.”

T-Pain also freestyled without accompaniment and sang a slow and acoustic rendition of “They Don’t Know.” A&O Productions chose T-Pain after hearing his concert on NPR’s Tiny Desk where he performed his signature songs including “Buy U a Drank (Shawty Snappin’)” without his iconic use of Auto-Tune, Morgan Hecht, the group’s director of concerts, told The Daily in an interview earlier this month.

Many students said they were excited to hear T-Pain, who was particularly popular when they were in middle school.

“I hadn’t listened to his music in like seven years,” said Weinberg freshman Jonathan Huston. “I was excited to see how he’s changed.”

AlunaGeorge kicked off the night with “Attracting Flies” from their album, “Body Music.” Lead singer Aluna Francis also engaged with the crowd throughout her set, asking, “Chicago, how are you doing?” The group finished their set with “You Know You Like It.”

AlunaGeorge was selected to open the show because of the group’s popularity in the electronic music scene, Hecht told The Daily when the lineup was announced. She added A&O also aimed to find a strong female lead and was drawn to AlunaGeorge’s lead singer.

A&O spokeswoman Emily Howell said she was pleased with how the show turned out.

“It was great,” Howell said. “Overall, I think both performers were really happy (to come).”