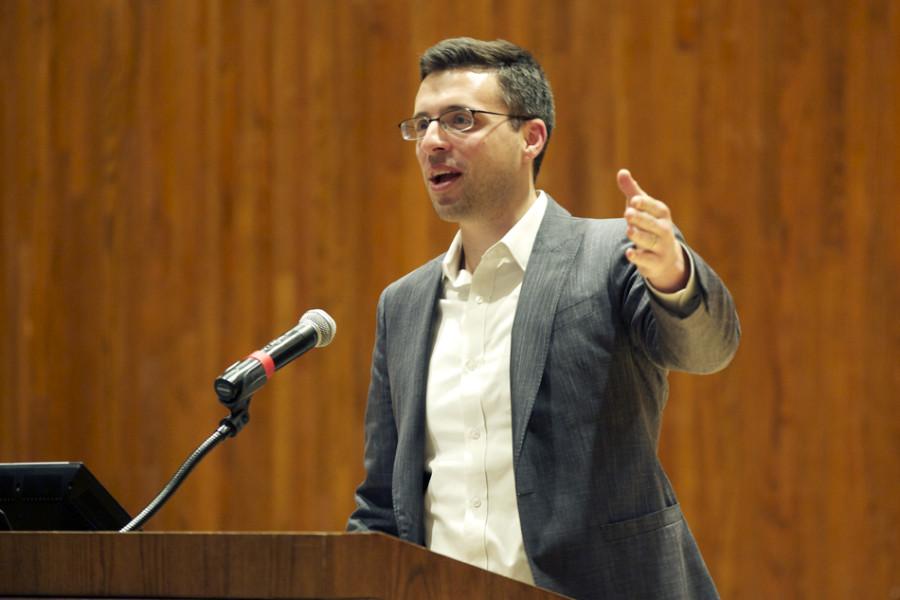 Ezra Klein, editor in chief of Vox.com, discusses politics Thursday in front of about 100 people at Norris University Center. The talk was presented by the Contemporary Thought Speaker Series.

The more people know about politics, the easier it is for them to believe exactly what they want, editor in chief of Vox.com Ezra Klein told a Northwestern audience Thursday.

Klein said people will believe what they want to believe about politics and will come up with the best possible case for what they believe.

“We are in a place now where it is really hard to think because the better we are at thinking, at researching, at learning, the easier it is for us to learn what we want to know,” he said.

Klein, who previously worked at The Washington Post, spoke to about 100 people Thursday in Norris University Center about how hard it is to change people’s minds and how easy it is for people to defend their opinions.

The talk was presented by the Contemporary Thought Speaker Series — a group that in the past has brought Jill Soloway, a comedian and Emmy-nominated TV writer, and Angela Davis, a political activist and author.

The board decided to bring Klein to speak because he has been at the “forefront of new media,” said president Joe Eichenbaum.

“Our goal is always to bring people who have very interesting ideas about how the world is changing right now,” the Weinberg senior said. “Ezra Klein is the first speaker we’ve brought who’s really changing how news is delivered and written today.”

Klein began his talk saying everyone in the room attending the talk was probably on some level interested in politics — and everyone was attending NU because they were smart. But his argument then took a turn.

“The convergence of those two things,” he said, “has a tendency to make you very stupid.”

He referenced a study done where people were asked to do a math problem.

“It was a kind of math problem that if you didn’t look at it very closely, you’d get it wrong,” he said.

At first, the problem was about the effects of a skin cream. But then, the researcher edited the same problem and made it about gun control policies. When the subject of the problem changed, statistics showed people’s math abilities stopped mattering, Klein said.

What really made a difference on whether or not someone got the problem right was whether they had a prior belief if gun control saved lives.

People have a lot of trouble admitting they’re wrong and being an outsider in their group, Klein said.

“Its a really painful thing to be on the wrong side of your tribe,” Klein said.

Weinberg sophomore Remy Smith said he went to the talk because he had read a lot of Klein’s articles, but what stood out most to him was Klein’s pessimism.

“Pessimism about global warming, the majoritarian system that we have in congress, the inability of parties to get anything done even if they have a majority in both houses and the presidency,” he said.

Even though he agreed with Klein’s points, Smith said he was surprised by how negative he was.

Klein said he usually gives a different talk about politics, one that felt more salient a few years ago when people cared more about American politics breaking down. But he went in a different direction this time.

“There’s been a sort of diminishment in interest in why Congress doesn’t work,” Klein told The Daily. “Disfunction is leading to apathy.”

But he also said the topic felt challenging to him and he hoped it challenged the audience, too.