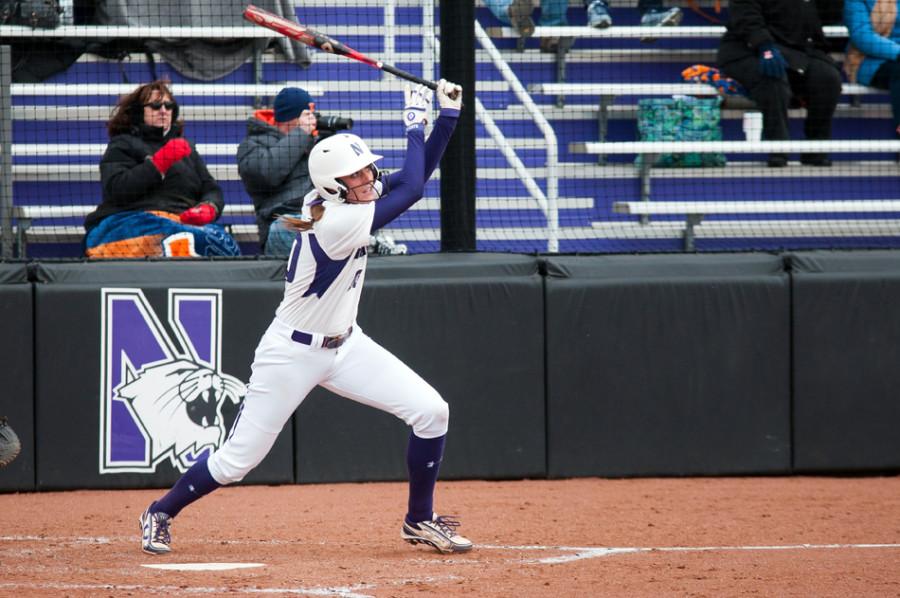 Andrea Filler watches a home run fly away. The junior infielder drove in 4 runs in Northwestern’s doubleheader against Illinois.

After winning the first game of a doubleheader against Illinois, Northwestern lost the second by yielding a sixth inning rally at Sharon J. Drysdale Field in Evanston.

The Wildcats (22-18, 10-6 Big Ten) put forth two strong offensive showings, scoring 20 combined runs throughout both games, but allowed the Fighting Illini (22-23, 11-6) to score 5 runs in the first inning of game two. The split leaves the race for a conference bye in the Big Ten Tournament wide open, with NU just a half-game behind Illinois.

The Cats’ offense dominated the first game. Although the Fighting Illini scored 3 runs in the top of the third, NU immediately returned the favor. The Cats scored 9 runs in the bottom of the inning off of two home runs and several miscues and walks from Illinois pitcher Jade Vecvanags.

Junior shortstop Andrea Filler stressed the importance of capitalizing on Vecvanags’ mistakes and making her work for outs.

“We really jumped all over these pitchers and really made them throw a good pitch for us, but also took our walks when we needed them,” Filler said.

NU plated 2 more runs in the fourth to seal the deal, run-ruling the Fighting Illini by a score of 12-4 at the end of the fifth inning.

Game two did not go as smoothly for the Cats — a 5-run first inning by Illinois left NU at a disadvantage. The Fighting Illini capitalized on two Cats errors and two walks by senior Olivia Duehr, who took the mound in the second game.

Down by 5, the Cats rallied back with a two-out double from Filler and an RBI from freshman Sammy Nettling to bring Filler home. In the bottom of the third, Filler drove in two RBIs, hitting a single to left field while the bases were loaded. Senior Anna Edwards also drove in a pair of RBIs on a left field homer in the bottom of the fourth.

With the score at 7-5, the Cats displayed a sense of urgency, scrapping hard for runs. Senior Andrea DiPrima doubled to center field, bringing freshman Sabrina Rabin home to leave NU only 1 run behind. The Cats evened the score by driving a fly ball to right centerfield to bring Filler home yet again.

Filler’s offensive play stood out through the game, and coach Kate Drohan noted how crucial those hits were to providing momentum for the team.

“Those hits have been pivotal to our offensive production,” she said. “The thing that I really respect about Filler is that she has a very consistent approach to her work on the diamond and her work in the batters box, and we’re reaping the rewards for it.”

Even after a strong fourth inning, NU was unable to stop Illinois from scoring 2 more runs in the sixth inning, bringing the score to 9-7. The Cats scored once more in the seventh, but they were unable to overcome the first inning deficit that the Fighting Illini had created.

Although the second game’s outcome was not what Drohan had expected, she believed there were several positives in the team’s play.

“We picked up a lot of walks today and they turned into some big innings,” she said. “We put ourselves in the position to win.”

The Cats will next face another conference rival, Ohio State, in a weekend series beginning April 24 at home.