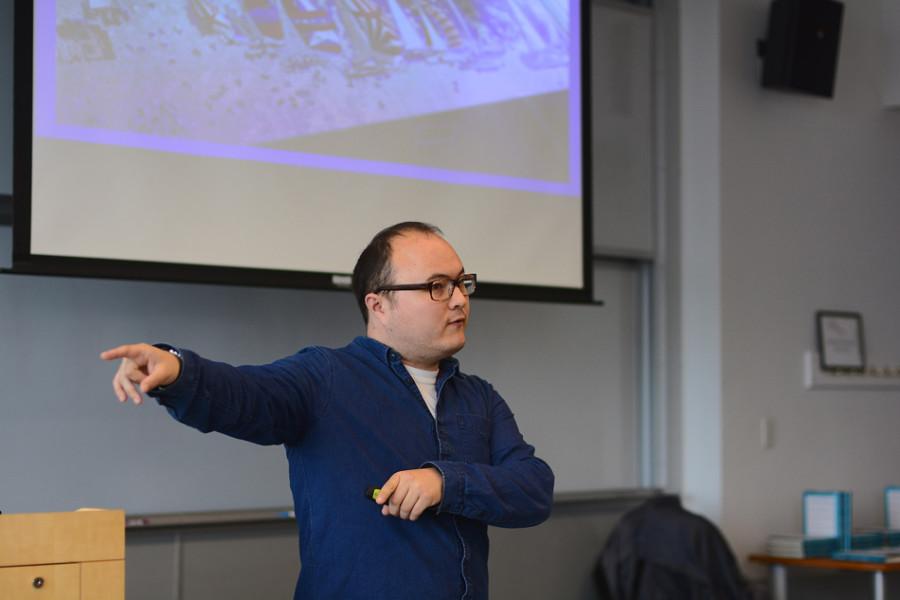 Northwestern alum Ben Parr explains the science behind getting people’s attention in an event at the McCormick Foundation Center. Parr introduced his new book “Captivology” during the event as part of Entrepreneur and Innovators at NU speaker series hosted by the Farley Center for Entrepreneurship and Innovation.

Sending people a message about yourself can sometimes come down to the colors you wear, said author Ben Parr on Wednesday.

Parr (Weinberg ’08), former editor of Mashable, visited Northwestern to talk about his recently published book “Captivology,” which describes the science behind getting people’s attention.

“Attention has become the currency of the modern economy,” he said during the event.

Parr’s visit was part of the Farley Center for Entrepreneurship and Innovation’s Entrepreneur and Innovators at NU speaker series. In the past, the event has been a day-long conference with multiple speakers, but this year organizers wanted to make it a speaker series to appeal to a larger audience, said Caitlin Smith (Medill ‘09), assistant director of the Farley Center.

Parr’s talk stood out from some of the others in that he is an NU alum and was therefore able to engage with his audience well, she said.

Parr told a crowd of more than 30 people how, with all the new information people are receiving everyday, it is difficult to manage everything. That is why it’s difficult for people to get their ideas and products noticed.

“I feel like Doug the dog (from the movie “Up”), always distracted by so many things happening all the time, sometimes unable to focus,” he said. “I’m sure all of you feel the same way too.”

“It’s not enough to have somebody listen to your ad or hear your song, you need to turn them to fans, to customers, to users, into followers,” he said. “You can’t skip over to the logs, you have to go through those three stages in order to capture attention.”

One of the captivation “triggers” he emphasized was acknowledgement, and said giving someone positive attention can capture people’s attention.

“That was new for me,” Taniesha Robinson (Medill ‘10, ‘11), a digital media specialist at the Farley Center, told The Daily. “I had never associated that with attention, that your connection with the person can actually be stronger than a physical pain that you’re experiencing and how do you create that as a business. That was probably the most interesting point.”

Robinson said Parr’s talk was particularly relevant because students are being innovative, but they have to learn to capture people’s attention.