‘The Grapes of Wrath’ comes to Northwestern 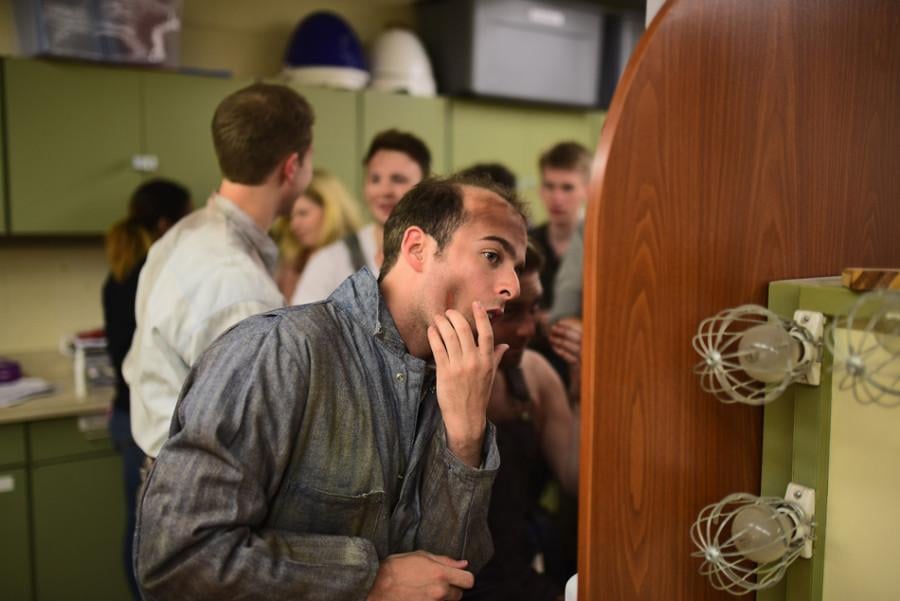 The stage adaptation of the award-winning novel, “The Grapes of Wrath,” opens on Friday at Northwestern. The show highlights the importance of helping one another and family.

Dust off your shoes, because the Joads will be hitting the road and coming to a Northwestern stage this Friday.

The show, an adaptation of John Steinbeck’s 1939 Pulitzer Prize-winning novel, “The Grapes of Wrath,” will run through May 3 at the Ethel M. Barber Theater. Steinbeck’s novel follows the Joad family as they migrate to California from Oklahoma during the Dust Bowl.

Originally adapted in 1988 by Frank Galati, a former NU professor, the production won a Tony Award in 1990 and was shown on Broadway and in London.

“People have often asked me, ‘Why ‘Grapes of Wrath?’” director Aaron Snook said. “I didn’t pick it as much as it picked me.”

His inspiration to direct the show was threefold, Snook said, citing his love for Steinbeck’s work, his admiration of Galati and his desire to tell a “truly American story.”

“It’s just the American spirit that I grab on to and do want to tell with my theater,” he said.

Snook, who is in his final quarter of coursework for NU’s MFA program, said although he’s still developing his craft, he’s been able to bring his own ideas to the table.

“As far as what I’ve brought to it, I think I brought my love of Steinbeck and Galati’s work to it,” Snook said, “but I’ve also tried to stay honest to myself at every turn.”

The production will feature choreography and live musicians, he said. The score for the production was specifically tailored for the NU adaptation of the show, with strong influences from singer-songwriter and musician Woody Guthrie, Snook said.

“Woody Guthrie was singing the songs of the Dust Bowl,” he said. “He was telling the stories of these people, and music was so integral to the people of the Dust Bowl … so I really felt like bringing that kind of authenticity … into the play would go a long way.”

Major themes throughout “The Grapes of Wrath” include helping one another and the importance of family, Snook said.

“What I’ve been learning myself from the Joads is this idea that when someone asks you for help … you’ll just give them help without any questions asked,” he said. “Only with all of us giving help will we move forward as humans, as a country, as individuals.”

The production will also feature talkback discussions with the cast after three of the shows, Snook said. The talks will focus on the theme of community, the history of the show itself and Steinbeck’s original work.

“Talkbacks give an opportunity to continue the conversation,” Snook said. “Hopefully when they leave the doors, that conversation will continue into their lives.”

Communication junior Jack Olin, who read the novel in high school, will play the role of main character Tom Joad, a recently released prisoner who “fights hard for family.”

“I think it’s a really good chance to see people being very vulnerable on stage,” he said. “This play especially pushes the actors to be very vulnerable and brave, and that’s so exciting to watch on stage.”

Olin, who has worked with Snook in the past, said the opportunity to work with Snook again was one of the reasons he joined the production.

Snook hopes his production will change people’s perceptions of “The Grapes of Wrath” to be more than just an assigned high school reading.

“A lot of people … have this impression of this dusty old book jacket, something that they were assigned to read in high school,” Snook said. “What I’m excited for is for them to sit down and for the play to start … and (for them to) shake off that dust from the book jacket.”

Although it hasn’t been easy, Snook said he is looking forward to bringing the story of the Joads to an NU audience.

“It is the hardest thing I have ever done, but I knew that going into it,” Snook said. “It’s a very, very big piece, but as hard as it’s been, it’s been that rewarding.”