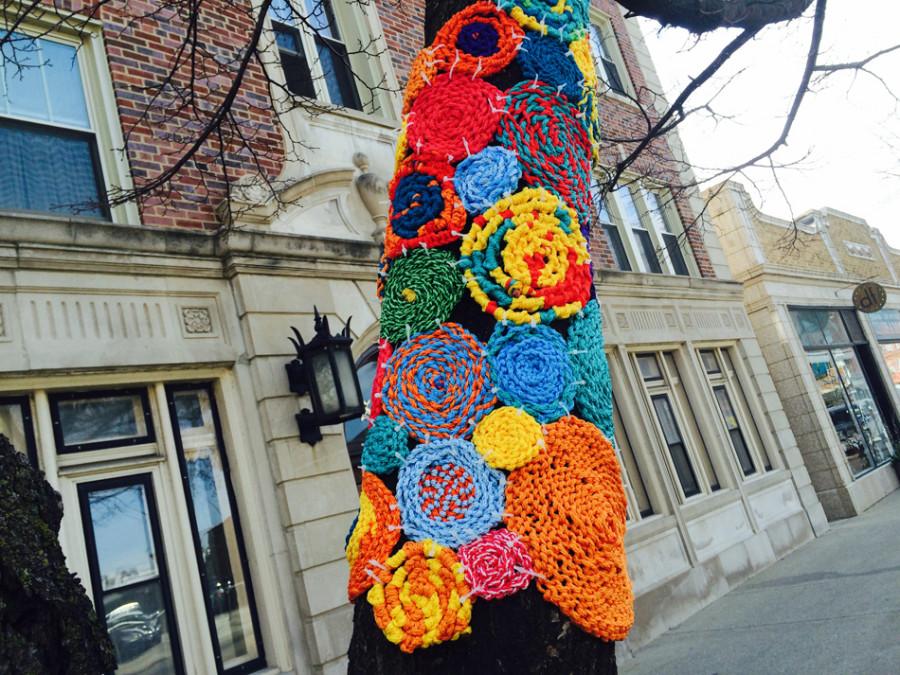 Yarn circles will cover Evanston in the upcoming weeks as part of the Evanston Community Yarn Art Project. Last Sunday, over a dozen Evanston residents got together to learn about how to become involved in the project.

In the coming weeks, bright circles of yarn will cover the trees and add spurts of color to downtown Evanston. The yarn circles, crafted by anyone willing to participate, are part of the Evanston Community Yarn Art Project, which aims to brighten up the city and make people more aware of its art scene.

Last Sunday, over a dozen Evanston residents gathered in Spex, an eyeglass store, for a workshop about yarn art and how to get involved with the Yarn Art Project. The yarn circles are due by May 6 and will be wrapped around the streets shortly before the Young Evanston Artists festival the week of May 11.

Headed by Jaime Leonardi, the Yarn Art Project aims to add color to the Evanston community by crafting circles of yarn, stitching them together and then placing them around the city. Leonardi has a background in arts and decor and is an owner of Stumble & Relish, a jewelry and gift shop located at 1310 Chicago Ave.

“We have a really big tree in front of our really small window,” Leonardi said. “I was talking to customers and trying to figure out what to do with it and so many people suggested that we make it a fun art project and put yarn on it.”

And the Community Yarn Art Project was born.

Leonardi said she decided to take on the project because she believes there is always room for more creative artwork in a neighborhood.

“On Chicago and Dempster, creativity has definitely been lacking,” she said. “There’s a lack in color and vibrancy in our community even though there’s a lot going on.”

Leonardi said her goal is to make Evanston a more creative, artistic environment, and she believes community art projects like these are important to better understand the city and the people around her.

“I have met so many amazing people,” she said. “Just getting out there and getting to know what’s going on, not just in your little world, is a cool thing to do.”

Leonardi described the project as the cheapest, easiest way to bring Evanston together. And in the end, she hopes it will bring color and life to the neighborhood.

“I want people to drive by and be like ‘Oh there’s something going on here! What is it? What’s this about?’” she said.

Stumble & Relish will host two other workshops like last Sunday’s, including one Thursday from 1-3 p.m. at Bagel Art, 615 Dempster St., and one Monday from 5-7 p.m. at Studio Armadi, 1303 Chicago Ave.

“Taking classes at the art center, I can see that there are many who appreciate art and creativity in this community,” she said. “But it isn’t as evident just walking around downtown or in the city.”