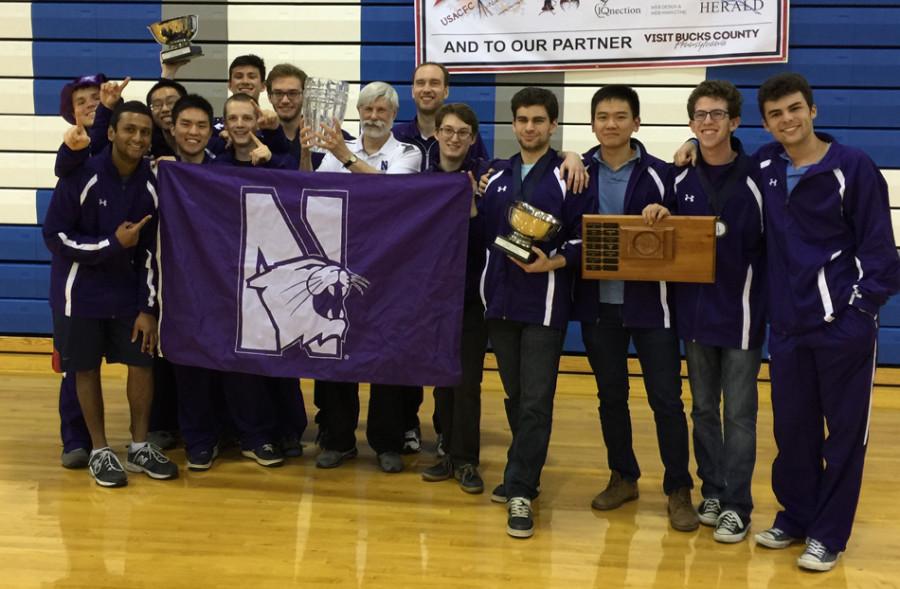 The Northwestern men’s club fencing team won the national championship for the fifth time in the club’s history. The team lost its varsity status at the end of the 1994 season.

The men’s club fencing team will finally be able to fill the big empty space on Patten Gym’s wall.

After winning the national club championships, the team will be able to hang a fifth banner. The current arrangement of the four banners has left a large space empty since the team won its last championship in 2011.

“We’ve been staring at this stupid space on the wall for the past three years and talking about how it’s really annoying,” said Dan Hurwitz, the club’s vice president and treasurer.

Hurwitz, a Weinberg senior, said the team used the empty space as motivation. He said this year the team was finally able to “put it all together” at the championship.

Northwestern stripped the men’s team of its varsity status at the end of the 1994 season to remain in compliance with Title IX, but coach Laurie Schiller remained with the team as it transitioned to a club sport. Schiller said the NU team is the only club fencing team in the nation to win more than two titles in the 13 years the national championship tournament has existed.

“That’s a tremendous accomplishment especially when you consider that compared to the women’s team. We can’t recruit (men for the team), we can’t do anything about admissions, we can’t give scholarships,” he said. “It says a lot about the determination and quality of the young guys who have come here and participated in the program.”

Weinberg junior Zak Shapiro, the club’s president, said the team has always been talented, but this year’s squad’s work ethic set them apart.

“At least half the club guys could have fenced varsity somewhere else and been a mediocre to decent varsity fencer, but usually for academic reasons, decided to come to Northwestern instead, found out about our club,” he said. “Our club is very strong and has a lot of support from that coaching staff.”

Shapiro said the banner has already been ordered and he hopes to have it up on Patten’s wall before the end of the academic year.