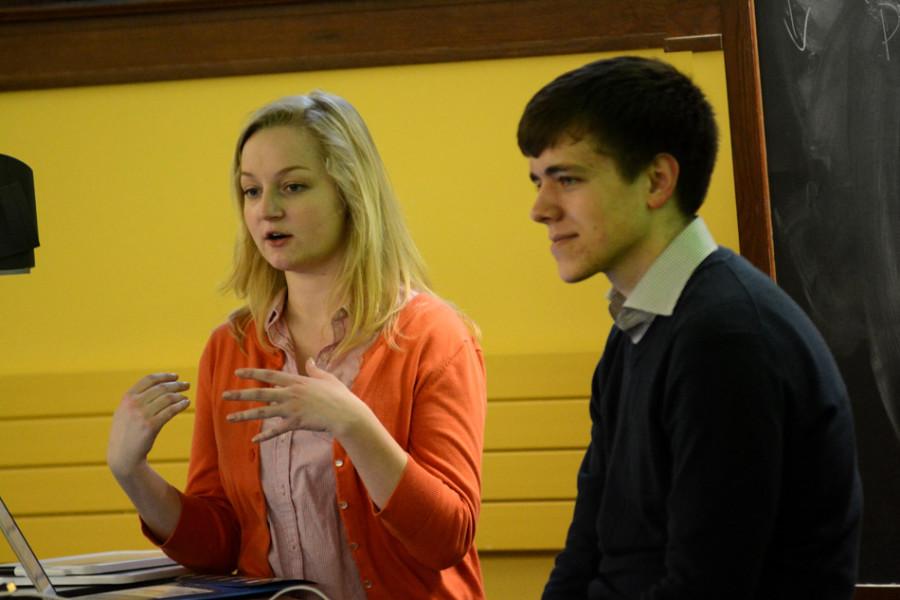 Julia Watson and Erik Zorn just completed their term as Associated Student Government president and executive vice president, respectively. Watson and Zorn said they are proud that the organization has become better at listening to students before it acts.

Minutes after swearing in her successor as ASG president, Watson delivered a short farewell address to senators, admitting it wasn’t the easiest road to the top.

When Senate rejected her bid for vice president for public relations by one vote during her sophomore year, she said she didn’t take it well.

“I left that night in tears,” she told senators, “questioning why an organization I had been a part of tore me apart like it did.”

She thought about quitting, she said. She even thought about taking a quarter off. Instead, she sat down with “each person who had a problem” with her and talked it out.

“Too often, we are told that the outcome of a conversation should be harmony,” she said. “I can name only a few projects, Therapy Dogs being one of them, where everyone is happy at the end of the day.”

Obviously, she didn’t quit. She was later re-nominated and confirmed unanimously.

In the last year, Watson said, marginalized voices were significantly “amplified” on issues including sexual assault, racism and socioeconomic status.

That shift, she said, reflects her view of what ASG’s main role should be.

“If ASG is not working on those issues, what are we working on really?” Watson told The Daily. “Yeah, we can fix dining hall hours and shuttle routes, but that’s not really meaningful in changing the Northwestern experience, in changing campus culture.”

Discussions of sexual violence permeated Watson’s term. The White House’s “It’s On Us” campaign launched a national examination of the issue on campuses, just a few months after philosophy Prof. Peter Ludlow was accused of sexual assault by a then-Medill junior.

“We’re in a really good place,” she said. “We’re coming into the spring with way more staffing, way more funding and way more attention to these issues.”

Watson specifically noted recent hires at the Center for Awareness, Response and Education.

Zorn agreed and said students now understand sexual assault as a “Northwestern issue,” not solely a national one.

“With the ‘It’s On Us’ campaign, we have been able to refocus the conversation,” Zorn said. “It’s not something we’re immune to, so it’s something everyone needs to be involved in.”

On another front, as the deaths of unarmed black men reignited a national discussion about race relations, Watson and Zorn presided over a Fall Quarter featuring similar issues on campus.

Watson said students need to graduate with the “knowledge and vocabulary” to discuss race and privilege. She said Sustained Dialogue is helping students meet that goal. The student-led program brings students together to discuss issues including race, class and gender.

Austin Romero, ASG vice president for accessibility and inclusion, said ASG wanted to assist students affected by these issues while not imposing its own, uninformed will on them.

“Events in the media hit home for a lot of students here,” the SESP senior said. “We wanted to see how we could support those students. … But we never took it upon ourselves to think we know what’s best for the community.”

Romero was consulted by the Panhellenic Association when it moved to create diversity and inclusion chairs in its chapters following “Jail ‘N Bail.”

He called Watson “an incredible mentor” and said her and Zorn’s legacy lies in a refocusing of student government’s role at universities.

“Sometimes in ASG, it can be too insular, it can think it knows how to solve all the issues,” Romero said. “Julia and Erik stressed that we don’t know everything.”

“Julia and I are probably not the best people to talk about how race affects our lives,” Zorn said. “We need to be able to talk to other people and elevate their voices rather than trying our best to imagine what they are.”

Star, who was sworn in as Watson’s successor last Wednesday, ran with the slogan “Listen Then Lead,” pushing for a student government that better incorporates students from outside ASG.

“Throughout their work, they were able to engage with groups on campus that ASG maybe hasn’t engaged in the past,” Star said. “They ensured that those student groups got a seat at the table when decisions were being made.”

In terms of socioeconomic issues, Zorn spoke about the success of the Student Engagement Stipend he helped launch. The $500 stipend allows students to spend less time logging work-study hours, freeing them up to pursue deeper roles within student groups.

The idea has spread, Zorn said. The University of Chicago’s student government announced last week it would create a similar stipend.

ASG’s Chief of Staff Andrew Green, who helped Zorn coordinate the program, said Watson and Zorn valued outside student input whenever taking on a project.

“Julia and Erik,” the SESP senior said, “both had a genuine commitment to developing relationships with other students who are working in this space.”

Walsh said the input Zorn sought from her allowed him to create a “tangible solution” to help students.

In addition, she said Watson and Zorn provided a crucial bridge between University officials and student leaders advocating for socioeconomic inclusion.

“Julia and Erik were able to give students an outlet through which they could finally talk within student government about issues of socioeconomic status,” Walsh said. “Through the conversations that the administration may have had with Julia or with Erik, the University was able to better hear those voices.”

As candidates, Watson and Zorn, whose campaign slogan was “Engage and Empower,” said they wanted to allow students to participate in ASG and use it to speak their minds.

The campus-wide discussion — and eventual lengthy debate — over a Northwestern Divest-sponsored resolution is perhaps the best example of this. The resolution, which passed Senate in February, asks the University to divest from six corporations the resolution’s authors say violate Palestinians’ human rights.

Watson said the resolution showed how student government can be a platform for marginalized students.

“Senate should be one of the modes in which ASG amplifies the voices of those who haven’t been heard,” Watson said, “and I think we did a very good job doing it.”

Much of ASG’s focus used to be “better bus routes, better meal plans,” but, Zorn said, its aims have recently shifted to more complicated issues like sexual violence and the Israeli-Palestinian conflict.

That shift, he said, has made all the difference.

“ASG has become a better listener,” Zorn said. “That change of mindset is something that has made ASG much better.”