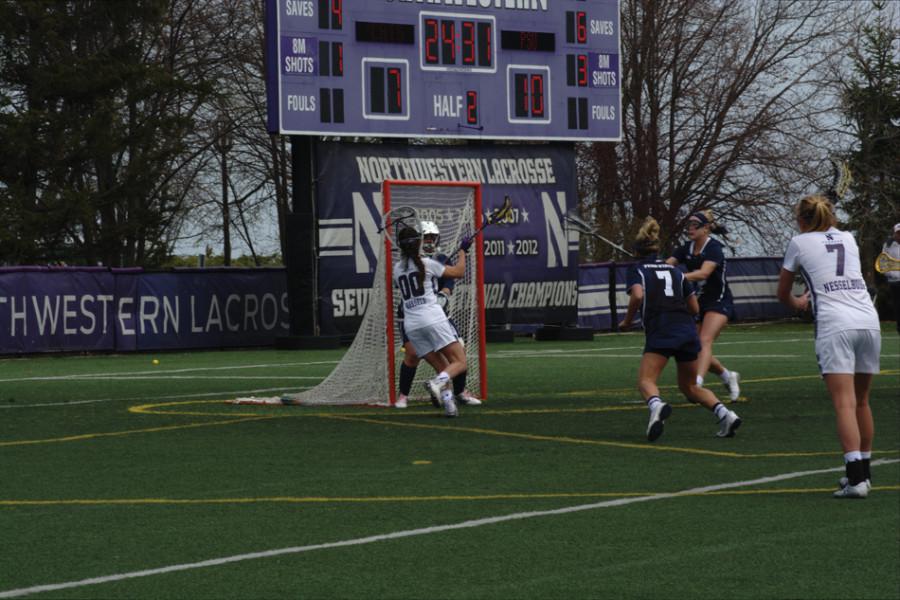 Corinne Wessels finds the back of the net. The freshman had 2 goals off the bench in Northwestern’s losing effort.

Another slow start doomed Northwestern and led to its fifth loss of the season.

“We have to come ready to play,” coach Kelly Amonte Hiller said. “We talked about it, we focused on it … but (our) team, for some reason, just thinks it’s going to happen for them.”

The game was an ugly affair for the Cats that the Nittany Lions dominated throughout. Reminiscent of a similarly slow start against then-No. 9 Stony Brook earlier this month, NU fell in a 10-4 hole at halftime that proved insurmountable in the second half.

Penn State was able to build up such a lead thanks to precisely executed offense. Kelly Lechner tied the game high with 4 goals and Steph Lazo added 3 goals, but the real engine of the Nittany Lions’ attack was Maggie McCormick, who had five assists.

On offense NU struggled to maintain control of the ball. Freshman Selena Lasota notched her 53rd and 54th scores of the season and junior Kaleigh Craig led the team with 4 goals, but the Cats did not consistently generate the quality chances needed to keep up with the Nittany Lions.

“We’re capable of beating any defense, we have a good game plan,” Craig said. “We just don’t always get it done. I think it’s more mental than it is physical.”

NU actually outshot Penn State, 26-22, and had six more draw controls — differences the Nittany Lions were able to make up with strong defense and netminding. Goalkeeper Emi Smith made an impressive 10 saves and Penn State was a perfect 12-for-12 on clearances.

A visibly frustrated Cats team lost its composure toward the end of the match. With 1:30 remaining in the game, senior Kara Mupo blatantly slashed a Penn State player and immediately trotted to the penalty seat on the sideline without even waiting for a referee to issue her a yellow card.

The Nittany Lions’ bench erupted in celebration at the end of the contest, reflecting the mentality many teams have against NU when visiting Lakeside Field.

“Every time we lose a game,” Amonte Hiller said, “they’re not just beating us, they’re beating the history of the program. These kids have to step up.”

The Cats have one regular season game remaining, at home against conference foe Ohio State on Saturday. A victory will jump NU to third in the final Big Ten standings while a loss will ensure the Cats fourth place out of six teams ahead of the Big Ten Tournament.