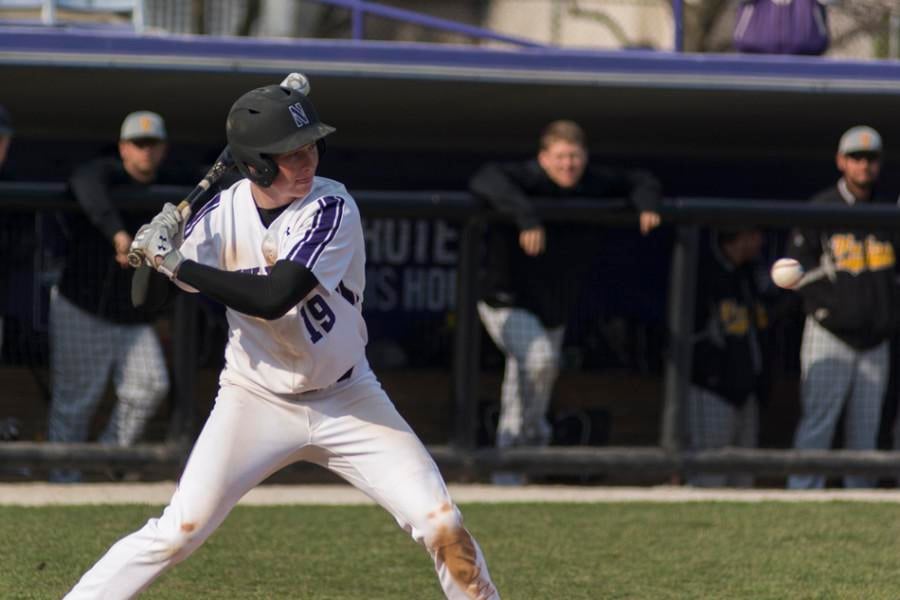 Sophomore outfielder Matt Hopfner takes a pitch. Timely hitting was the difference for Northwestern in avoiding being swept by Iowa in the final game of the series.

Northwestern felt a sense of deja vu Saturday when facing No. 24 Iowa.

Just like the series two weeks ago at Illinois, the Wildcats lost a heartbreaker Friday and then got rocked Saturday.

Two weeks ago, NU (11-26, 4-8 Big Ten) failed to bounce back and lost the final game of the Illinois series 17-2. This time, the Cats regrouped for a 4-1 win in the second game of a Saturday doubleheader to avoid a three-game sweep.

Following a 13-4 loss in the first Saturday game, coach Paul Stevens said he gave a pep talk to the team about school pride.

“I talked about what was on the front of their jersey and pride,” Stevens said. “They found a way to do some really outstanding things in the second game.”

A pair of unlikely sources were two of the keys to NU’s victory.

Star centerfielder Kyle Ruchim went 2-for-4 and set the tone with a home run in the game’s first at bat. Freshman third baseman Connor Lind sent a two-run single through the left side to open a 4-0 Cats lead in the top of the fourth inning.

“We haven’t gotten big hits in scenarios where we need them,” Stevens said. “Connor Lind came up big in that situation.”

Redshirt freshman Grant Peikert sent the Cats home happy with a five-out save, allowing just one runner to reach base on a walk.

Stevens said he thought his pregame talk may have given Mason some extra juice Saturday.

“He’s a laid back guy, but yesterday I saw some intestinal fortitude that I hadn’t seen in a long time,” said Stevens.

After more than two months on the road, the Cats finally return to Evanston for the home opener Tuesday, when NU hosts Milwaukee for the first game at a renovated Rocky Miller Park.

“It’s gonna be great to be home,” Stevens said. “It’s a very, very exciting time for this program to not only be coming home but to be coming home to a fabulous new facility is special.”