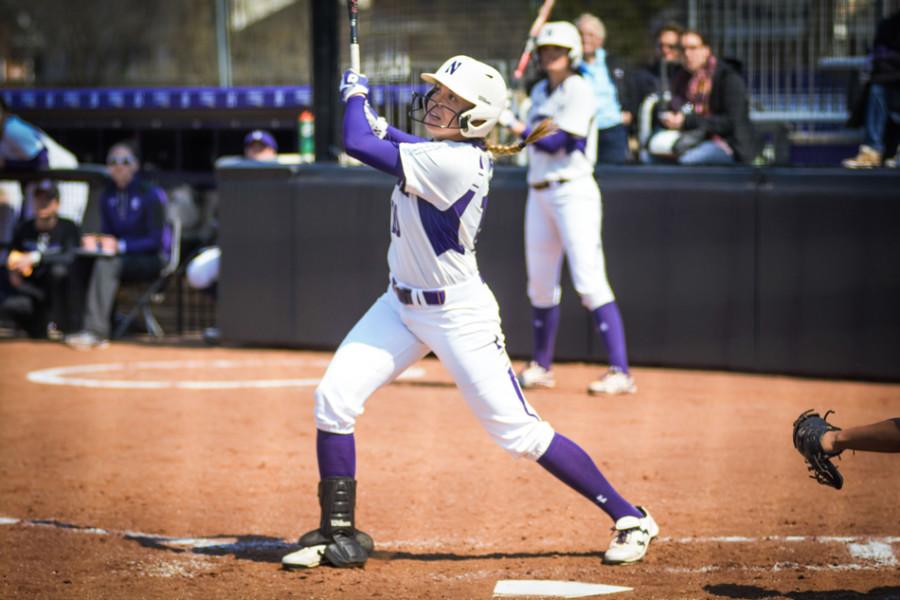 Senior Andrea DiPrima lifts a fly ball. DiPrima and the Cats have never won a game in Nebraska since the Cornhuskers moved to the Big Ten.

The Cats will try to keep their lead over Nebraska in the conference standings, battling the Cornhuskers for the third spot in the Big Ten. Although NU has never won a softball game in Lincoln, Nebraska, the team remains positive coming off of a close, hard-fought loss to No. 25 Notre Dame on Wednesday.

“We did a great job of controlling each inning defensively, and Kristen did a great job pitching,” senior rightfielder Andrea DiPrima said. “Looking forward, our next step is just to focus on ourselves and make those offensive adjustments.”

The Cats’ close loss against the ranked Irish may be the spark NU needs to get the fire going for a win or three against the Cornhuskers. The Cats played strong defense throughout the game, keeping the Irish from any big innings that would have given the game away, something that had been an issue for Wood in the Minnesota series last weekend.

Nebraska has seen mixed results lately, with one loss and two wins against Purdue in this past weekend’s series and a win over University of Nebraska Omaha on Wednesday night. The Cornhuskers’ bats have been on fire, with junior Kiki Stokes and sophomore MJ Knighten each hitting over .400 this season. The two have a combined 84 runs and 82 RBI.

The Cats’ lineup has also fared well offensively, with DiPrima hitting .419 on the season and junior shortstop Andrea Filler hitting 42 RBI along with her NCAA-leading eight sacrifice flies.  Freshmen Sammy Nettling and Sabrina Rabin are also batting superbly, combining for 59 hits on the season following Wednesday’s game in South Bend.

But for the Cats to bring home wins this weekend, Wood must repeat her stellar performance against the Irish.

First baseman Julia Kuhn said she and her teammates must stay confident and maintain their composure to win against Nebraska, especially with the conference history between the two.

“Every weekend is very important to us,” Kuhn said. “But we’ve always had this thing with Nebraska where it’s always tough to beat them. It’s one of the weekends we really get up for so it’s really important for us as a team.”

After all, NU has only three more Big Ten series and a non-conference game against DePaul before the tournament begins in May. But the Cats continue to take it one game at a time, no matter who the opponent is.