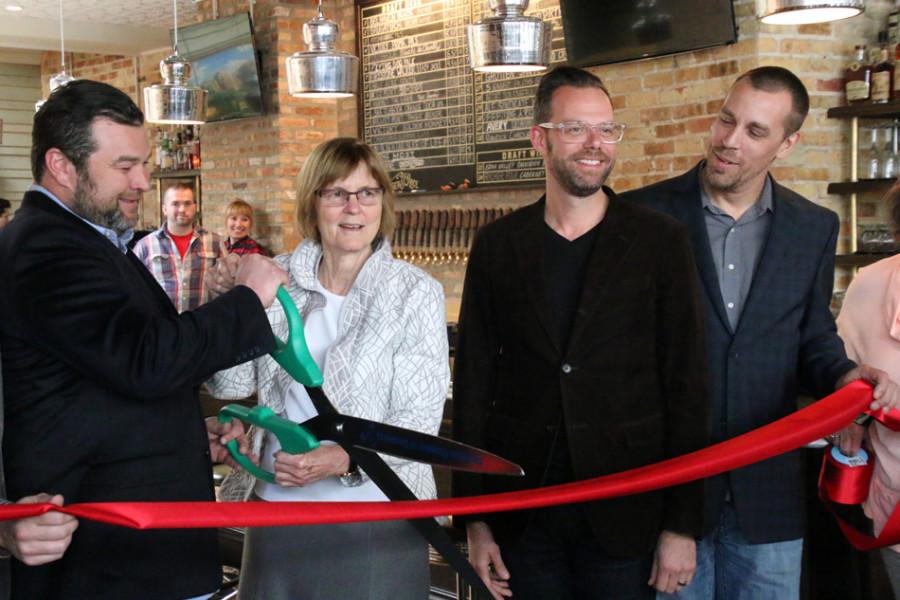 Mayor Elizabeth Tisdahl and members from Footman Hospitality cut the ribbon at Bangers & Lace’s grand opening. The bar officially opened in the space formerly occupied by The Keg of Evanston in December but held off on holding a ceremony until this spring.

More than 25 city officials and restaurant associates celebrated the ribbon-cutting with drinks and hors d’oeuvres. Bangers & Lace, a Chicago-based tavern, moved into the space, 810 Grove Street, last year. The location has been vacant since The Keg of Evanston closed in March 2013.

Although Bangers & Lace officially opened on December 27, 2014, the bar decided — in coordination with the city — to postpone the ribbon-cutting ceremony until the weather improved.

“We have a lot of friends who live here,” Freiman said. “It was just a natural extension of the city.”

The Evanston location is constantly busy, Freiman said. He added that Bangers & Lace’s selection of craft beers and gourmet food brings in a mix of customers from the Evanston community, including young professionals from the city and other northern suburbs who stop by the bar instead of heading all the way into Chicago.

Elaine Kemna-Irish, executive director of the Evanston Chamber of Commerce, said she hopes that is the case. Although attracting Northwestern students is important, Kemna-Irish said businesses need to appeal to the young professionals who work in the city year-round.

“A lot of employers (in Evanston) have young demographics,” Kemna-Irish said. “We want them to be able to stay in Evanston instead of going to Chicago.”

Unlike The Keg, which had a more casual atmosphere, Bangers & Lace sports an upscale interior and wide-ranging beer selection. Tisdahl revoked The Keg’s liquor license in January 2012 following a string of arrests at the establishment for underage drinking.

“Essentially everyone wanted to see (The Keg) go,” Freiman said. “It was a notorious establishment that had lots of problems over the years and it represented everything a bar is not supposed to be.”

Tisdahl appeared happy with the change of tenants in the space.

“This place looks great, especially considering what was here before,” she said.