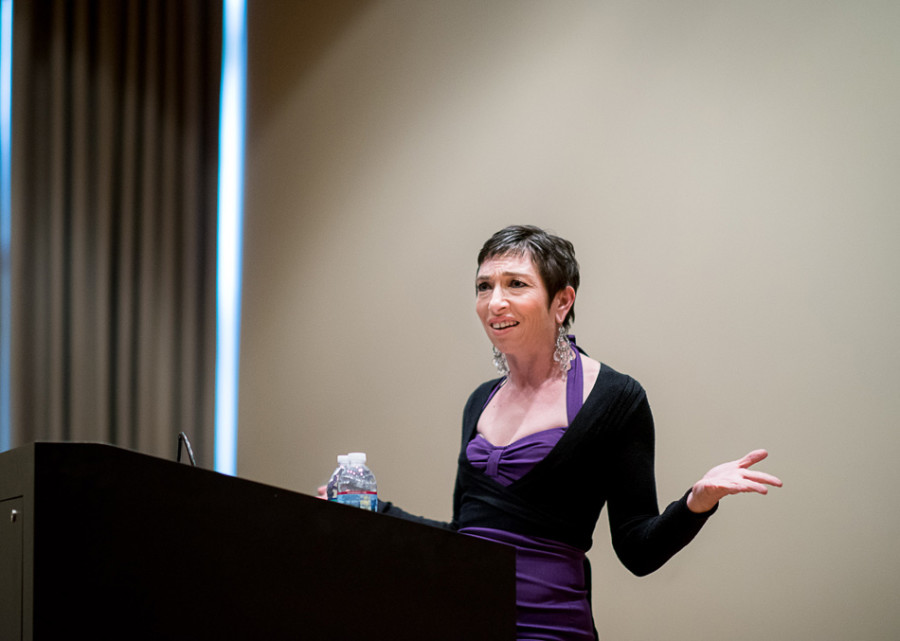 Naomi Grossman, an actress on “American Horror Story,” discussed her experiences in Hollywood on Wednesday night. Grossman graduated from Northwestern in 1997.

Actress Naomi Grossman spoke Wednesday night about her journey to Hollywood and advice she wishes she knew before going there.

Known for her role as Pepper on FX’s “American Horror Story,” Grossman (Communication ‘97) gave a talk titled “So, You Wanna Work in Hollywood” in Annie May Swift Auditorium to about 30 people. The event was part of a speaker series put on by the School of Communication’s External Programs, Internships, and Career Services, known as EPICS.

“For the most part, unless you’re Zooey Deschanel, actors first starting out in Hollywood right out of college are usually demoted to those ‘nurse number four to the left’ type of roles,” Grossman said. “There’s nothing wrong with these kinds of roles, but they’re typically for wallflowers. They’re there to support the star and I’m not like that.”

After Grossman graduated from Northwestern, she knew she wanted to go to Los Angeles and have her own sitcom. But when she first got to Hollywood, she struggled to break into the entertainment industry. Instead, she worked as a waitress by day and a cocktail server by night.

“About five years in, I had an epiphany,” she said. “I realized I want to be an actress, but I’m not acting … So if no one would cast me, I cast myself.”

She wrote, produced and starred in a solo show titled “Girl in Argentine Landscape,” based on her personal experience as a foreign exchange student in Argentina her senior year in high school. It received critical acclaim from LA Weekly, as did her second solo show, “Carnival Knowledge: Love, Lust and Other Human Oddities.”

However, she still wasn’t getting attention from Hollywood, so she decided to put some of her work on YouTube. Some of the videos received more than one million views and were shown at comedy and theater festivals nationwide.

“This was keeping me in the game,” Grossman said. “I was keeping my creative mind active, fine-tuning my comedic voice, putting myself out there in case anyone cared. And finally, someone did.”

She got an audition for “American Horror Story” and was eventually cast as Pepper. What was originally a small role ended up spanning two seasons, put her on the map and changed her life.

“I got lucky,” Grossman said. “But what is luck? Luck is when preparedness meets opportunity. My ‘If you build it, they will come’ attitude really ended up paying off in the end.”

Colin DeKuiper, assistant director of EPICS, said that Grossman is an “incredibly successful” alumnus. The focus of EPICS, DeKuiper said, is to look for alumni who are out in the world doing great things.

Grossman gave students 10 tips to stay sane once moving to Hollywood. She told them to make sure they love what they do and do work they are proud of.

“I think listening to yourself is the most important,” Grossman said. “Deciding what it is that you want and going for it in spite of the odds … Spend your time however it fulfills you. We create our own realities.”

She also told the audience to not make a backup plan or give themselves a deadline.

“The minute you impose a time limit, you’re giving yourself an out,” she said. “You’re implying that this might not happen for you so you prepare yourself with a plan B, which means you don’t actually love plan A enough.”

Weinberg freshman Karen Adjei said she attended the talk because she is a big fan of “American Horror Story.”

“Her speech was very inspiring and it answered a lot of questions about just life in general and navigating Northwestern,” Adjei said.

The last piece of advice Grossman left the audience with was to not micromanage life.

“Do what you do as best as you can and don’t get attached to results,” she said. “The end in store might even be better than the one you envision for yourself.”