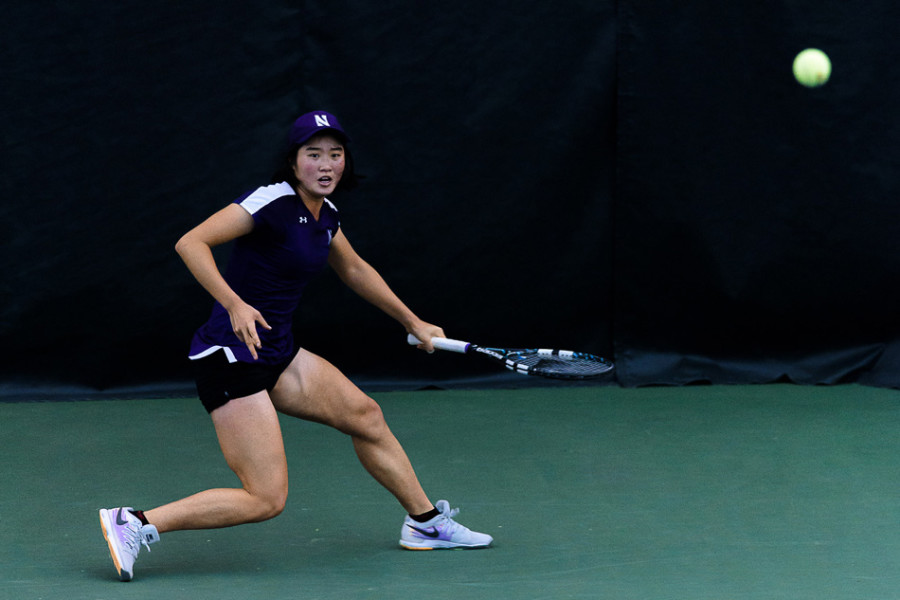 Lok Sze Leung returns a shot. The senior won both her singles matches and both her doubles matches over the weekend as Northwestern went undefeated.

The Wildcats emulated their form from a year ago with two dominant wins this weekend.

No. 23 Northwestern squashed No. 61 Minnesota, 7-0, and Wisconsin, 6-1, in one of its most impressive weekends of the season.

“I think we can use this weekend as a catalyst for the future,” freshman Alex Chatt said.

The Cats have now won their past five Big Ten matches and eight of their past 10 overall.

Junior Alicia Barnett had a particularly strong weekend. She has struggled filling the graduated Veronica Corning’s shoes this season since being promoted from third to first singles.

“It has been frustrating, but it’s to be expected,” Barnett said. “Coming from three and having a perfect record in the Big Ten to playing one and losing is obviously going to be quite demoralizing at times.”

This weekend is the first time since February 14 and 15 against Penn State and Purdue that Barnett has won both her matches in one weekend.

“Going 2-0 and winning both of her breakers hopefully will give her a push forward,” coach Claire Pollard said. “I talked to (Barnett) and said, ‘Maybe you can’t always win, but you can always grow and learn from this experience, and you can always be a better player as a result of having the opportunity of playing number one.’”

The freshmen were impressive as well with a 5-1 overall record. Erin Larner shined with a 6-0, 7-6 (4) victory over Minnesota’s Caroline Ryba and a 6-4, 6-0 win over Wisconsin’s Maria Avgerinos. Alex Chatt also won both her matches in straight sets and Rheeya Doshi pulled out a tight come-from-behind three-setter, 2-6, 6-3, 7-6 (1), over Minnesota’s Julia Courter.

Most importantly, NU put on a show in doubles.

Since winter break, the Cats have rolled over the competition. They’ve won the doubles point in every Big Ten matchup in the spring season.

This weekend, NU won four of its six doubles matchups and led in a fifth before play was suspended.

“Now that we’ve stabilized our doubles lineup,” Pollard said, “we’re constantly getting wins from all over the place.”

No. 39 Barnett and Larner won 8-6 and led 7-4, No. 70 Doshi and sophomore Brooke Rischbieth split their matches, and Chatt and Leung cruised with a pair of victories.

The Cats return to action next weekend for their final matches of the regular season against Iowa and Nebraska.