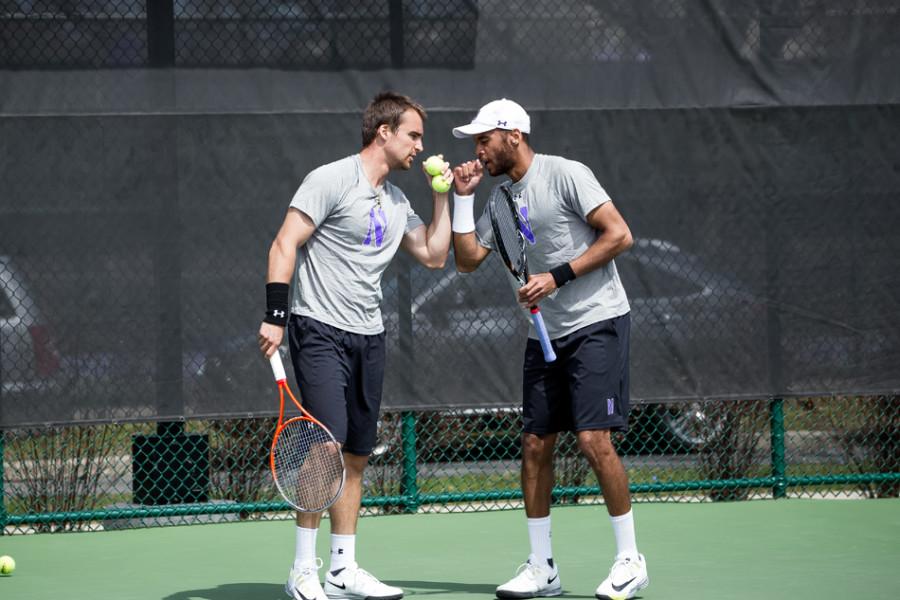 Sophomore Sam Shropshire and senior Alex Pasareanu celebrate a point. The No. 44 doubles pair helped Northwestern to victory over Iowa on Sunday.

The Wildcats are clicking at the right time.

No. 26 Northwestern (18-7, 7-2 Big Ten) picked up two more victories this weekend and is on a six-match winning streak.

“I think we were competitive at all spots,” coach Arvid Swan said. “I was just pleased with the preparation and then how we competed throughout the weekend.”

The Cats’ weekend started with an easy 4-0 victory over Nebraska (10-11, 3-6) on Saturday. NU picked up the win without having to finish all three doubles’ matches and half of the singles’ matches.

The doubles pairing of sophomore Strong Kirchheimer and junior Fedor Baev started off hot and took a 6-0 lead in their match before eventually winning it 8-5. Sophomore Sam Shropshire and senior Alex Pasareanu brought home the doubles point for NU by claiming an 8-5 victory in their match as well.

Shropshire then sped through his singles match to get the third point of the match for the Cats, thanks to his 6-3, 6-4 win.

“That’s what everybody’s trying to do — get that first point on the board,” Shropshire said. “Definitely gives us a lot of momentum when you hear somebody scream, ‘that’s the match!’”

Despite great play, the Hawkeyes simply could not keep up with the Cats on Sunday. NU picked up a 6-1 win, but the scoreboard did not properly show just how close the match was.

Sophomore Konrad Zieba got a point for the Cats with a 6-2, 6-3 victory, a match that was a perfect example of the score not telling the full story.

When it came to Zieba’s match against Iowa’s Dominic Patrick, he looked at mental toughness and his ability to stay positive as factors for why he walked away victoriously.

“As soon as he started getting down on himself, I kind of jumped on it,” Zieba said. “He cracked, he was missing a lot, and I made sure to take advantage of that.”

Although two wins added to NU’s record is a big deal, the weekend also helped the team to prepare for the remainder of the season.

The Cats played outdoors for both matches, an experience that could be crucial as they get ready for the Big Ten Tournament and the NCAA Tournament. NU had to deal with Chicago wind this weekend, and although that does not make for a model environment, it does make for good practice.

“You have to be able to play good tennis in conditions that aren’t ideal,” Swan said. “We know that going forward there’s potential to play more outdoor matches. So to be able to play outdoors this weekend is great, it’s great preparation for the rest of the year.”

The Cats have won 12 of their last 14 matches and have gone 5-1 against ranked teams during that span. NU is fourth in the Big Ten, just two games behind Illinois in first place and only one game back of Ohio State and Minnesota in second place.

Although it looks like the Cats are finding their stride as they approach the final stretch of the season, they are also looking to take their game to another level.

“We still can play better than we are,” Swan said. “We’re improving each weekend, which is the positive thing, and we still have improvement to go, so that’s exciting as well.”