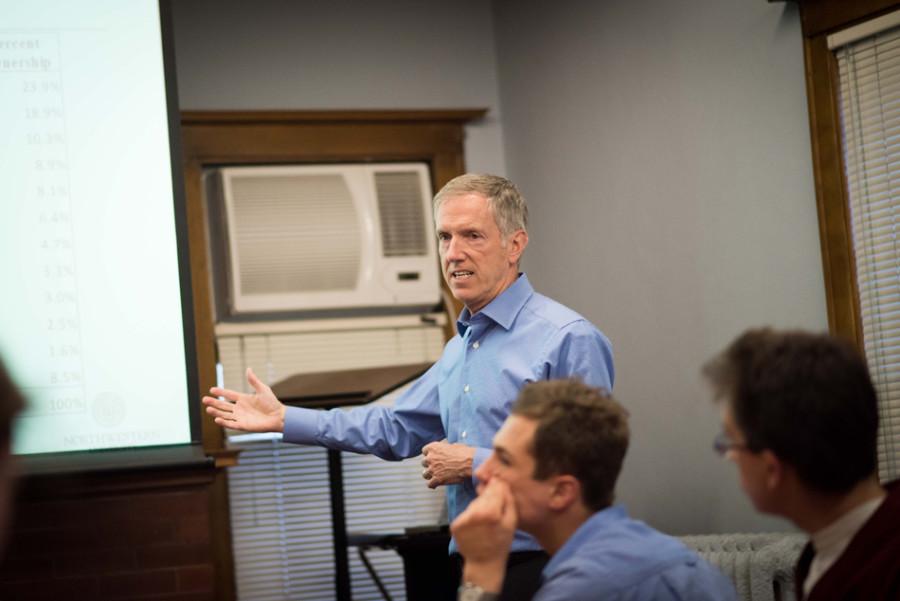 Northwestern may create a committee that would weigh the social implications of its investments to address issues brought up by Northwestern Divest, Fossil Free NU and other movements, the University’s chief investment officer said Monday.

William McLean, who heads NU’s investment office, said he will meet with outgoing Associated Student Government president Julia Watson next week to discuss the possibility of creating a “socially responsible investment” committee. McLean said he is open to the possibility of creating such a committee. Both ASG and Faculty Senate have voted in favor of establishing one.

“There’s an argument for having a central place where some of these (investment issues) get vetted,” McLean said. “We’re interested in hearing student voices, and maybe a committee is a better way to do it.”

McLean discussed NU’s endowment and recent controversies about its investment in front of an audience of more than 20 people at the Roberta Buffett Center. Representatives of the two major divestment organizations, NUDivest and Fossil Free NU — formerly DivestNU — were present at the event.

The investment committee is reluctant to divest from fossil fuels despite sustained student support, because trustees are concerned coal divestment would open the door to more divestment issues, McLean said.

“Where do you draw the line?” McLean said.

An ASG referendum on divesting from coal passed with 74.15 percent of the vote Friday. McLean said he was not aware of the referendum, but would bring its results to the investment committee when they meet next week.

The Board of Trustees’ investment committee, which oversees NU’s endowment investment policy, voted not to divest from coal in November. McLean said the referendum results could open up the conversation.

“We have a big coalition of support behind us, the board just needs to start listening,” said Scott Brown, a leader in Fossil Free NU.

The Medill sophomore and former Daily staffer said the group’s next goal is to build a broader base of support among faculty and alumni to put more pressure on the investment committee.

Next week, McLean will also sit down with NUDivest, the student movement that wants the University to divest from six corporations that supporters say violate Palestinians’ human rights.

“We’re encouraged that he’s open to the idea of a committee for socially responsible investment,” said Weinberg junior Noah Whinston, an NUDivest organizer.

However, Whinston said McLean made it clear such decisions ultimately rest with the Board of Trustees.

McLean referenced the University’s history of divesting from companies associated with human rights issues — NU was one of many universities to restrict investments in companies that did business in Sudan in 2005 in response to the conflict there.

McLean’s talk was the third in a series on divestment put on by NU’s Political Union. The Monday event follows a Winter Quarter panel discussion between NUDivest and Coalition for Peace, two student groups that represent opposing sides of the Israeli divestment issue, and a panel last week about coal divestment between members of Fossil Free NU and NU College Republicans.

“At the end of last year, one of our goals was to increase awareness of campus political issues,” said Political Union co-president Alexi Stocker, a Weinberg junior. “We find students really like being able to engage and discuss with each other issues of this kind of importance.”

This article was updated April 14 at 1:25 p.m. to clarify McLean’s position on the creation of a Northwestern committee to weigh the social implications of its investments.