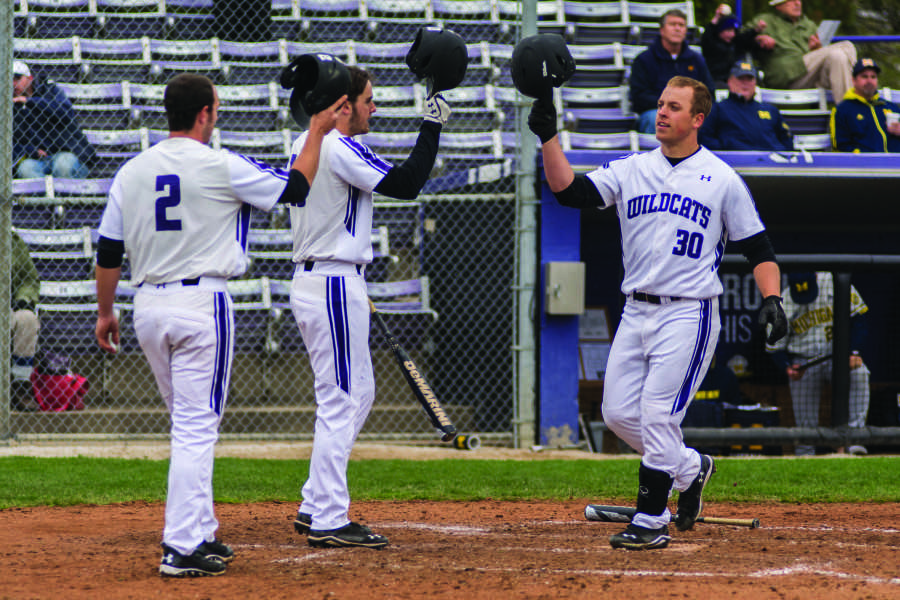 Joe Hoscheit celebrates a run with his teammates. The sophomore’s clutch hitting helped Northwestern rally to its only win of the three-game weekend.

Following a comeback win Friday, Northwestern lost control of its series at Michigan State, dropping the final two decisions of the three-game set.

The Wildcats (9-24, 3-6 Big Ten) won the first game in dramatic fashion. After struggling against Spartans starter Cam Vieaux for seven innings, the Cats exploded in the eighth with 5 unearned runs.

Sophomore Joe Hoscheit’s two-run single gave NU a 7-6 lead, of which the Cats narrowly maintained control. Michigan State (18-15, 4-5) got the tying and winning runs in scoring position with two outs in the bottom of the ninth, but could not push either across the plate.

However, the script flipped Saturday. NU held a 6-3 lead in the seventh as junior Reed Mason came in to attempt a seven-out save.

Mason survived the first four outs without harm but unraveled in the ninth inning. The Spartans rallied for four runs and a walk-off victory. Freshman Zack McGuire was the hero with a pinch-hit single to win the game.

The Cats had some early chances Sunday but could not capitalize before the game got away from them.

NU stranded a man on second in the first inning and left the bases loaded in the second. Meanwhile, Michigan State teed off on Cats pitchers sophomore Joe Schindler and junior Jake Stolley, grabbing a 9-1 lead after five innings.

The Spartans piled on some late runs in a 14-3 win.

A bright spot for the Cats was junior first baseman Zach Jones, who went 4-for-4 with a walk. But he was far from the game’s most impressive player — Michigan State first baseman Ryan Krill went 5-for-6 with six RBIs.

With Sunday’s loss, the Cats drop to 10th place in the Big Ten standings. Following a non-conference game at UIC, NU will head to first-place Iowa’s home turf for arguably the toughest series remaining on its schedule. The series spells trouble for the Cats, who have lost five of their last six conference outings.