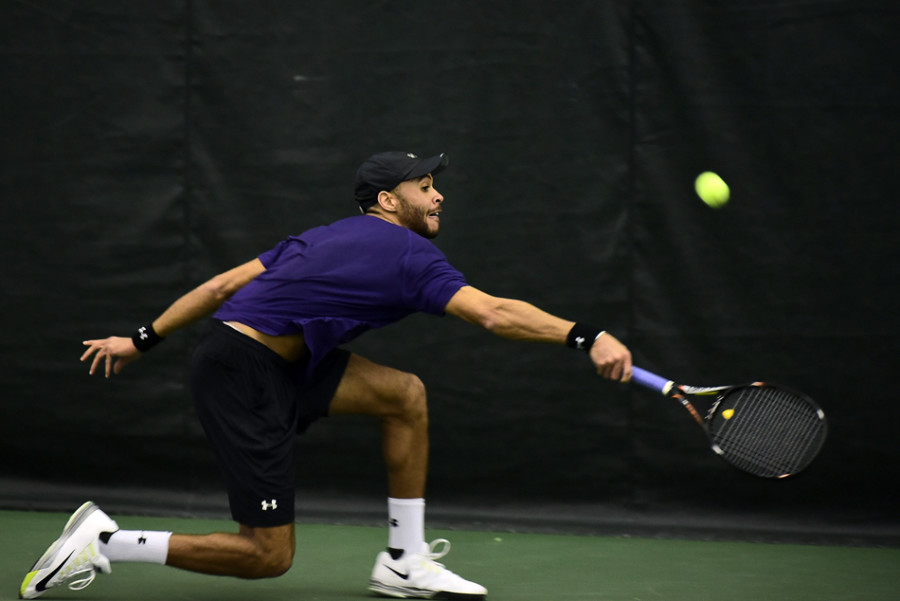 Sophomore Sam Shropshire lunges for a backhand. Shropshire and the No. 26 Wildcats host a pair of Big Ten opponents this weekend.

Northwestern is entering the final stretch of the season and will host its final two home matches of the year this weekend.

“I think we feel good,” coach Arvid Swan said. “We’ve been playing good doubles, which has been good to see the last few weeks so we’ll be looking for that to continue.”

Last weekend, the Cats’ doubles helped propel them to two road victories by taking care of business early. NU won the doubles point in both matches and was not forced to finish the third doubles match in either competition. The Cats have won the doubles point in each of their last four matches, which has contributed to the team’s four-match winning streak.

Although the doubles point is a big boost for NU on the scoreboard, it can also mean a lot more than that. For players that participate in both doubles and singles, helping the team win the doubles point can help the players get into a positive state of mind going into their singles matches.

“It definitely helps mentally going from a doubles (match) if you get a win going to singles,” sophomore Sam Shropshire said. “You’re just a little bit happier and all that stuff, but it’s definitely been helping the team doing well in doubles.”

Last season, the Cats won the doubles point in each of their two matches with Iowa, but lost it when they faced off against Nebraska. If NU wants a strong finish to its conference season, picking up the doubles point could go a long way in both of these upcoming matches.

“Doubles is important,” Swan said. “If you don’t win the doubles point, you have to try to get four. But the way we’ve been playing, I’ve been really pleased with the progress. … This past weekend was probably our best doubles that we played all year.”

The Cats are sitting fourth in the Big Ten, and are just one game behind Minnesota and Ohio State, who are tied for second. Two wins for NU this weekend could put them in a better position for the conference tournament at the end of this month.

The Cats were originally scheduled to take on Detroit this weekend as well, but poor weather conditions caused problems for Nebraska’s travel arrangements, resulting in the cancellation of the matchup with the Titans. The match with the Cornhuskers was also moved from Friday to Saturday.

With the removal of the Detroit game from the schedule, NU has only four matches left in the season, all against Big Ten competition. The Cats are in great position to finish in the top four in the conference, but Swan is not concerned about where NU sits in the conference standings just yet.

“It doesn’t matter until the end of the year,” Swan said. “You got to try to win each match that is ahead of you. The Big Ten is tough, every team is good.”

Although the Big Ten schedule forces the Cats to take on some great competition, they are riding a hot streak and have confidence going into the weekend.

“I feel good,” sophomore Strong Kirchheimer said. “I think everyone is starting to really click and we’ll just take it one match at a time and see how it goes.”