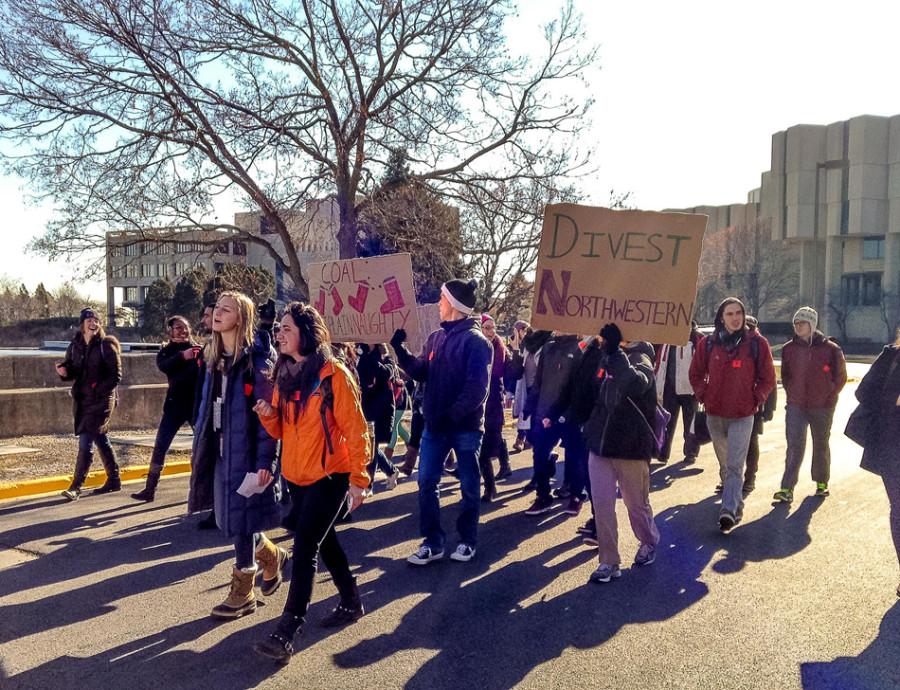 Students march to a Board of Trustees meeting in November to ask Northwestern to divest its endowment funds from the coal industry. Students can voice their opinions on coal divestment through an ASG referendum in this year’s elections.

This year’s Associated Student Government ballot includes a referendum asking students whether they believe Northwestern should divest from coal companies.

Fossil Free NU, which sponsored the referendum, is looking to gauge student interest on the issue. Formerly known as DivestNU, the group has been calling on the Board of Trustees to remove the University’s investments in coal companies since 2012. This is the first ASG referendum in at least five years, said Christina Cilento, ASG’s vice president for sustainability.

“Climate change is affecting everyone and it’s just getting worse,” said Natalie Ward, the head of communication for Fossil Free NU. “A vote for divestment will show the administration and the Board of Trustees that we really should do something to positively affect climate change.”

Both ASG Senate and Faculty Senate passed resolutions in support of divesting from coal in 2013, Cilento said.

Fossil Free NU met with a trustee during Fall Quarter and had a productive meeting, according to Cilento, who is the group’s head of public relations. However, Cilento said there was no decision about how the trustees would proceed.

“We want to renew the test and see if students on campus still care about this issue,” the Weinberg sophomore said. “If the vote is in our favor, it would really show that look our students really care about. That would kind of put pressure on the Board of Trustees.”

The referendum, which needs a simple majority to pass, was added to the ballot because Fossil Free NU obtained the needed 200 signatures, said Dana Leinbach, ASG’s elections commissioner said.

“I think it’s really exciting that there is a referendum happening,” the Weinberg senior said. “It hasn’t been utilized in student government in a really long time.”

Leinbach said only one referendum is allowed per quarter, and if this one passes, it is considered binding student opinion for two years.

The results of the referendum will be posted on ASG’s website shortly after the polls close at 5 p.m. Students are also voting for ASG president and executive vice president. Weinberg junior Noah Star and McCormick junior Christina Kim are running against Medill junior Haley Hinkle and SESP junior Chris Harlow.