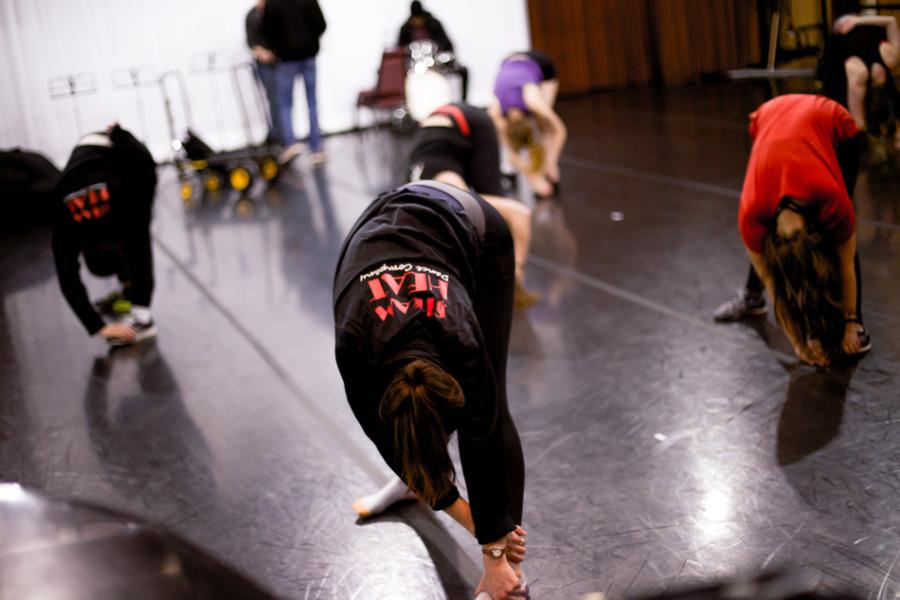 Members of Steam Heat prepare for their upcoming spring show, which features performances to songs from “West Side Story,” “A Chorus Line” and “Chicago.”

For SESP senior Alyssa Leonard, this weekend might be the last time she takes the stage at Northwestern. After four years as a member of musical theater dance company Steam Heat, Leonard will end her time with the group performing in the company’s sixth annual end-of-the-year show, Steam Heat Dance Company presents: Power.

Leonard has participated in musical theater her entire life and has been a member of Steam Heat since freshman year. For the last two years, she’s been the team’s artistic director.

“I was pleasantly surprised … that I could incorporate dance into my Northwestern experience,” Leonard said. “(Steam Heat) is everything I love about musical theater and dance all rolled into one group.”

The dance company, which started in 2009, emphasizes traditional musical theater-style dance, highlighted in this year’s show with numbers from productions including “Chicago,” “A Chorus Line” and “West Side Story.”

“I think what makes (Steam Heat) unique is we do have a pretty clear mission, which is to preserve musical theater and to create new music theater dance on campus,” said Communication senior Rebecca Haines, Steam Heat’s executive director. “It’s very clear from our show and pieces that we perform in other capacities that we really are true to our mission.”

Haines has been dancing since she was a kid. But when she became more involved in high school theater, dance started to play a smaller role in her life. As a freshman at NU, she saw a flyer for Steam Heat and said she realized she had to audition.

“Getting to continue to be involved in musical theater in this capacity has been a dream come true,” she said. “Steam Heat has become my family on campus.”

Haines choreographed two of the pieces in the upcoming show and said it’s been a fun challenge incorporating singing into some of the performances.

A live band will accompany Steam Heat during six of the Friday and Saturday performances, and group members will sing some of the songs live. The performances will take place in the Wirtz Center Ballroom Theater.

All of the pieces are centered around the name of the show: “Power.”

“We talked about what are some themes in our lives that we think are really important,” Leonard said. “And a lot of us talked about wanting to feel powerful and showing the best sides of ourselves and what we’re best at. From there, we took pieces that made us feel that way.”

Communication freshman Lauryn Schmelzer choreographed a number for the upcoming show, which features a mash-up of “Rich Man’s Frug” from the musical “Sweet Charity” and Beyonce’s “Get Me Bodied.” Schmelzer was inspired by the Beyonce music video, which utilizes some of Bob Fosse’s choreography and similar images from the “Sweet Charity” song. Schmelzer also changed the title of the dance to “Rich Girl’s Frug” for the show.

“Musical theater can sometimes be a very male-dominated industry,” she said, “so I think it’s really cool and really daring of (Beyonce) to adapt Fosse’s choreography and make it her own, so I wanted to keep up with the spirit of that.”

Schmelzer said she has been dancing since she was three years old and loves being able to continue pursuing musical theater dance through Steam Heat. She is the only freshman member who choreographed a number for the show.

Leonard said that in past years, members have chosen pieces to perform and then formed a theme around them. But this year, the theme came first.

“It helped us focus we wanted the audience to feel,” she said. “I think power is something that everyone can relate to … it really helped us carry out that specific part of our show.”

Dances featured in the show range from a routine performed to Robyn’s “Call Your Girlfriend” to “Forget About the Boy” from “Thoroughly Modern Millie.”

For Leonard, the most memorable performance will be the show’s finale, “One” from “A Chorus Line,” one of musical theater’s most iconic dance numbers. The piece features 32-counts of kicks at the end and was performed during Leonard’s freshman year as well.

“This week will be a roller coaster of emotions,” Leonard said. “Steam Heat is such an important part of my Northwestern experience. I cannot tease the two apart.”

Correction: A previous version of this story misstated the photographer who shot the accompanying picture. His name is Zachary Laurence. The Daily regrets the error.