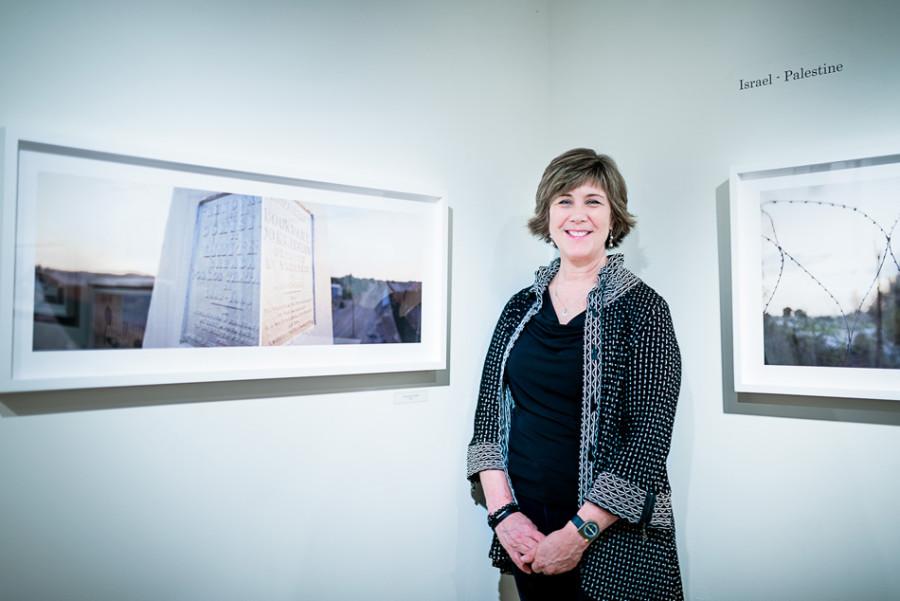 Photographer Terri Warpinski with her “Surface Tension” exhibit at the Dittmar Gallery. The exhibit will run in Illinois until May 8.

A group of young women dressed in turquoise robes stand in an old marketplace in Hebron, a Palestinian city. A mesh overhang, strung overhead, holds up a variety of plastic chairs, rocks and hangers.

“The mesh was put up by the Palestinians to protect them from the Israelis who were living above them that were throwing these things down on them,” explained photographer Terri Warpinski. “That was a colorful moment for me to realize that what we think we understand, the reality is much more complicated.”

The scene is from “Under Hebron [Settlement],” a photo featured in the newest exhibit at Dittmar Gallery, which launched last Thursday and focuses on the complications associated with border zones.

Warpinski’s exhibit, titled “Surface Tension,” will run in Illinois until May 8 and is currently on tour, having already appeared in Colorado and Nebraska. After Illinois, the exhibit will travel to New Mexico, New York, Slovenia and Arizona.

Warpinski, a 35-year veteran of photography and a professor of art at the University of Oregon, took the pictures in the exhibit over a span of multiple years.

“Surface Tension” features more than 50 color photographs focused on the Israel-Palestine border, the U.S.-Mexico border and the former Berlin Wall — all places Warpinski has a connection with.

She began taking photos for the series in 2009, when she was teaching in Las Cruces, New Mexico, a city near the U.S.-Mexico border. Having spent time in the region a decade earlier, Warpinski was surprised to see the significant addition of the fence at the border.

“In 2009, we were also globally celebrating that it was 20 years since the Berlin Wall fell. So it was the concurrence of having the nightly news during that summer talking about all the celebrations of Berlin in a post-wall context, while I’m looking at a fence that’s far more significant than the Berlin Wall was being built,” she said. “It was the juxtaposition of those two things that really got me going.”

Warpinski completed her photography for the exhibit in March 2014, when she made her last trip to the Middle East.

Her interest in the Israel-Palestine border stemmed from her travel to Israel in 2000 as a Fulbright Scholar. Because the division had not been built by the time she left, Warpinski wanted to revisit the region, see the divisions and “look at it as a parallel to what’s going on here between the United States and Mexico.”

She said she hopes to start a conversation about people’s perceptions of border zones and the societies that live nearby them.

“What I would hope that a viewer would begin to think about would be the question, ‘What do these groups of people have in common, if anything?’” she said.

Warpinski also mentioned similarities between the Israel-Palestine and U.S.-Mexico borders, including the politically driven nature of the borders and U.S. involvement.

“It’s a product of (U.S.) foreign policy,” Warpinski said. “Without that, neither one of them would have happened.”

Because the Berlin Wall is further removed in time from the other two borders, which were built during the 21st century, Warpinski included it as a “counterpoint, as opposed to being an example of a similar thing,” she said.

“I describe Berlin as being both a prologue and an epilogue,” she said. “It gives the historical context in terms of a precedent for a quick decision to create a difficult divide, but it also shows us that there are potential futures where something — which is as formidable as the Berlin Wall was — is somehow no longer present in the same way and functioning.”

Sharon Kim, the curator of the exhibit, appreciated Warpinski’s ability to juxtapose big-name sites of contestation with the ordinary.

“She really does a good job focusing on the little mundane things that really just do make up a place,” the Weinberg senior said. “It makes you really aware that these are places where people live, that are just like anywhere else on the planet, but they are these sites of great geopolitical contestation.”