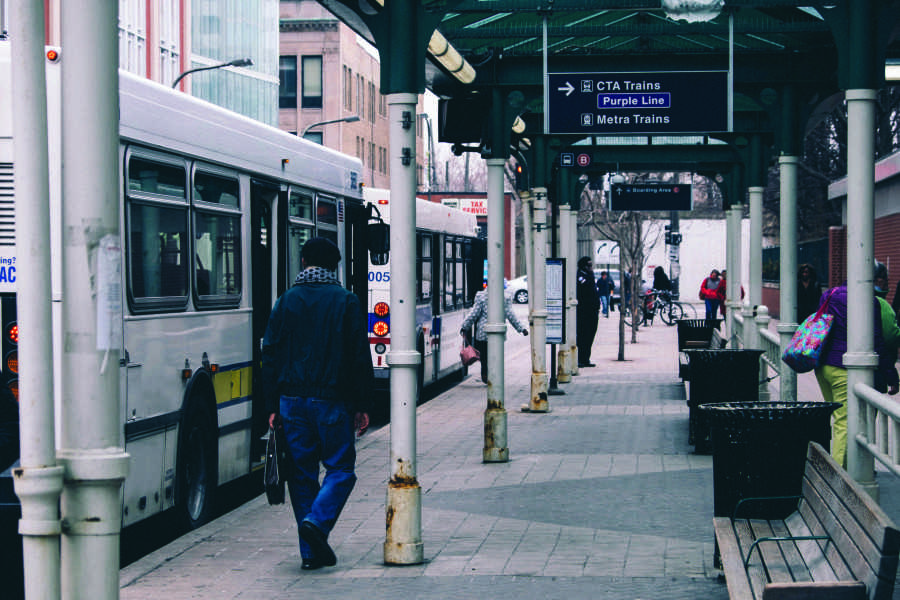 Buses wait at the Davis Street CTA station. Pace has plans to create a rapid transit line that runs between Evanston and O’Hare International Airport along Dempster Street.

Pace has selected Dempster Street as the second route for its new Arterial Bus Rapid Transit system, Pulse, which will provide express bus service between Evanston and O’Hare International Airport.

The suburban bus company has so far begun planning for the first line on Milwaukee Avenue, scheduled to begin service in 2017, Pace spokesman Patrick Wilmot said.

“Right now, we are putting all of our energy in the design and implementation of the Milwaukee line,” Wilmot said. “Our next step is to take what we learned from the Milwaukee project and apply it to the Dempster line, but we don’t have a timeline just yet.”

The routes are part of Pace’s planned Rapid Transit Network, which proposes 24 Arterial bus rapid transit routes operating in regular traffic that will provide high-speed and frequent bus service for northeastern Illinois, according to the company website.

The proposed network incorporates time-saving elements, including an express service which reduces the frequency of stops to approximately every half-mile, Wilmot said. He also said a series of design elements such as digital countdown signs and heating in stations during the winter, as well as elevated platforms on the buses, will provide more efficient transportation for passengers.

Pace also plans to implement an onboard technology in Pulse buses that sends requests to traffic signals to adjust light times if the buses are running behind schedule, Wilmot said.

Although the plans for the Pulse Dempster line have not yet been outlined, Evanston community members have responded favorably to news of the potential route.

Ylda Capriccioso, the city’s intergovernmental affairs coordinator, said it made sense that Pace prioritized the Dempster transit line because the route to O’Hare is highly traveled.

“The Dempster/Dodge intersection is an area that’s getting a lot of economic redevelopment and attention, so we’re hoping that once this (service) comes into play, it will provide more opportunities to get to and from areas in that business district,” Capriccioso said. “We think it’s a great program. We’re just waiting for it to get installed.”

Evanston sustainability fellow Kumar Jensen said he thought the potential Pace line would be a boon to Evanston commuters.

“It’s pretty exciting that there are going to be expanded transit opportunities for the community,” Jensen said. “It will definitely help the daily commuters, especially people who don’t have direct access to the Metra line or CTA.”

Pace has submitted an application to the federal Department of Transportation to receive a designation in the federal transportation program, which Wilmot said could secure federal funds to speed construction.