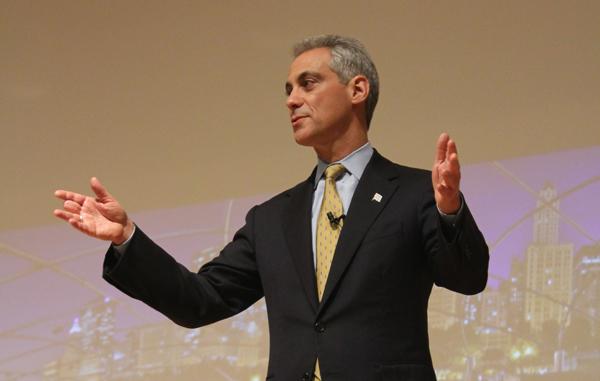 Northwestern students had mixed reactions to the results, with Emanuel (Communication ’85) winning 56 percent of the votes and Garcia receiving 44 percent with 99 percent precincts reporting as of 12:35 a.m. Wednesday.

Emanuel won his first term in 2011 after serving as President Barack Obama’s chief of staff. Garcia is the Cook County commissioner and previously served as a state senator and Chicago alderman.

Quentin Heilbroner, deputy communications director for College Democrats of Illinois, said he is a big fan of Emanuel, but thought Garcia’s challenge helped force Emanuel to better explain his policies, particularly the more controversial ones such as public school closings.

“Primaries make better candidates,” the Weinberg junior said. “Having to fight this battle has helped and will continue to help Rahm refine his message.”

In his first term, Emanuel oversaw the closing of almost 50 public schools that were deemed underutilized or underperforming. Most of the schools were located in black or Latino communities and the closings sparked outrage from teachers and families.

SESP junior Zane Waxman, who worked on Garcia’s election campaign, said he was disappointed with the results, though he still hopes Emanuel will get the message that many Chicago residents are unhappy with his polices.

“There’s still huge parts of the city that deserve the attention and support of the mayor’s office,” Waxman said. “The Loop has gotten its fair share of development and it’s time to expand that development outward.”

Waxman said the south and west parts of the city have been particularly neglected under Emanuel’s tenure. He also said the mayor’s re-election showed how important money is becoming, even in an election with two Democrats.

“I’m somewhat frightened that this re-election will give his office the impression that if they can raise enough campaign money then it doesn’t really matter how they treat the rest of the city,” Waxman said.

The success of Garcia’s grassroots campaign is important for NU students involved in political activism, said Communication sophomore Matt Fulle. Though he worked in the mayor’s office and supported Emanuel, Fulle said Garcia’s campaign provides a context for students such as those who worked on the NUDivest campaign.