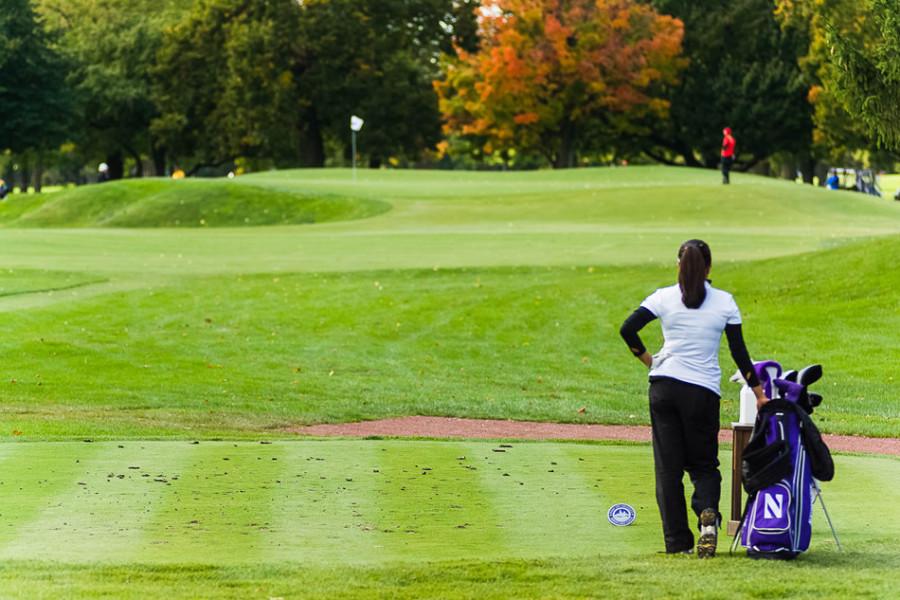 A Northwestern golfer sizes up her shot. The team struggled with long holes over the weekend, placing 11th in the Bryan National Collegiate.

Although Northwestern seemed more prepared this year, the Wildcats faced a result in North Carolina alarmingly similar to last year’s.

The highest ranked team on the field, No. 9 NU finished a lowly 11th in the 18-team Bryan National Collegiate in Greensboro, North Carolina, on Sunday, barely outpacing the team’s 14th place showing in 2014.

Last year’s result proved to be a low outlier in a spring where the Cats otherwise placed no worse than third in any other regular season event. NU can only hope this week’s performance will prove to be the same.

“I was disappointed with our finish this week, we never really got anything going,” coach Emily Fletcher said. “I think it’s been a challenging couple of weeks for us. We’ve seen some good that we haven’t been able to turn the corner on, and we got off to a poor start each day this week.”

The adverse weather the Cats faced at the Bryan Park Champions Course was similar to that of last week’s Liz Murphey Collegiate Classic, where the team had a solid showing.

Instead, only two of the five Cats starters shot below 40 on their first nine holes of the tournament on Friday and just one bettered 75 for the day, leading to a ninth-place spot after 18 holes.

The team’s struggles continued on Saturday, as NU retained ninth place with four rounds of 77 or higher.

Sarah Cho fell victim to those conditions, as her 77-79 start bumped her to a tie for 47th through 36 holes.

Unfamiliarity with this type of course and the exacting nature of the layout in these conditions proved to be a deadly duo for the freshman.

“The greens were really firm but they didn’t really stop. We really weren’t used to that as much as compared to other tournaments,” Cho said. “The conditions were tough and my game was just a little bit off, so that combo made it easy to make bogeys out there.”

Milder weather on Sunday did not abate the Cats’ fortunes, as the team actually sunk to 11th with less wind in the picture. In the end the Cats’ supreme depth faltered, with Cho and normal ace freshman Hannah Kim finishing outside the top 50.

No NU golfers placed in the top 20, as senior Hana Lee and sophomore Kacie Komoto each tied for 21st.

The Cats were 12th in the field in par-five scoring average at 5.13 — coming after consecutive first place finishes in that category to start the spring.

Lee noted that ample water combined with howling wind on long holes could either prove helpful or detrimental, and it was more of the latter for the Cats.

While that may have pointed to ball striking woes for the Cats, it was actually quite the opposite.

“I think we did a pretty good job of missing the ball in the right place on our approaches,” Fletcher said. “But our short games let us down a little bit. We weren’t able to chip or pitch the ball close and you’re not going to make many 15- or 20-footers for par. We just didn’t give ourselves very good chances for saves.”

Lee, an excellent ball-striker and the only NU player to shoot three solid rounds, was able to minimize her mistakes and produce birdies shortly after bad holes.

“I just had the mindset to be more aggressive on the next hole (after a bogey or worse), and sometimes that paid off,” Lee said.

The Cats have just one more event before Big Ten Championships, and are now coming off a season-worst finish. The longtime concern over short game is as potent as ever, and the presence of an ace has dissipated for the time being too.

The team’s confidence, though, isn’t shaken.

“We’ve played in really tough conditions these last couple of weeks, and I think it’s beat us up a little bit,” Fletcher said. “I’ve got full faith and confidence in these girls … They are still in good spirits, so we’ll just look to get some new momentum going.”