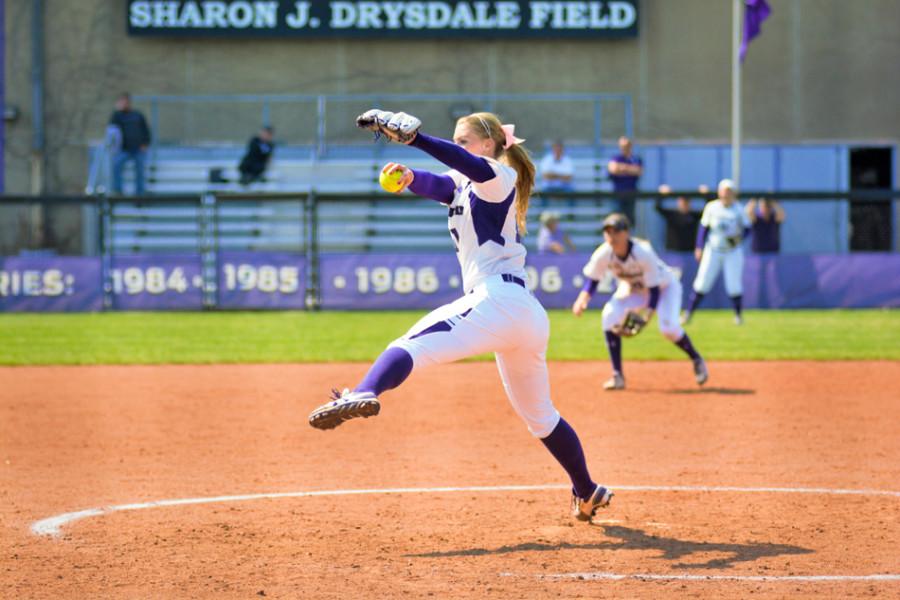 Kristen Wood winds up for a pitch. The junior had a record game Sunday, tossing a career-high 14 strikeouts.

The Wildcats (20-11, 8-0 Big Ten) held onto the top spot in the conference while rival Boilermakers (24-15, 4-5) dropped further back in the Big Ten race. It was a hard-fought series, with NU winning all three games despite outscoring Purdue by just 6 combined runs.

The series was a pitchers’ duel from the start, with NU’s offense facing Purdue ace Lilly Fecho in all three games, and Wildcat pitchers juniors Kristen Wood and Amy Letourneau holding down the fort at home. Wood ended the series with 27 strikeouts overall, and a career-best 14 strikeouts on Sunday.

NU kept the first two games close, beating Purdue 4-3 in eight innings on Friday off a Sammy Nettling walk-off home run in the eighth inning. Nettling, a freshman catcher, missed the first month of the season with an injury but has since come back to hit four homers in 10 games, including two during this series.

Saturday’s game remained close as well, with the Cats securing a 2-1 win over Purdue after a Nettling home run to left field in the fourth inning. Freshman outfielder Sabrina Rabin also scored in Saturday’s game off of a two-strike hit from senior outfielder Andrea DiPrima, who extended her hitting streak to 15 games by the end of the series.

Rabin — who had four hits and 3 runs in the Purdue series — and Nettling helped propel the Cats’ offense throughout the weekend, and their impact on the field did not go unnoticed.

“Freshmen are these great people who love playing the game, and our upperclassmen have done a great job of pulling them along too,” coach Kate Drohan said. “So when you see those things happen hand in hand, that’s when you see ballplayers start to do really special things on the field.”

Wood started Sunday’s game, finishing with a 5-1 win over the Boilermakers.

She and Fecho were both dominant in the early innings of Sunday’s game, with eight of Wood’s 14 strikeouts coming in the first three innings. NU’s bats came to life with two outs in the third when DiPrima hit a 2-run home run, bringing home senior infielder Anna Edwards and senior outfielder Olivia Duehr.

The Cats scored two more runs in the fifth inning off of a double by Duehr. Although NU rallied for runs in Sunday’s game, the series was defined by strong pitching performances from both sides.

“This series was a battle, Lilly (Fecho) is a great pitcher, and it was really good for us to see a pitcher like that,” DiPrima said.

Drohan agreed, noting that both pitchers played well and that “it was tough to come by runs” throughout the series.

The coach was extremely happy with the way her team fought for all three wins.

“I like the way our team competed, and even if we had a tough at-bat, we came back,” Drohan said.  “We came up with some key clutch hits, and that’s what good softball this time of year is all about.”

The Cats face UIC at home Wednesday and will then travel to No. 14 Minnesota for a conference series on April 10.