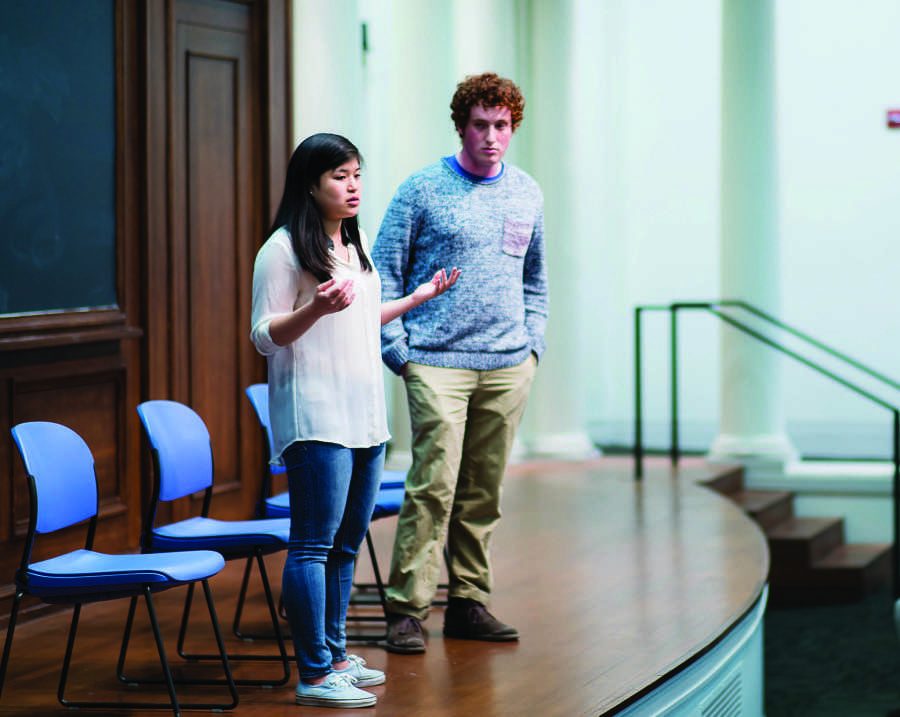 Weinberg junior Noah Star was on the debate team in high school, a fact he shares reluctantly.

“People make fun of me for that,” he said.

Star’s experience in the club, though, made him value his voice. Through his time at Northwestern, he has learned to place more value in other’s voices, he said, and his campaign for Associated Student Government president is based on the slogan, “Listen Then Lead.”

“What I’ve learned in ASG and at Northwestern is how to take myself out of the conversation in order to create a space where others can debate and participate,” Star said. “And I can create a culture of participation where people feel comfortable.”

Star, who just finished a year as speaker of the Senate, and Christina Kim, ASG’s vice president for services, have launched a campaign for president and executive vice president focused on accountability, accessibility and opportunity, calling on ASG to better listen to the student body before making decisions.

Like his evolution into someone who values others’ voices more than his, Star said he wants to “inject a healthy dose of humility into ASG.”

As an example, Star described ASG’s sustainability committee, which meets with groups such as Students for Ecological and Environmental Development, Real Food at NU and Fossil Free NU, formerly known as Divest Northwestern, to shape the committee’s actions.

Star said more of ASG should operate like that committee by valuing input from leaders outside student government.

“ASG certainly is part of the glue that brings (those meetings) together, but it’s no different from any other group that’s there except in the fact that it has resources, it has access to other administrators,” Star said. “That’s exactly what we mean by listen then lead.”

Kim, a Quest Scholar, said her experience within that group led her to run for executive vice president.

“Northwestern doesn’t advocate for all communities as well as I think it could,” the McCormick junior said. “I’ve been a part of a lot of communities that aren’t featured as the traditional Northwestern face, and that’s why I wanted to run.”

Kim is also a member of the Northwestern University Community for Human Rights.

Star and Kim’s platform calls on NU to reform Counseling and Psychological Services to allow students more than 12 free CAPS sessions throughout their time as undergraduates.

Kim said only having 12 free sessions suggests to students that CAPS can only help them so much, discouraging students from getting help.

“We see CAPS as not inviting as it could be,” she said. “I think (only having 12 free sessions) sets the tone for students who really need to seek out help or want to seek out help that CAPS isn’t really the place you can get support.”

In addition, Star said if elected, he and Kim would lobby for a more affordable cost of education. The two support “zero parental contribution” for families with incomes below $60,000.

Kim said the University could be losing many students who would want to attend NU but can’t afford it.

“So many of our peer institutions have had this in place for years, decades even,” Kim said. “Right now, when Northwestern doesn’t have this sort of policy … we’re losing out on a lot of students who could see themselves at Northwestern.”

Star and Kim also want to amend the ASG constitution so student groups elect the Student Activities Vice President instead of sitting senators.

“We think the Student Activities Vice President is the representative of student groups on campus,” Star said, “so we don’t understand why the selection committee is responsible for that selection, and not individual student groups.”

“As an international student, I’ve seen lots of critical conversations going on around campus,” she said, “and a consistent thing with ASG has been they want to lead many of these discussions. But I don’t feel like they’re the experts in those areas. One of the main things with Noah and Christina’s campaign is to let the student experts lead those conversations instead.”

Star and Kim are running against Medill junior Haley Hinkle and SESP junior Chris Harlow. The first debate between the two sets of candidates, which was sponsored by the Coalition of Colors, was held Monday. A second debate will be held at 8 p.m. Tuesday in Fisk Hall.