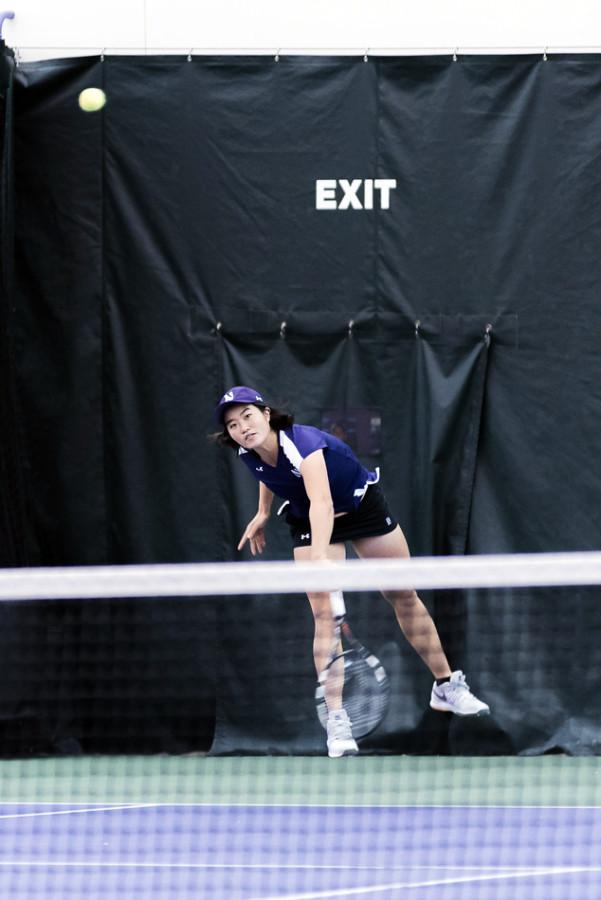 Lok Sze Leung delivers a serve. The only senior on the roster has been a steadying influence for the underclassman-laden team.

“One of the things that we always pride ourselves in our program is not overlooking anyone and not fearing anyone,” coach Claire Pollard said. “I’ve seen Maryland and a few of their players. I’ve never seen Rutgers play before, but we’re certainly not overlooking them.”

The Wildcats have never played the Terrapins or Scarlet Knights before in program history.

After a disappointing start to the season, NU recently got back on track, winning four of its past five matches. Still, its 6-1 loss last week to No. 12 Michigan, which is undefeated in the Big Ten, proved the Cats have a difficult road ahead if they want to repeat their Big Ten title.

Pollard said her team needs to work on resilience more than anything else.

“Just in general our resilience is poor as a team,” she said. “We know it. It’s like stamina, it takes a while to develop. You’ve got to be patient. You don’t just get resilience overnight, but over time.”

With almost three weeks left in the season before the Big Ten Tournament, the goal is to get grittier and tougher each remaining day of practice.

“Every day we’re just trying to get 1 percent better,” freshman Alex Chatt said. “Hopefully by the end of the (three) weeks we get about 30 percent better and that will make a big difference in the tournament.”

With Michigan and Ohio State undefeated in conference, the Cats seem unlikely to win the Big Ten regular season title. Chatt said the team is aiming for the third seed in the conference tournament.

Right now, NU is one of three teams in the Big Ten with a 3-2 conference record and sits behind Michigan, Ohio State, Michigan State (5-1) and Penn State (5-2). The Cats hope to use this weekend against two of the conference’s bottom four teams as a catalyst to propel it back up in the standings.

“We’ve been consistently having adversity on our team,” Chatt said. “Things just haven’t been going our way and luck just seems like it hasn’t been on our side. But we should win both of our matches this weekend, that’s our expectation.”

Chatt and her fellow freshmen Rheeya Doshi and Erin Larner have had to play big roles this season with the loss of sophomores Maddie Lipp and Manon Peri to injury. The subtractions may have hurt the team, but Chatt said her class’ increased role has benefited their development.

“It gives us a view of the action right at hand versus sitting on the sideline,” she said. “It gives us more of a sense of responsibility on the team.”

Now that they have the experience, the goal is to gain the resilience.

“We’ve been trying to breathe that attitude in practice and get more competitive in our matches,” Chatt said. “At the end of the day it has to come (from) within ourselves. Claire can say it as much as she wants, but at the end of the day, we have to bring it.”