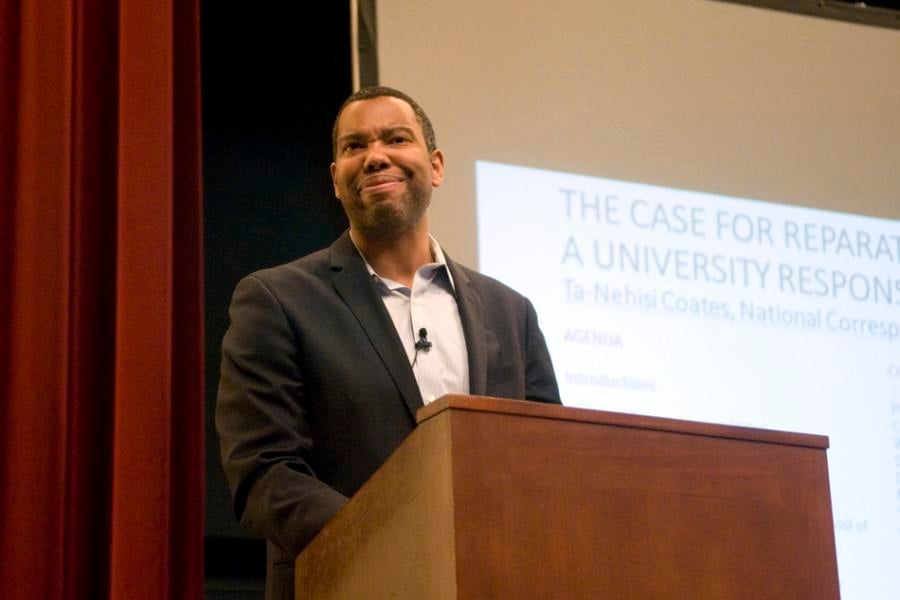 Ta-Nehisi Coates discusses segregational housing practices in the U.S. at Loyola University Chicago. The Atlantic writer visited the campus Tuesday, where he was the keynote speaker on “The Case for Reparations: A University Response.”

Echoing his award-winning piece “The Case for Reparations,” Coates discussed his proposal for reparations, the idea that the United States should give compensation to the black community because of America’s history of oppression. He analyzed how racist power structures throughout U.S. history have led to present-day issues such as education inequality and police brutality.

Coates served as the keynote speaker for the Loyola Center for Urban Research and Learning’s event, “The Case for Reparations: A University Response.”

The event also touched on local issues in the Chicago neighborhood. The North Lawndale community, where black people were excluded from housing, was highlighted in a video played at the start of the event.

After World War II, people exploited neighborhoods such as Lawndale by buying houses from white people and reselling to black people after tremendous price increases, Coates wrote in his award-winning article. With the Federal Housing Administration’s refusal to lend to black people, Chicago’s black community was confined to overpriced housing in the “black ghetto” neighborhoods of the South and West Side.

“The government effectively went out and incentivized racism, which needed no incentives to begin with,” Coates said. “In Ferguson, Missouri, you can have an entire system of government pillage on the people … This is a ritual for us.”

After Coates’ speech, the event featured a panel discussion with him, Loyola faculty members and Billy Brooks Sr., an activist from the North Lawndale community and a Black Panther member in the late 1960s.

SESP sophomore Matthew Herndon said the event was particularly relevant in light of recent race-related issues such as the Michael Brown shooting and the Northwestern Divest campaign dominating campus dialogue. Herndon said he’s observed that NU students can be “reactionary,” but often “don’t want to be uncomfortable.”

“There’s definitely an extent to which people abuse dialogue and abuse trying to analyze things at a deeper meaning when there’s a clear injustice that’s happening,” Herndon said. “Saying that these people are being too extreme, they’re being too in your face, that’s such a big part of Northwestern … which is frustrating but I think a lot of recent activism on campus is really making people uncomfortable in a good way.”

SESP sophomore Jacob Rosenblum, who read Coates’ reparations story for a SESP class, said the story made him think more critically about systemic racism versus isolated incidents of racism.

“It’s not just the actions of one person or saying a racist joke,” Rosenblum said. “It’s actual systems that affect people’s actual lives that we need to start acknowledging.”

Coates told The Daily after the event that he has been giving talks since his article came out last year. However, he said he is reaching the end of it with about two more weeks until he needs “to go and be quiet for a little while.”

“Be selfish,” he told The Daily regarding student activism on college campuses. “Be selfish. Pursue, you know, that thing that you know keeps you up at night. You can’t do anything on behalf of other people until you get it straight in your heart.”