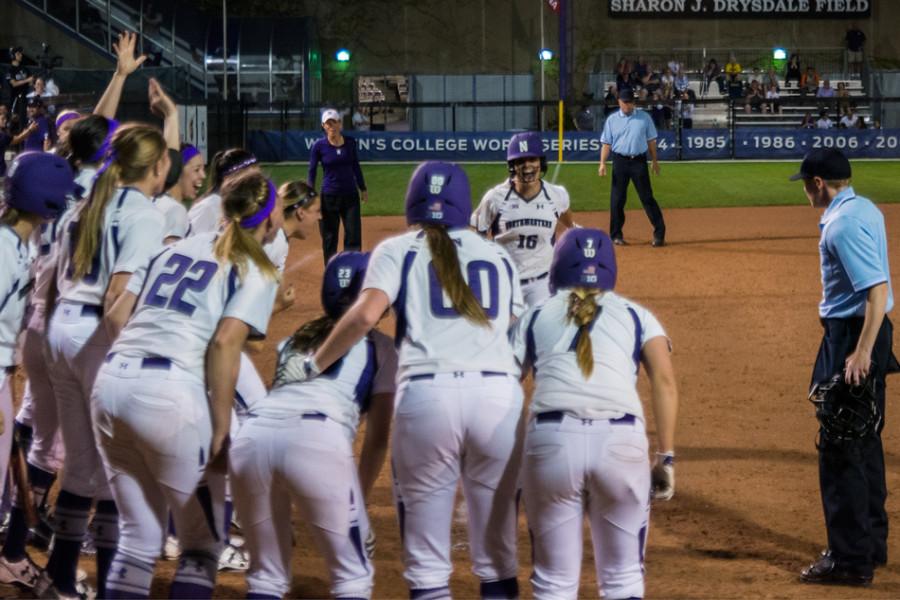 Northwestern celebrates a grand slam. The Wildcats had plenty of cause to be happy over Spring Break, winning six of seven contests.

While most students vacationed between quarters, the Northwestern softball team took no break from its winning ways.

The softball team opened up a three-game series on March 21 against Penn State, playing a doubleheader Saturday and the third game Sunday. In game one, NU knocked five home runs out of the park — the team’s highest single-game total since 2009 — defeating the Nittany Lions 10-0 in five innings. Junior Kristen Wood pitched a gem, striking out 11 batters while allowing only two baserunners, earning her fifth win of the season.

Game two of the Penn State doubleheader featured another big offensive performance by the Cats, who won 13-5. Freshman centerfielder Sabrina Rabin had three hits and scored three runs out of the leadoff spot. Junior starting pitcher Amy Letourneau struggled in her three innings of work, conceding five Nittany Lion runs, but Wood came on strong in relief, striking out seven in four innings.

The series finale against Penn State was a much closer affair, even going into extra innings, but NU prevailed 5-4. Senior leftfielder Olivia Duehr finished the series with four home runs, including a game-winning sweep-clincher in the top of the eighth off of Penn State reliever Marlaina Laubach. Wood didn’t fare as well in this one, but still pitched all eight innings and increased her win total to seven.

In their only loss of the week, the Cats fell to Hofstra 6-5 in 10 innings on March 24, the first game of a doubleheader in Hempstead, New York. Wood went nine innings this time before Letourneau relieved her in the tenth, giving up the winning run in the bottom frame. Senior rightfielder Andrea DiPrima hit two solo home runs for NU, but the rest of the lineup couldn’t get much going. The bottom of the Cats’ lineup went a combined 1-for-16 in the loss.

NU returned to the win column against Fordham in the second contest of the day, defeating the Rams 7-2. Six of the Cats’ runs came in a monster first inning, with the team tagging Fordham starter Rachel Gillen for eight hits, including a junior infielder Brianna LeBeau grand slam. Letourneau pitched much more effectively this time around, only surrendering six hits while striking out 11 batters and going the distance. The NU starter also helped herself out with a solo home run in the second inning.

The Cats’ first game of a doubleheader against Wisconsin can only be described as historic. NU plated its most runs in 32 years, shutting out the Badgers 19-0 in five innings and tying the home run mark set earlier in the week against Penn State. Rabin also chipped in with four hits — including two triples — and three runs scored. Junior shortstop Andrea Filler smashed her team-leading seventh homer of the season, and Wood turned in another great performance on the mound, striking out 11 while limiting Wisconsin to one hit.

In the final game of NU’s doubleheader, the Cats again poured on the offense, trouncing the Badgers 14-6 in five innings. Senior first baseman Julia Kuhn and DiPrima each hit home runs, with DiPrima tying Filler for the team lead at seven. Letourneau pitched a complete game but struggled, allowing six runs on seven hits and six walks despite 10 strikeouts. Wisconsin starter Taylor-Paige Stewart gave up all 14 NU runs, 12 of which were earned.

The Cats were scheduled for a third game against the Badgers, but it was cancelled due to poor weather conditions.

NU will look to continue its winning ways with a three-game series against the Purdue Boilermakers beginning Friday.