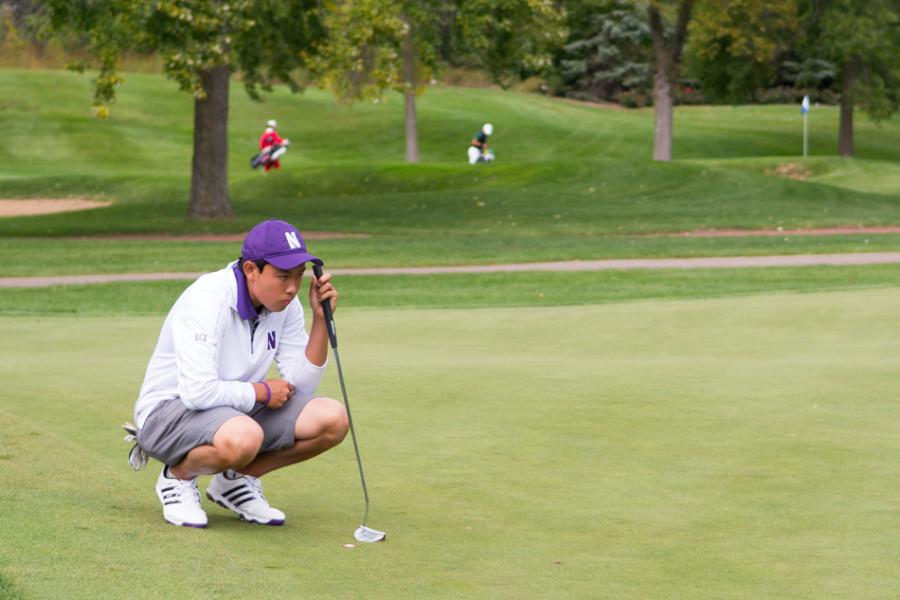 Dylan Wu lines up for a putt. The freshman helped Northwestern battle through a difficult field of opponents.

Facing a field highlighted by a number of the nation’s perennially elite golf programs, Northwestern struggled to gain traction at The Goodwin hosted by Stanford.

The Wildcats finished 16th out of 24 teams. Although the result was far from embarrassing given the strong level of competition, head coach David Inglis has high expectations for his young team and was a bit disappointed in the Wildcats’ finish.

“We all felt that we should have been able to close a little stronger,” Inglis said. “Anytime you’re in a tournament like that with so many good teams you want to be at your best and show that you can compete with anyone.”

The three-day tournament in Palo Alto, California, ran from March 26 to 28. After a tough opening round that saw the Cats post a score of an 8-over 288, the team was able to rally a bit on its second day, firing a 3-over 283 to move from 18th place to 15th.

But NU was unable to continue its charge on the tournament’s final day, posting a 9-over 289 and sliding down the tightly packed leaderboard one spot.

Although the result may not have been what NU wanted out of the tournament named for former Cats and Cardinal coach Wally Goodwin, head coach David Inglis believes his team is not far from where it needs to be as the heart of its season approaches.

“It was just a couple mistakes here and there that hurt our guys in some spots, and in a field with that many good teams those handful of shots can make a big difference in where you finish,” Inglis said. “But those mistakes are correctable, and we got some great prep out in California over spring break, so we feel good heading into the most important part of our season.”

The tournament was not without its bright spots for the Cats. Among them was yet another solid performance from freshman Dylan Wu, who said he has seen improvement in his game over the winter after a sensational fall season that saw him earn his first collegiate victory.

“It was definitely nice to see some of the stuff I worked on this winter start to pay off,” Wu said. “That second round was probably my best ball striking round of the year — I think I hit around 15 or 16 greens — so I definitely had some good things going. It’s just a matter of putting it all together at the right time.”

Junior Josh Jamieson’s mettle was tested after a catastrophic stretch on the back nine of his first round that saw him card a quadruple-bogey on the day’s final hole. Battling back after an opening 7-over 77, Jamieson was able to post a pair of 1-under 69s on the event’s final two days to finish in a tie for 64th.

“I think it was just a matter of staying positive, because I got a little bit down on myself that first day,” Jamieson said.  “Those are the situations where you just have to be able to knuckle down for the team, and I was happy I was able to do that.”

Inglis was impressed with the Scotland native’s resolve.

“It just shows his maturity and how far he’s come that he was able to battle back from a start like that,” Inglis said.  “That’s something we’ll need down the stretch here.”

The Cats’ other competitors included seniors Bennett Lavin and Matthew Negri, both of whom finished the week at 11-over and tied for 90th. Freshman Charles Wang rounded out the squad by finishing tied for 112th at 17-over.

Competing as individuals, freshman Sam Triplett and senior Scott Smith finished at 11-over (T90) and 21-over (T121), respectively.

NU will next tee it up April 11 to 12 at Ohio State’s Kepler Intercollegiate.