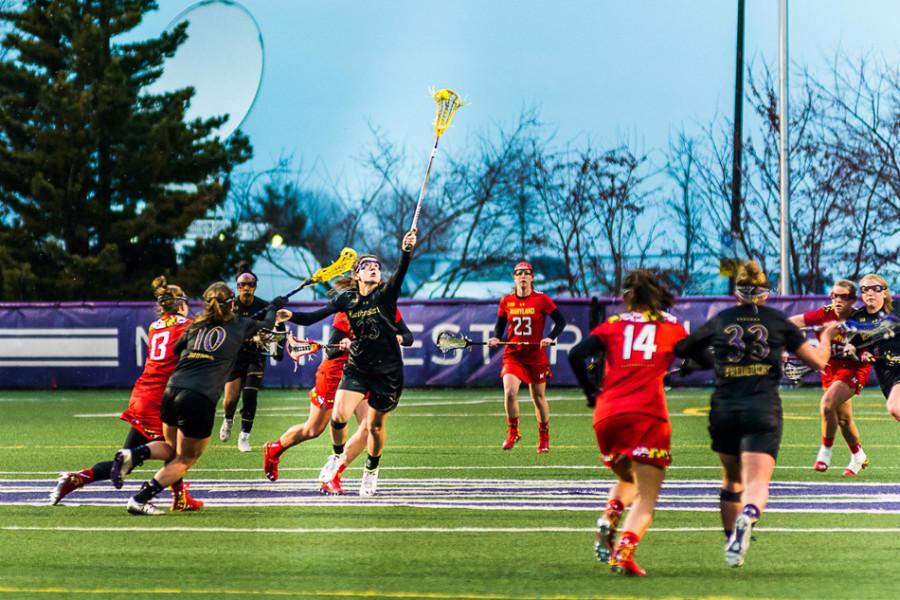 Junior midfielder Lauren Murray attempts to control a draw. Northwestern won two of three games over Spring Break despite struggling in the circle.

Northwestern’s punishing Spring Break schedule saw highs and lows from the No. 6 Wildcats, whose two hard-fought wins against top-10 opponents were marred by an ugly home loss to No. 1 Maryland.

The wins, against Syracuse and Louisville, marked NU’s second and third wins against top-10 teams this season.

NU (6-3, 0-1 Big Ten) lost 16-5 against the indomitable Terrapins (10-0, 1-0) in the Cats’ conference opener March 26. With first draw at 6 p.m., Maryland spent the evening ripping NU up and down the field after pulling away with just under seven minutes left in the first half with a 9-0 streak that lasted into the second half.

The Terps outshot the Cats 29-16, and won the draw 18-5 thanks to midfielder Taylor Cummings’ 13 draw controls.

Cummings, Maryland’s engine who also gave NU trouble in the Cats’ semifinal loss to the Terps in last season’s NCAA Tournament, had 2 goals and three assists, bumping her to No. 9 in the nation in points per game. She ranks No. 5 in the nation for draw controls with 75.

Meanwhile, Terps attacker Megan Whittle, in a class with Cats midfielder Selena Lasota and attackers Corinne Wessels and Shelby Frederick as one of the nation’s top freshmen, scored 5 goals against the Cats.

Maryland swept the Big Ten’s Player and Freshman of the Week honors for the second straight week after the win. Lasota still managed 3 goals against the Terps, and starts April as No. 5 in the country in goals per games, averaging 3.78.

Coach Kelly Amonte Hiller said her team would take the two-week break it had before the three-game stretch as a “second preseason,” and the Cats’ work showed in their first game back.

The win against Syracuse also marked senior Kara Mupo’s return. The team’s most veteran attacker sat the previous two games due to injury but came off the bench to lead her team against the Orange. She matched her career-high 5 goals for the fourth time.

The Cats’ offense clicked away despite the mainly back-and-forth scoring — Lasota and Mupo combined for a 3-goal streak in the middle of the first half that nabbed NU the lead they never relinquished. But the Cats also notched five impressive assists.

At the other end of the field, senior goalkeeper Bridget Bianco recorded 10 saves and saved Syracuse’s possible game-tying shot with 1:19 to play while the Cats were down a player.

Lasota and sophomore midfielder Sheila Nesselbush rounded out the scorecard against the Orange, tallying 4 and 2 goals respectively.

A week later, the two helped the Cats rebound from Maryland and overcome Louisville’s high-octane attack despite losing in the circle 10-14.

Cardinals attacker Faye Brust, No. 6 in the nation in goals per game, notched 6 goals against the Cats. Mupo countered with 4 goals of her own, Lasota added 3 and junior midfielder Kaleigh Craig scored 2.

Lasota has yet to scored fewer than 2 goals in a game this season.

The Cats start a busy April schedule with all but one of this season’s top-10 opponents (No. 9 Stony Brook) behind them. They play against Michigan in Ann Arbor on Thursday for NU’s second Big Ten contest and the Big Ten Network’s “Thursday Night Game of the Week.”