Women’s Basketball: Northwestern upset by Arkansas in first round of NCAA Tournament 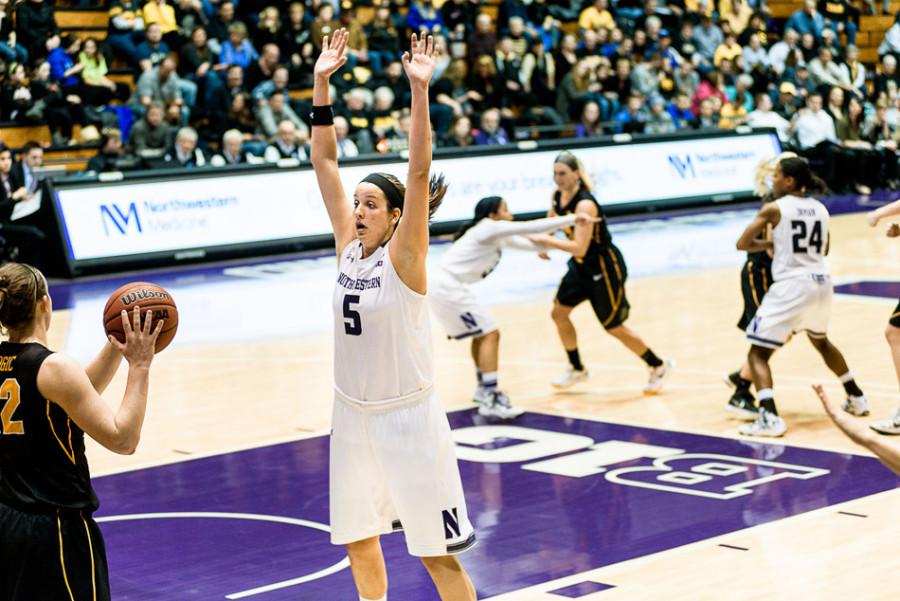 Alex Cohen guards the inbounds pass. The senior is a part of a class that has seen the Wildcats slowly grow into an NCAA tournament contender.

It was a heartbreaking end to a Cinderella season.

The Wildcats gave up a 12-point second half lead in the final eight minutes to lose to the Razorbacks 57-55 in NU’s first NCAA tournament appearance since 1997. The Cats end their season with 23 wins, the most the program has earned in 19 years.

But it was bitterly disappointing, as an offense that clicked for much of the second half, and had four players in double digits for the afternoon, could only muster four points in the last eight minutes and 43 seconds of play.

“They were playing really good defense. We went on our streak when we were playing together and moving the ball and I think we lost a little bit of sight of that,” sophomore forward Nia Coffey said. “I still think we did a good job of finishing out our plays and playing together, we just didn’t make shots when we needed to.”

Being away from the tournament spotlight for nearly two decades can have an adverse effect, and it showed early on.

Jitters were clearly a factor in the opening minutes of the contest, as Arkansas steadily pulled ahead as the Cats tried to shake their nerves. After falling behind by a margin of seven, NU went on a 9-0 run to pull ahead with just more than 12 minutes left in the stanza.

The half would end tied at 23.

Relentless NU defense held the Razorbacks to just 31.8 percent shooting, but the Cats also had trouble with possession, struggling with turnovers and offensive rebounds. NU is one of the poorer rebounding teams in the Big Ten, but Arkansas’ 11-3 advantage in first half offensive rebounds was still uncharacteristic, and for one of the best teams in the Big Ten in turnover margin, losing in that category 10-7 in the opening period was certainly a shock.

But the Cats that came out of the locker room for the final period appeared a completely different team.

In the opening moments of the second half, it was clear that NU was exactly what coach Joe McKeown insisted they be: hungry.

The Cats went on a 6-0 run to open the second stanza while swarming the Razorback offense, forcing Arkansas to use an early time-out. NU maintained their total team intensity and secured a solid 51-39 lead with just under nine minutes to play.

Yet, the Razorbacks fired back. Arkansas went on a 10-0 run to make it a one-possession game with less than six minutes to go. Unyielding Razorbacks defense stopped the Cats from scoring a single point in the last 3:59 of regulation.

Though NU sent Arkansas to the free throw line several times in the last minutes of the game, they were unable to capitalize off missed shots. The score read 57-55 when the final buzzer sounded, dashing the NCAA dreams of the 2015 Cats.

It was NU’s inability to secure crucial free throw rebounds in the final minutes that lost the game.

“Obviously when you lose a game you feel like you had great chances to win, you look back and say, we didn’t block out on free throws, and that became the difference in the game,” McKeown said. “[It was] us not being able to block out on miss free throws and when we did, when we did get the rebound, we couldn’t retain the possession.”

In the end, the first-half woes came back to bite the Cats in the final period as well. Arkansas out-rebounded NU 42-37, and grabbed a hefty 20 offensive rebounds.

The Cats also turned the ball over 19 times to Arkansas’s 10 after it was all said and done.

Coffey, junior guard Maggie Lyon and sophomore guard Ashley Deary combined for 36 points on 54 percent shooting but were responsible for 14 of the turnovers themselves.

NU simply couldn’t afford so many mistakes against a solid Razorbacks squad.

“We came in knowing that Arkansas was a great team and had a great year, and we had a great scouting report on them,” senior center Alex Cohen said. “Ultimately, it came down to one play and we weren’t able to finish the game.”

It was heartbreaking losses for the Cats, who have shown time and time again this season their ability to finish out close games.

Yet, McKeown says that this benchmark season is just the beginning for his players.

“The future is really bright for us. We have people really excited for our program, our crowds were great this year,” McKeown said. “In a brutal league like the Big Ten, we won 13 games. We set a lot of milestones for us to build on.”