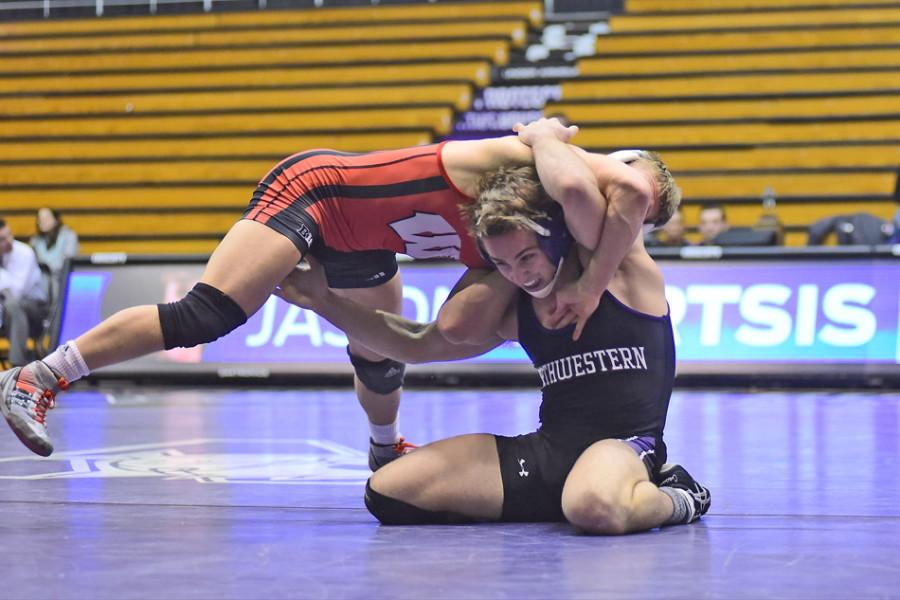 Tough Big Ten competition has mashed Northwestern lately. On Sunday, though, the Wildcats will take a reprieve from top-15 teams, with a home match against No. 24 Rutgers.

Northwestern will seek individual gold at the NCAA Championships, as one wrestler is set to defend his national title and another is pinning for his first in the last competition of his college career.

In fact, the Wildcats are downright greedy for those national titles.

“(Our goal) is to win as many national titles as possible,” coach Drew Pariano said.

Action commences for the biggest event in college wrestling at the Scottrade Center on Thursday in St. Louis, Missouri, with six Wildcats athletes on the docket.

The main draws for NU are 149-pounder Jason Tsirtsis and heavyweight Mike McMullan. Both are No. 2 seeds in their respective brackets, and are each gunning for a championship title.

Tsirtsis entered the event as a No. 5 seed last year, and memorably fought through a series of close matches on his way to a national championship.

The sophomore captured his second consecutive Big Ten title last week and was pleased with his aggressiveness at the event, saying that he hoped to keep his offense going and in attack mode throughout the NCAA Championships.

As for harping on keys from his run last year, he didn’t want to look back at what’s been.

“Last year’s in the past and obviously it helps me to understand the process of the tournament,” Tsirtsis said. “But I’ve just got to be consistent every match and do what I need to do.”

McMullan, meanwhile, has not attained the top glory yet, although he has been quite close with previous finishes of third, second and third at the NCAA Championships.

Obtaining his first Big Ten title last week was a major monkey off the back and McMullan could do so again at NCAAs with a title there. The senior also pointed to committing to a more offensive approach at NCAAs.

“With the bigger guys, there’s a tendency to slow the action down and make it a one-move match,” McMullan said. “The trend I had in the Big Ten Tournament was high scoring and a lot of offensive wrestling, so if I can keep that style going into this event, I think I’ll be good.”

As for the rest of the pack, Pariano’s goal of national championships will be a little bit tougher to attain. Seniors Pierce Harger, at 165 pounds, and Alex Polizzi, at 197, have an outside shot with the No. 7 and No. 11 seeds in their classes, respectively.

Juniors Jameson Oster, at 141, and Dominick Malone, at 133, are both unranked at their weight classes.

But there is some optimism to be had there.

For much of the dual meet season, NU floundered when wrestlers outside of the Tsirtsis, McMullan, Harger and Polizzi group couldn’t win matches. That changed late in the season, as Oster and Malone each won their last three bouts in dual meet competition. And like teammates Tsirtsis and McMullan, the turn of events all came down to better aggression.

“I’m just looking to put my opponent in my position and dictate the pace,” Oster said. “I was able to do that more at the end of the season, and I’m looking to continue that.”

Whatever the team’s finally tally of individual national titles, NU’s goal is also to improve on the cumulative finish.

The Cats placed ninth as a team at the 2014 NCAA Championships due to points from Tsirtsis’ national tile, McMullan’s third-place showing and Harger’s eighth-place finish.

NU has all three of those players this week in St. Louis, and an extra wrestler this time around with six, rather than five, qualifying for NCAA Championships.

That means not only is a third top-10 showing in four years expected, but a higher performance is believed to be in the cards.

Pariano said he wants his team to gather 66 points, which would have been enough for fifth place last year.

With the slate of returning characters, though, and the increased depth, McMullan was willing to offer one better.

“We’re in a good spot, we have a lot of guys who can go out there and score points and win matches for us,” he said. “If everybody does their part and wrestles above their seed, I think we can finish top four.”