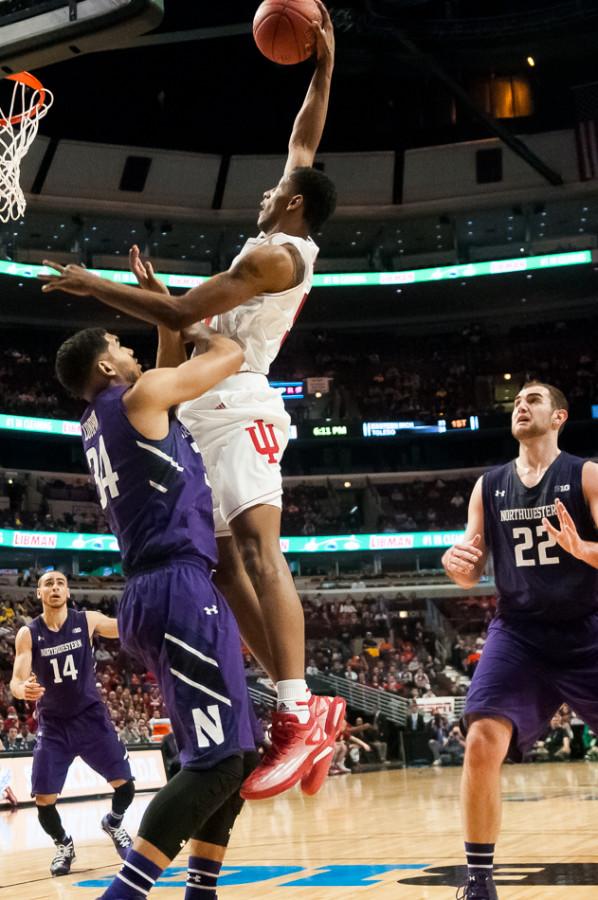 Sophomore forward Sanjay Lumpkin gets dunked on by an Indiana player. The Wildcats had no answers for the Hoosiers on Thursday, falling to Indiana 71-56.

Watching Northwestern trail by double digits throughout Thursday’s game, it was difficult to imagine the Wildcats had beaten this same Hoosiers team only two weeks ago.

Indiana dominated NU on the offensive glass and forced the Cats into endless bad shots on the way to a convincing victory. The Hoosiers jumped out to an 18-point lead in the first half when NU went nine and a half minutes without a field goal. The Cats lingered just close enough to inspire hope until midway through the second half, when Indiana’s shots began to fall.

By playing a 2-3 zone, NU relies on its opponents to miss open jump shots, and though the Hoosiers played along for a while, they eventually got hot. The Cats particularly struggled to contain Hoosiers freshman guard James Blackmon Jr., who finished with 25 points on 8-15 shooting, 5-10 from 3-point range as well recording seven assists.

Indiana seemed dedicated to stopping junior center Alex Olah, who shot only 3-10 but reached the free-throw line 9 times, converting 6. Olah was second on the Cats in scoring with 12, behind freshman guard Bryant McIntosh with 13.

After an impressive stretch late in conference play, the Cats petered a bit toward the end of the season, and Thursday was a continuation of that trend.

NU’s season is over, unless coach Chris Collins and company choose to accept a bid for the College Basketball Invitational, a tournament open to teams that do not qualify for the NCAA Tournament or National Invitational Tournament.

When seniors JerShon Cobb and Dave Sobolewski were removed from the game for the final time, they exchanged long hugs with Collins and cried as they reached the bench.
Email: [email protected]
Twitter: @AlexPutt02