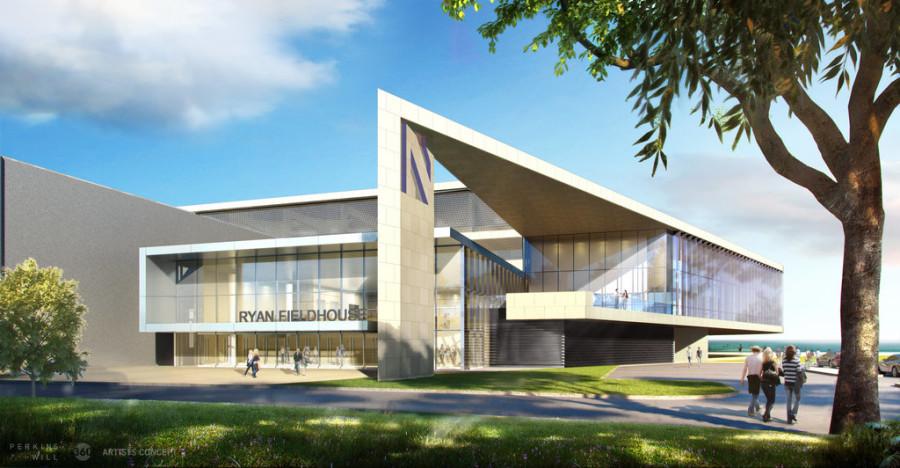 Ryan Fieldhouse,​ depicted above in a rendering, will be​ a multipurpose facility for ​athletic practices and competitions​ and​ recreational activities. The University announced on Wednesday that it ​plans to file permits ​to begin construction on the ​f​ieldhouse​ in spring​.

Northwestern will file a permit request with the U.S. Army Corps of Engineers to begin facilitating construction of Ryan Fieldhouse, the University announced Wednesday.

The fieldhouse will be a multipurpose indoor facility for football practice and other sporting and non-sporting events. The fieldhouse is part of the new Lakefront Athletics and Recreation Complex that University officials hope will usher in a whole new quality of facilities for athletes and students.

The complex will include renovation of the soccer and lacrosse field and of the field hockey field, along with the creation of an outdoor football practice field for varsity practices as well as intramural competitions and other purposes. Construction for the fields will begin in the spring.

NU also announced plans to work with the U.S. Fish and Wildlife Service, the Illinois Environmental Protection Agency and the Illinois Department of Natural Resources in the approval process before construction begins on Ryan Fieldhouse.

“We are thrilled to take the first steps on a truly transformational project for our Wildcats student-athletes and the entire Northwestern University community,” NU athletic director Jim Phillips said in a statement. “This institution cultivates and expects excellence, and this complex will be second-to-none in allowing us to continue to provide a world-class experience.”

A University spokesman said there is no timetable at the moment for when those permits and approvals will be secured and construction on Ryan Fieldhouse can begin.

The lakefront complex was originally approved in 2012, and as recently as last year it was believed that construction would begin in early 2015 with the complex completed within two years.

The construction of the practice fields will start in earnest in the spring, with all three projects expected to be completed by spring 2016.

Field hockey, lacrosse and both soccer teams will be displaced in the meantime. Replacement venues have not been determined, according to the University.

Lacrosse will play out its season this spring before renovation starts, while work on the field hockey field will begin sooner, the official said. He said the hope is for field hockey to be renovated in time for the fall season.

The lakeside facility project was originally slated with a $220 million price tag, but Phillips recently said that the price has increased, although he declined to offer a new figure at that time. Phillips told The Daily last week that the project is a must for a program that has long lagged behind its Big Ten counterparts when it comes to facilities.

“We have to make them more competitive,” Phillips told The Daily. “And I think that is why this project is so important. This isn’t an individual project, it’s not just for one team, this is for 19 teams and for 492 student athletes.”

But Phillips sees it as more than an athletics upgrade.

Phillips confirmed to The Daily last week that Ryan Fieldhouse is a place he hopes to have freshman convocation and Dance Marathon.