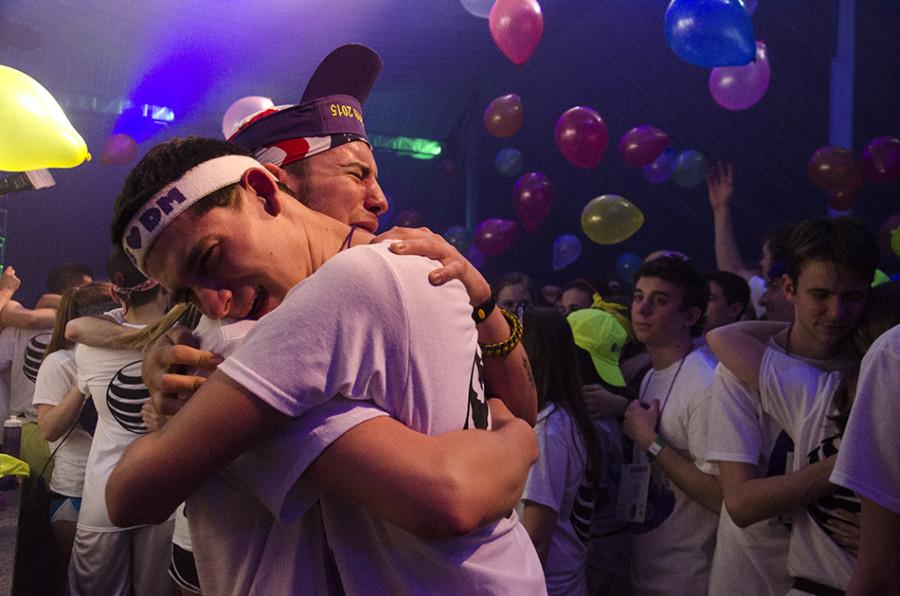 Wearing tutus and sequin dresses, a record number of children benefiting from the funds raised by Dance Marathon danced alongside Northwestern students in the tent this weekend.

“(The kids) really enjoyed it, especially being around college students, like a big college party,” said Tennille Palms, who is a member of a Hero Program family. “They feel really popular.”

Palms and her family took the stage during Block 3, sharing the story of their son’s battle with sickle cell anemia. In a departure from previous DM beneficiaries that have traditionally rallied around fundraising for a specific disease, the Starlight Children’s Foundation Midwest benefits children with all chronic illnesses. As a result, a wider swath of heroes and their families participated in the 30-hour event, telling stories about what the Starlight Foundation has meant to their families and how the students’ efforts will contribute to its future.

“This year you are the starlight,” said Jacquie Hart, the CEO of Starlight. “You’re embracing all children, regardless of their diagnosis, whether it’s common or rare. This year you chose to put your arms around all children, from premature babies until they age out of children’s hospitals.”

Falling short of the fundraising totals for the past two years, DM raised a total of $1,130,979. This is the first time since 2010 that the organization raised less money than the previous year.

As balloons fell and the annual “Save the World” cover played, dancers screamed, hugged and shed tears. But veteran dancers said at the event the energy was notably lower than in years when record-breaking totals were announced.

Despite the decrease in the total raised, DM executive co-chair Ander Aretakis said he couldn’t be prouder of his executive board and dancers’ efforts.

“It doesn’t matter what the final number is,” Aretakis said. “What matters is the incredible impact this event has on thousands and thousands of children.”

DM wrote the Starlight Foundation a check for $836,489.57. It was the second-largest check the organization has ever written, almost $100,000 less than the check it gave Team Joseph last year. The Evanston Community Foundation, DM’s secondary beneficiary, received $92,943.29.

Whether it was their first DM or their last DM, dancers leaving the tent said Block 10, which was marked by fundraising announcements, a celebrity video from Julia Louis-Dreyfus and speeches, was by far their favorite part of the event.

Although several 120-hour club members said DM gets easier each year, for Weinberg senior Lissa Marten her final DM was the most difficult to date.

“I would say it was harder probably because I was trying to be a dancer instead of being on a committee,” she said. “It was a lot harder seeing friends on committees take breaks when I couldn’t, and the thrill of it has somewhat worn off, and you know what to expect and bad things that will come up.”

Marten said every year is unique because there is a different beneficiary. She said the decline in the fundraising total did not change the event for her.

Medill freshman Josh Glicksman participated in DM for the first time. He went into the tent very nervous about the next 30 hours but left saying he hopes to return next year.

“Other than Block 4, every block was amazing and everyone had such a great attitude,” Glicksman said. “The Hero families put everything in perspective.”

The Delta Gamma/Zeta Beta Tau powerhouse team added a new fraternity to their group this year, Alpha Iota Omicron. The trio raked in the highest fundraising total for large teams with a total of $140,725.79.

“Honestly, a lot of us never really thought of (doing) an event with this magnitude,” said AIO president Vivek Magati, McCormick junior, after the announcement that his team won. “Now that it’s coming to a close and the fact that we were able to overcome it is just really staggering for a lot of us because none of us have done this before.”

As dancers linked arms and swayed after the fundraising totals were announced, DM emcee Diego Henriquez-Garcia reminded dancers DM doesn’t end when you leave the tent.

“Every blister on your foot, every day for the next three weeks that you can’t talk properly and sound like this, are a gift,” he said. “If you take one second every day to remember how you feel right now and how you don’t remember Blocks 2 through 9, because they don’t matter in comparison to this, and if you can apply that just a little bit to a single action everyday, you’ll make this world a better place.”