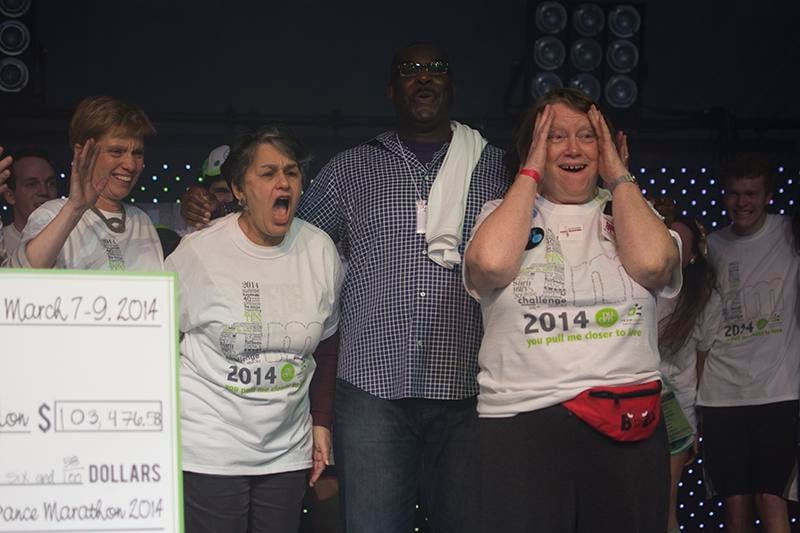 Evanston Community Foundation President Sara Schastok (right) reacts to receiving a check from Dance Marathon for $103,476.58 in 2014. DM 2015 will be Schastok's last year as CEO and president of DM's secondary beneficiary.

After 15 years at the helm of the Evanston Community Foundation, Sara Schastok will retire by the end of the year, which also marks a milestone in her long relationship with Dance Marathon.

ECF has been DM’s secondary beneficiary for the past 18 years. Schastok, ECF’s president and CEO, has expanded the “mutually beneficial” relationship between the two organizations and has grown ECF to be the organization it is today, said Summer Delaney and Louis Dietchweiler, DM’s Northwestern and Community Relations co-chairs.

“Sara is totally central to all of this,” Dietchweiler said. “Sara Schastok is one of the reasons the Evanston Community Foundation is as successful as it is.”

Schastok joined ECF, which provides grants to local organizations among other programming, in December of 2000 and was the first full-time staff member in the foundation. Prior to her arrival, ECF’s board comprised volunteer members with a leader who directed Evanston projects on a part-time basis. When Schastok started at ECF, ECF gave out about $85,000 a year in grants, she said. DM contributed about $25,000 because ECF was given about 5 percent of the total amount raised by DM at the time.

Since then, the total percentage of DM funds given to ECF has increased to 10 percent.

In 2008, ECF hired a part-time program officer who was able to help organizations with projects. Schastok had singlehandedly done most of ECF’s work before this time, including writing the annual report, running the organization and raising money for grants, she said. The addition of the program officer made it easier for projects supported by grant money to come to fruition, she said.

ECF’s growth allowed for the development of Community Catalyst grants, which are more informal grants given throughout the year as important needs arise. The money for the catalyst grants, which started two years ago, is provided primarily by DM. One project a catalyst grant helped fund was the “RACE: Are We So Different?” exhibit, a collaboration between the YWCA Evanston/North Shore and the Illinois Holocaust Museum and Education Center. The $5,000 grant given to the exhibit was the biggest catalyst grant ECF has given so far.

Schastok said DM has grown so much in the past years that the foundation has been able to expand into different types of grantmaking. In addition, Shastok said the organizations’ similar values also help the relationship.

“DM cares about kids and so do we. It’s one of those wonderful matches,” she said. “We never would have had the money for those Catalyst grants without DM.”

To decide which organizations and programs will be receiving grant money this year, ECF’s grants committee will review 77 proposals received by the foundation in February, Schastok said. DM’s executive co-chairs Ander Aretakis and David Ryan sit in on the grant board and help review grant applications along with other board members, Delaney said.

“We’ve just said bring it on,” Schastok said. “We want to invest in the things that seem to be the best value for the community this year. I think ECF has been successful because we’re able to make good work better thanks to Dance Marathon money that goes further.”

But ECF’s relationship with NU does not stop at DM, Delaney said. ECF has a great relationship with the University through work-study jobs and other service opportunities, she said. In addition, some NU staff is on the board of trustees for the foundation, which presents a direct link between the two, Dietchweiler said.

“Even though there are those mutually beneficial factors, Northwestern students do reside in Evanston,” he said. “Therefore, they are improving the community that they live in, and ECF is a great outlet in which to make the community a better and stronger place.”

During Block 2 this year, Schastok was honored for the many hours she has committed to DM. The DM emcees presented to her a T-shirt, officially making her a member of the “450-hour club.”

Although Schastok will step down from her job as president of the foundation, she will still be the senior philanthropic advisor for the foundation next year. Schastok said she will have some continuing relationship with DM and will probably make appearances at DM events next year. She said she will definitely visit the weekend of because this has been so much a part of her life every spring for 15 years.

“Just as you guys are passionate about certain causes, we’re continuously passionate about Evanston and making it the best place that it can be for most people possible,” she said. “We think that Northwestern students are a creative and wonderful part of community, and it’s great to have projects that we can do together.”