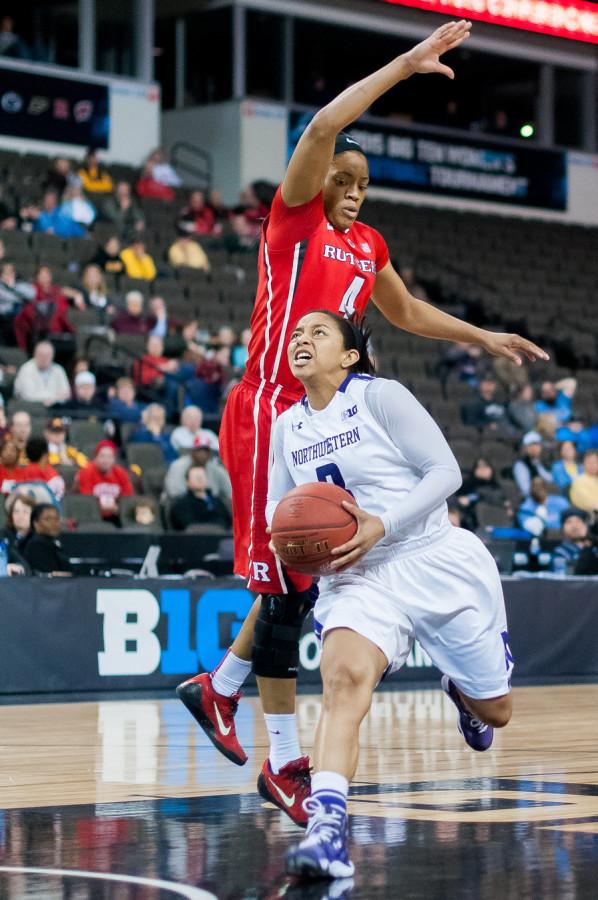 Ashley Deary drives to the basket. The sophomore guard ignited Northwestern's defensive surge in the second half but also contributed on offense with 12 points and finishing as one of five Wildcats players in double figures.

And the Cats battled to do so.

“We had struggled,” coach Joe McKeown said. “Rutgers really (defended us) in the first 10 minutes of the game.”

It was an ugly start for the Cats. NU turned the ball over on each of its first three possessions and racked up 14 turnovers in total in the opening half.

Not only did the turnovers prevent the Cats from getting shot attempts, Rutgers scored off the loose balls. The Scarlet Knights had 15 points off turnovers in the first half and took 13 more shots than NU.

The saving grace for the Cats was free throws. Rutgers had three players pick up three fouls in the first half and NU took advantage.

The team went 12-of-17 from the line at the start of the game to keep the contest close.

“It was really important because it kind of got them out of their sync and they had to drop back into a zone,” sophomore guard Ashley Deary said. “So it gave us motivation to just keep attacking and do what we can to get to the rim. If we’re not knocking down shots, we can at least hit it at the line.”

With just over four minutes remaining in the opening 20 minutes, NU looked at a 15-point deficit. But a 12-2 run by the Cats would bring them right back into the game.

The Scarlet Knights scored the final 5 points of the half and took a 37-27 lead into the break.

“(Getting it to 37-27) was important, because Rutgers had control most of the first half up to that point,” McKeown said.  “We made that little run. Even though we went in down 10 we felt like we had momentum. And I thought that was really important.”

In the second half, it was a brand new NU offense. The Cats went on a 21-4 run coming out of halftime and took control of the game.

While the offense was coming into its own, NU’s defense hit it up another notch as well. Sparked by Deary, the Cats’ shut down the Rutgers offense.

“I thought that really opened some things up,” McKeown said. “And just was able to get us some confidence on the defensive end, because you’ve got to score.”

Deary had 8 straight points for the Cats at one time during the run and gave them their first lead of the game at 40-39 with 15:19 remaining.

Not to be outdone, junior guard Maggie Lyon scored some big buckets for NU as it started to pull away. The lefty sharp-shooter had two impressive right-handed shots as she scored 8 of her game-high 15 points in the second half. She was also the game’s leading rebounder with 10 boards, nine of which came on the defensive end.

“We didn’t play as much energetic basketball in the first half,” Lyon said. “But I think we have a whole team to call us out on it and hold each other accountable. I think that’s what the second half really drove us to get that lead is just kind of playing together and knowing that we were better than what we were in the first half.”

What was arguably the most impressive part of the second half was that NU did so much damage with sophomore forward Nia Coffey on the bench due to foul trouble.

Coffey was the Cats’ leading scorer and rebounder in the regular season and earned All-Big Ten First-Team honors, but even with her off the court, the team was able to maintain its lead.

“I thought Lauren hit a big jumper,” McKeown said. “Alex Cohen made big plays. People stepped up. Maggie, Karly… Ashley had the ball a lot she also found ways to score. That was important.”

Coffey was still able to provide a solid contribution, as she was one of five players to score in double figures. Deary, Coffey and senior center Alex Cohen all finished tied with 12 points and junior forward Lauren Douglas added 10 off the bench.

The 62-57 victory was the Cats’ ninth win in their last 10 games. It also puts them in the Big Ten Semifinals in a rematch against the only team to beat them in the last 36 days, No. 5 Maryland.

Piling up the victories is good enough for the man in charge.

“In March, whether you win by 1 or 10, you just want to win and move forward,” McKeown said.